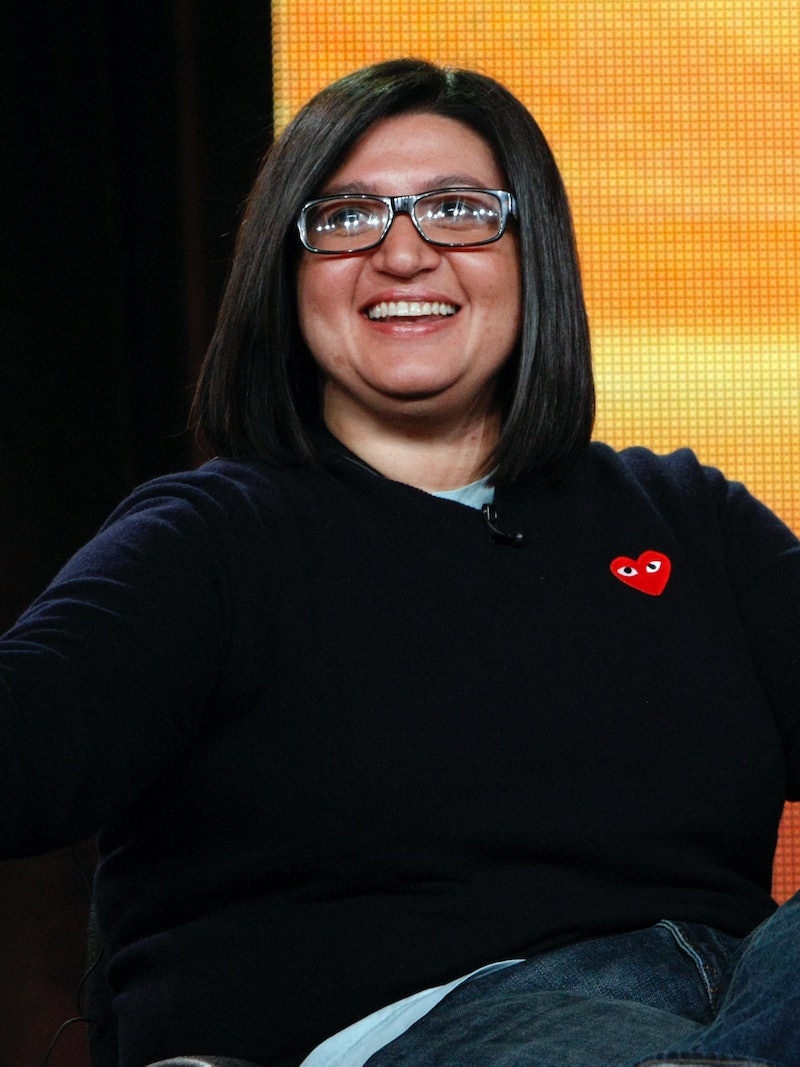 The first episode of Don’t Trust the B In Apartment 23 features the kind of opening you don't often see on network TV: titular b Chloe (Krysten Ritter) — a high-cheekboned, raven-haired sorority girl from hell — is screwing her roommate June’s fiance, on top of June's birthday cake. They writhe. They moan. He drizzles champagne on her cleavage. Then, June walks in — which, we later find out, was all part of Chloe’s plan. Now that he's been revealed as a cheater, June can finally dump him and move on with her life.

It’s the kind of perversely logical, absurdly vulgar, and surprisingly tenderhearted moment that only Nahnatchka Khan, creator of TV comedies Don't Trust the B and Fresh Off the Boat, would be able to write. “I had the idea of writing this unapologetic woman, and I wanted to challenge myself with something like: how do you start with something irredeemable and then come back from it?,” Khan tells Bustle in a recent phone interview. “Then the challenge becomes, how did she get there and why is she doing it?”

Khan is perhaps best known for her work on the groundbreaking, critically acclaimed Fresh Off the Boat. But she first made her mark with Don’t Trust the B, the outrageously funny, criminally underappreciated ABC sitcom that aired from 2012 to 2013. In another universe, Don’t Trust the B would probably have only been remembered as the show that launched the careers of Ritter and comedian Eric Andre. But thanks to streaming platforms like Hulu, Don’t Trust the B has developed a cult following since its cancellation, with websites like The Cut and Mashable offering gushing homages to the show’s rapid-fire comic patter, absurdist yet oddly relatable portrait of female friendship, and Ritter’s uninhibited performance as TV's most lovable female sociopath since Elaine from Seinfeld.

And it’s the clarity of Khan’s vision — and her insistence that the show, however weird, bawdy and offbeat it was, would one day find an audience — that is largely to thank for that.

“For so long on TV, women had to apologize or have to make excuses for their behavior or other people’s behavior."

After attending USC’s School of Cinema-Television and working for several years working as a writer and producer on other sitcoms (including beloved '90s proto-feminist cartoon Pepper Ann), Khan had the seedling for the idea for Don’t Trust the B — which, surprisingly, was rooted in the classic film Breakfast at Tiffany's. “I wondered what it would look like if [Holly Golightly, Breakfast's heroine ] lived today in the modern era," says Khan, "and you paired her with a roommate who was regular and paid bills and, like, went to Chipotle."

In certain respects, 2012 was the perfect time for Don’t Trust the B to enter the world: Bridesmaids had debuted the year before, breaking box office records and ushering in a wave of thinkpieces heralding the rise of women behaving badly. “Seeing how flawed, strong women could be the center of stories was coming up in the zeitgeist,” Khan says.

Prior to that, it was rare to see a female character as unabashedly flawed as Chloe on television. “For so long on TV, women had to apologize or have to make excuses for their behavior or other people’s behavior. They were usually the nagging wife or girlfriend,” Khan said. For her, writing Don’t Trust the B was about presenting that part of herself “that was all about being an unapologetic woman. Like, ‘I’m just gonna do what I want.’”

"[Chloe] doesn’t care about doing the right thing and doesn’t have that pull to society,” says Khan, because, well, it's funnier that way. She wrote Chloe as a character with “the narrowest thread to humanity” as a way to up the comedic stakes. Chloe's actions, says Khan, are loosely inspired by the kind of stuff you might bring up during “ridiculous fantasy drunken talk with your friends" — except Chloe actually does it.

"I would rather go out completely confident in what we were doing creatively rather than turn the show around to get the ratings up.”

Khan pitched the show to Fox, which liked the idea but passed; she then brought it to ABC, which at the time had a mandate to develop strong female voices. A casting director suggested Khan check out Ritter, based on her performance as doomed artist/ landlord Jane Margolis on prestige drama Breaking Bad. Khan was initially skeptical, but after the two met and discussed the character, she knew she was “perfect.”

But while critics had been happy to embrace Bridesmaids as a sign of a new era of unashamed women in comedy, many critics were confused by Don’t Trust the B when it initially premiered on ABC in 2012. The New York Times’ Jon Caramanica wrote that the show relied on shock value rather than genuine laughs and that “there’s less heart here than in the relationship that is at the core of ‘2 Broke Girls.’” The show also had to compete with the glut of other new entries to the “girls behaving badly” canon, from the critically venerated (Girls, The Mindy Project) to the, uh, less so (2 Broke Girls, Whitney, Are You There, Chelsea?) — all of which premiered within a few months of Don't Trust the B's debut.

The show's ratings were poor. But Khan says she never felt pressure to try to change the voice of Don’t Trust the B to appeal to network executives, nor did she ever consider doing so. “Internally, you kind of start to scramble. You start to think, ‘Should I sand the edges off? Should I make her more likable?,’” she says. “You have that thought for a second. But then you’re like, ‘No. I wouldn’t be happy with that.’"

When Don't Trust the B was canceled in 2013, it was not a surprise for Khan, who had written a season finale (Chloe’s quest to become head “foot ho” on a BET-esque dance show) with the expectation that it would also be the series finale. "I would rather go out completely confident in what we were doing creatively," says Khan, "rather than turn the show around to get the ratings up.”

After Don’t Trust the B was cancelled, Khan went through a mourning period, during which she says “I got drunk for like three months. Then I was like, ‘OK, I gotta do something else.’” She started working on two pilots, one of which was Fresh Off the Boat. At the time, Khan’s only guiding force for a new project was to do something completely different from Don’t Trust the B, and the adaptation of chef Eddie Huang’s memoir fit the bill: as the daughter of Iranian immigrants, “it spoke to another element of my personality and my life. I was like, ‘Oh, I know this story. I can tell these stories,’” she says.

When ABC first expressed interest in picking up Fresh, Khan was wary: after all, this was the network that had canceled her baby. “I told [network executives] I didn’t want to be like their Charlie Brown and Lucy with the football, like they keep taking it and moving it,” she said. “It was definitely a leap of faith for me.”

But the leap paid off: the show was widely acclaimed, with many heralding the show’s primarily Asian-American cast (the first on network TV since Margaret Cho’s 1994 sitcom All-American Girl) as a boon for representation. “I knew [Fresh Off The Boat] spoke to people in a different way [than Don't Trust the B did],” Khan said. “FOTB spoke to a lot of people in terms of how they saw themselves in it. Very few people saw themselves in Chloe or June or James Van der Beek. It’s kind of a different access point.”

It was also a question of cultural change. Since Fresh Off the Boat premiered in 2014 (it’s now in its fifth season), the explosive success of films like Crazy Rich Asians and Black Panther have definitively proven the hunger among mainstream audiences for realistic, emotional stories about people of color. This was especially exciting for Khan, who came up as a queer woman of color during a time when comedy was largely dominated by straight white male gatekeepers. “When you’re none of those things, and you’re running zero for three, your expectations are low, but also so is your fear,” she says. And this lack of fear has ultimately enabled her to take more creative risks: “I got a place at the table, and I’m excited to tell the stories I wanna tell, which are the stories I wanna see.”

This year, Khan will continue to tell these stories with her directorial debut, Always Be My Maybe, a Netflix romantic comedy starring Ali Wong and FOTB’s Randall Park. But even though Fresh Off the Boat has created a new world of storytelling opportunities for Khan, the weird little underappreciated sitcom that launched her career has always lingered in the back of her mind — particularly as Don't Trust the B has garnered an entirely new fan base who discovered the show on Hulu and Netflix.

Khan still regularly gets ideas for Don't Trust the B cold opens or plotlines (one would involve Chloe playing a role in every major scandal over the past seven or eight years, from LA Clippers owner Donald Sterling’s leaked racist comments to the release of Hillary Clinton’s emails). And she sees its influence on TV shows from Unbreakable Kimmy Schmidt to Killing Eve. “[Killing Eve’s Villanelle is] a queer bored millennial assassin sociopath,” Khan says. “And I was like, ‘That could be Chloe’s daughter. I get it.’”

And just as canceled-before-their-time shows like Deadwood and Arrested Development have been resuscitated, Khan says that’s not outside the realm of possibility for Don’t Trust the B. The show, she notes, could return in some form, like a handful of special episodes on a streaming platform or even a Christmas movie. “I know Dreama [Walker, who played June] would love it, and James [Van Der Beek, who played James Van Der Beek] would love it,” she says. “We still have a bunch of stories we want to tell.” (Ritter also said she’d be game for a DTTB revival during an appearance on a Comicapalooza panel last year.)

Today, Khan chalks up the failure of Don't Trust the B to poor timing: had streaming platforms, which tend to rely less on ratings systems and give shows more time to grow, been widely available at the time, she’s confident the show would have found its audience. And she's right. Her initial vision of a woman fucking up and refusing to apologize for it has found an audience — just a few years later than she initially expected.

“I was like, ‘I don’t know about the overnight Nielsen audience, but I know that people will find this show and love it and watch it.’ That was something I was telling everybody….so [its newfound success] does make me feel satisfied," she says. “I was always adamant that there’s an audience for this.”