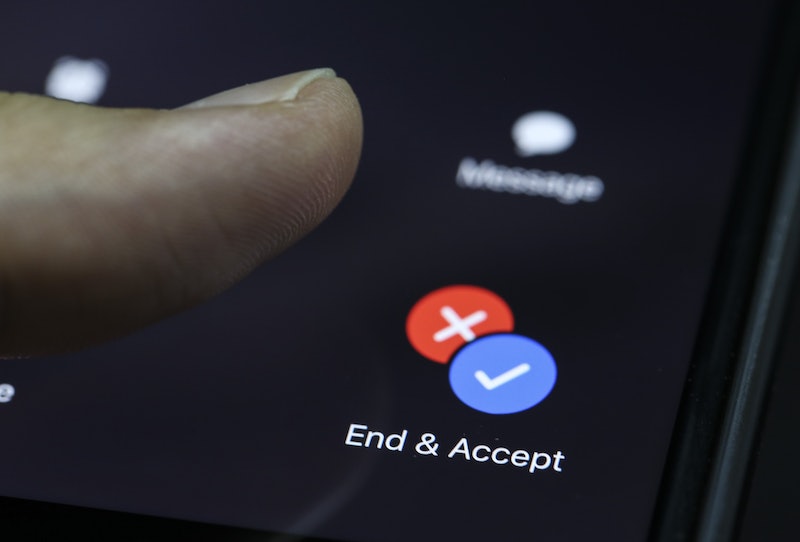 Your brain produces little bursts of dopamine — a happiness chemical — every time you get a text message notification or a “like” on social media, or whenever you leave your local coffee shop with a plain vegan biscuit in one hand and a vegan hot chocolate in the other (or maybe that last part’s just me). But because, apparently, we can't have nice things, "dopamine fasting" — which involves depriving yourself of life's joys so your brain chemistry can reach pre-smartphone notification levels — is gaining more awareness as a thing you can do. The idea is that depriving your brain of dopamine long enough will "reset" its levels, to rid yourself of smartphone-related desires. But, as Elemental reports, dopamine doesn’t really work like that.

Dopamine is a neurotransmitter, a class of chemical messengers that transmit information between your neurons, or brain cells. When you anticipate feeling good (like a text message you’ve been waiting for), your body releases dopamine, which is associated with that pleasant jolt that often accompanies your phone buzzing. While that sounds like a great thing, dopamine activates “reward pathways” that are also associated with habit-forming behaviors or even substance misuse. This has many people concerned about the rise of tech-related instant gratification and dopamine spikes, according to Harvard Medical School.

Elemental reports that various people are attributed with having coined the phrase or begun the trend, but that it's emerged in the last few years as a reaction to a culture that encourages "a constant barrage of junk food, porn, social media, recreational drugs, online shopping, and even professional success." The idea behind dopamine fasting, as described in a November 2019 New York Times article, is that with smartphones and social media all able to provide you with constant boosts of dopamine, abstaining from these and other stimuli would lessen your sensitivity to them, increasing your later reward. Since everyday life moments like looking at screens, listening to music, eating, and touching other people and pets all can produce dopamine spikes that make you happy, dopamine fasting involves refraining from… all of this.

“The idea is that voluntary sensory deprivation for a period of time can make sensory activation more intense and pleasurable when it is resumed,” associate professor of psychiatry at the UNC School of Medicine Dr. Donita Robinson tells Bustle. “This is only a 'new' idea when applied to social media and our modern lifestyles — ascetics, monks/nuns, etc. — have been on to this for thousands of years.” Yet dopamine fasting does not come with years of supervised training, and Dr. Gwenn A. Garden, chair of the department of neurology at the UNC School of Medicine, says there are no studies that she knows of on the subject.

It's also worth noting that smartphone notifications and other stimuli aren't going to provide an enormous, habit-forming dopamine rush, Dr. Robinson says, unlike what dopamine fasting advocates suggest. But dopamine fasting also doesn’t take into account everything that dopamine does for your body.

Because it’s associated with anticipating positive events and good feelings, dopamine helps you learn. Expecting a reward of some kind (like a nice text from your crush), your brain pumps out some dopamine. If that phone buzzing tends to be rewarded by those texts, your brain will learn to expect good things from your phone. But if your brain produces dopamine in anticipation of said text, and they consistently don’t arrive, your brain will learn not to expect good things from your phone buzzing. According to a 2016 study published in the journal Brain and Nerve, when the researchers blocked dopamine transmission with medical interference, they found that this kind of reinforcement learning could not occur.

According to Dr. Robinson, who studies addiction, the flip side of this learning is that “it may trigger the compulsion to check email, along with anxiety if you don’t respond.” She tells Bustle that this compulsion doesn’t necessarily translate into an addiction, though: “Whether it is an ‘addiction’ has to do with how much it impacts one’s quality of life and whether one is able to change behavior or not.”

Trying to address this with dopamine fasting can create a strong sense of isolation, Dr. Robinson says. If you are concerned about your relationship with your smartphone, Dr. Garden says that you should reach out to a mental health provider to address the core of what’s going on for you. Either way, the concept of dopamine fasting seems to be an oversimplified way to look at the way your brain works, and is not even possible for people whose health care, work, and mental health require activities involving personal joy and other people. If you value any of those things, dopamine fasting is probably not for you.

Dr. Gwenn A. Garden, MD, PhD, professor and chair of the department of neurology in the UNC School of Medicine

More like this
Dyson Is Dropping Futuristic, Air-Purifying Headphones
By Rachel Lapidos
Discord Might Be A Twitter Alternative — Here’s How To Use It
By Alexis Morillo
This AI Filter Shows How You’d Look In Different Time Periods
By Alexis Morillo
Here’s How To Find Your Spotify Wrapped
By Emma Lord and Emma Carey
Get Even More From Bustle — Sign Up For The Newsletter