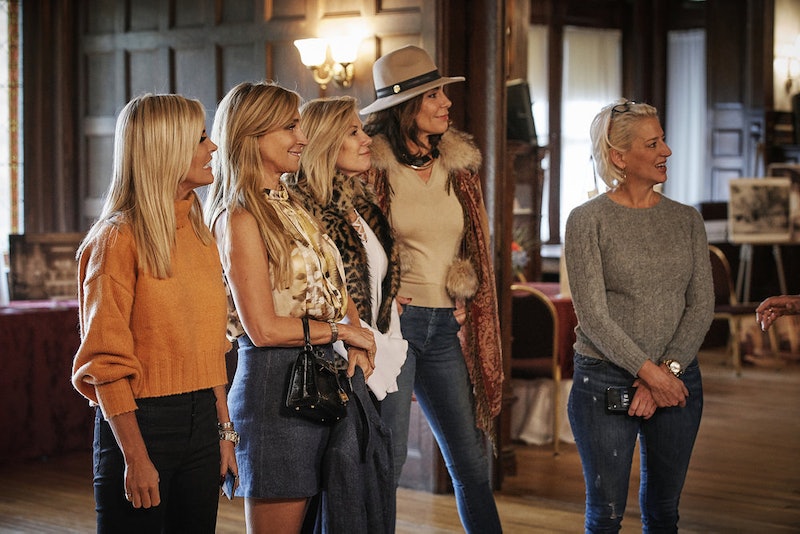 Growing up as a Bravo kid has to be a real trip, but what's it like when your mom is on Real Housewives Of New York and you're basically an adult? Hannah Lynch, Dorinda Medley's daughter, is just like her mother — smart, beautiful, and opinionated. The two are really close, and despite the fact that they, like every other mother/daughter pair, have their ups and downs, they definitely always have each other's backs.

Hannah is the daughter of Dorinda and her first husband, Scotsman Ralph Lynch, though not that much is known about her biological father. As Dorinda has explained on the show, Hannah was very fond of Dorinda's second husband, Richard Medley, and his passing from liver failure in 2011 hit both Dorinda and Hannah really, really hard. It drew them closer, too, and Hannah moved back in with her mom for a bit and took a break from school, as we saw on Dorinda's first seasons of Real Housewives Of New York. They got through it, and Hannah and Dorinda are tighter than ever.

"I love being with my mom. She's my best friend," Hannah told The Daily Dish in 2016. "We're so close that there is nothing I can't say to her. And we're best friends, so we really have a good time." They definitely seem like two peas in a pod — here's how Dorinda and Hannah seem a lot alike.

Dorinda is never one to rest on her laurels — she started her own cashmere line that was favored by the late Princesss Diana, and Hannah has a plan, too. She's an aspiring writer. She told The Daily Dish in 2016, "I'm trying to be a writer. I'm an essayist. It's very Nora Ephron-y, David Sedaris," she said. "But I've realized I've experienced a lot in my life, and I've grown up in an environment, especially with my mom, that I've seen a lot of things, I've experienced a lot of things, I have one hell of a voice. And so right now, that's what I'm working on. I'm working on writing short, humorous non-fiction." Can we place a pre-order yet?

Hannah told Bravo that the first thing she does in the morning is put on lipstick, which tracks to what it seems like Dorinda would do — both of these women like to look good and experiment with their clothing.

Richard was around for the formative years of Hannah's life, so it's not hard to see why she's still mourning him, all this time past. He seemed like a wonderful man, and Hannah and Dorinda keeping alive is memory is a lovely thing to see.

Hannah Forges Her Own Path

Far be it from anyone to tell Dorinda Medley what to do, and it seems like Hannah is cut from the same cloth as her mom. "Hannah does things in her own fashion, which is nice. She doesn't rush things," Dorinda told Andy Cohen on Watch What Happens Live.

You know that moment where you look in the mirror and you're all like, "I've turned into my mother?" (If not yet, maybe soon.) Hannah may already be experiencing that, because she and Dorinda are so much alike.

More like this
RHOP’s Robyn Dixon Explained Why Juan Paid For Another Woman's Hotel Room
By Brad Witter
Rachel Fuda Gave Birth Just Weeks Before 'RHONJ' Season 13
By Brad Witter
Danielle Cabral From 'RHONJ' Is No Stranger To Reality TV
By Brad Witter
Erika Jayne's Estranged Husband Tom Girardi Has Been Indicted On Fraud Charges
By Jake Viswanath
Get Even More From Bustle — Sign Up For The Newsletter
From hair trends to relationship advice, our daily newsletter has everything you need to sound like a person who’s on TikTok, even if you aren’t.