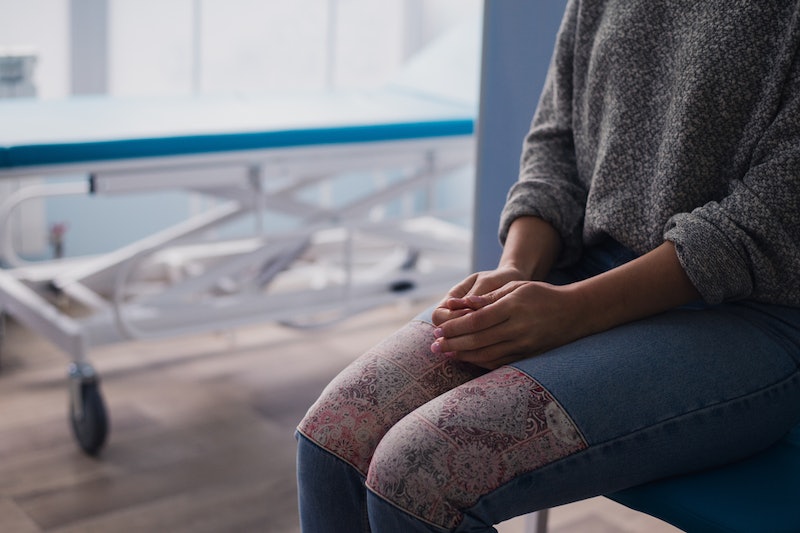 Over the past few years, things that used to be part of people’s daily lives have been replaced, or mitigated, by apps. Fittingly, it didn’t take developers long to look to our phones for a possible future alternative to birth control. A new observational study on the fertility tracking app, Dot, found that the app was over 90 percent effective at preventing pregnancy.

Pills, IUDs, and hormone-based contraceptives have long been effective contraception options, but some people have concerns about the long-term effects of using these birth control methods, even though these contraceptive options are extremely safe. Some people may not be able to use hormonal birth control, due to underlying health issues, or may prefer to use non-hormonal birth control. Fertility tracking apps like Dot use the rhythm method — where you track your cycle and monitor which days you're most fertile — to predict which days a user might be most likely to get pregnant. This method, also called fertility awareness, is 76 to 88 percent effective on average, according to Planned Parenthood.

Dot, which stands for “Dynamic Optimal Timing,” is a smartphone app that, as its website states, is an “easy-to-use fertility app that can help you plan or prevent pregnancy and predict future periods simply by entering start dates of your period." Over time, the app lets users know what days they are “low” fertility and what days they are “high” fertility based on their submissions and the app’s algorithm. On high fertility days, users are advised to either not have sex, or use some sort of additional form of contraception like condoms.

In the recent study, published in The European Journal of Contraception & Reproductive Health Care, 718 female participants tracked 13 of their respective menstrual cycles, gathering data from February 2017 to October 2018. All the participants, who were aged 18 to 39, were using the app to prevent pregnancy. Researchers assessed Dot’s effectiveness, calculating failure rates for the app based on scenarios where users used the app “perfectly” (used exactly as instructed), as well as more “typically” (AKA, not being 100 percent accurate with app usage and its directions). Pregnancies in the data were confirmed via participants’ self-administered pregnancy tests and self-reporting.

In an interview with MindBodyGreen, lead study author Victoria Jennings, the Director of the Institute for Reproductive Health at Georgetown University, said that the study represented one of the first times a fertility tracking app like Dot had its efficacy as a form of birth control tested in a similar scientific framework to other methods like the pill. "Our rigorous study design also allowed us to understand how women use the app and how they can be encouraged to use it correctly," she said.

Leslie Heyer, owner of Cycle Technologies and Jennings' daughter, told MindBodyGreen that the study indicates how, "In the real world, people are still able to use Dot correctly and protect themselves from pregnancy.” (The study disclosed that the study's authors "had no financial relationship to or received any income or royalties from Cycle Technologies, a company that is owned by a family member of the director of the institute.")

While the new research is promising, it doesn’t exactly mean it’s time to ditch all other forms of contraception or swap out your current methods. The study is one of the first of its kind, and, as always, more research in the space is needed to help make informed decisions. And as Stat points out, despite being described as a form of contraception, Dot hasn’t been evaluated and cleared by the Food and Drug Administration (FDA), though a similar app, called Natural Cycles, is FDA approved. Dot, like the Pill or IUDs, also can't prevent against sexually transmitted infections (STIs).

But fertility tracking apps like Dot, and their proposed efficacy, do raise interesting conversations regarding the future of birth control options. “Doctors and patients need to be talking about these apps,” Dr. Nathaniel DeNicola, an OB-GYN affiliated with George Washington University, told Stat. “For some women, this method may be perfectly acceptable. … But they need to know what they’re getting into.”