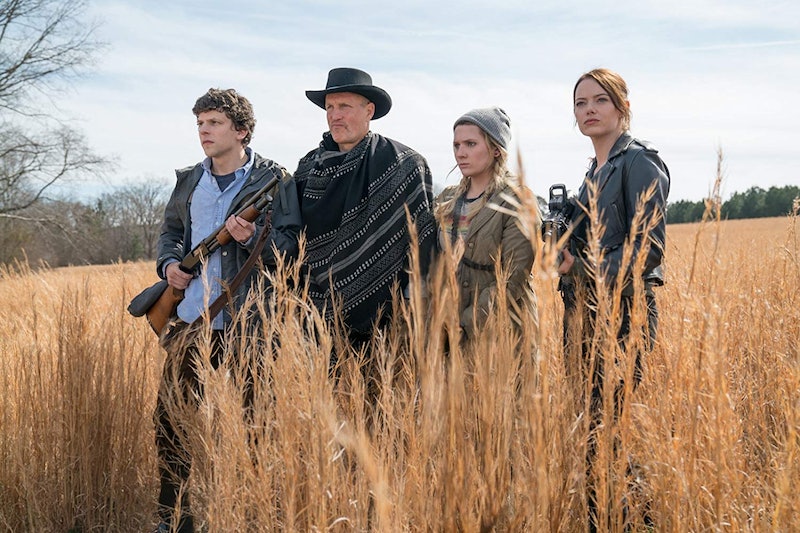 The gang's all back in Zombieland: Double Tap, which premieres on Oct. 18. When moviegoers meet them in the sequel, Columbus (Jesse Eisenberg), Tallahassee (Woody Harrelson), Wichita (Emma Stone), and Little Rock (Abigail Breslin) have become experienced zombie hunters who can navigate the post-apocalyptic world with confidence and ease and move together as one dysfunctional family. But while you would think they've mastered everything there is to know about survival, a few things have actually changed in the 10 years that have passed since Zombieland, and they've all got some new rules to learn.

"We find our heroes from the last movie 10 years later, as they're just moving into the White House," director Ruben Fleischer told Entertainment Weekly. (The first Zombieland came out in 2009, so real time has passed.) "Tallahassee has a saying, 'Go big, or go home.' They kind of took it to heart and went for kind of the biggest and best home they could find," the director continues.

In the trailer, Columbus, Tallahassee, Wichita, and Little Rock are having fun in their new home, but they're also starting to experience some growing pains. Little Rock, in particular, no longer wants to be seen as a "little girl," so she decides to leave the group, driving off with a boy named Berkeley (Avan Jogia). The remaining three then make it their mission to find her and bring her back home.

"It was crazy when we came back, because Woody [Harrelson] and Jesse [Eisenberg] both didn't know who I was," Abigail Breslin, who plays Little Rock, laughs in a Sony promotional video. But it isn't just Breslin's character who's changed over the years. "Zombies have evolved into different types of zombies," Fleischer explained to EW. "The one that’s causing the big threat are the T-800 zombies that are stronger, faster, harder to kill."

Aside from the undead, the pack also has to deal with other survivors whom Fleischer and the other members of his team call "doppelgängers." These new characters resemble the original four, but their personalities don't necessarily mesh well, and they become an added obstacle. Rosario Dawson joins the cast as Nevada, Zoey Deutch as Madison, Luke Wilson as Albuquerque, and Thomas Middleditch as Flagstaff.

So, why did it take 10 years for the Zombieland filmmakers to come up with the sequel? According to Fleischer, it definitely wasn't intentional. The director told reporters at a press event, per IGN, "Immediately after the success of the first film studio naturally wanted to do a sequel and we developed a script with Paul [Wernick] and Rhett [Reese], the original writers. But... it wasn't quite what I think everybody was excited to go make." He continued, "It's tough to make a sequel that stands up to the original, especially one that has, over the course of time, become a bit of a cult favorite."

But the film came together a decade later, and it seems that interest hasn't waned. Deadline's box office projections predict that Double Tap stands to make more than Zombieland during its opening weekend. The 2019 thriller-comedy is estimated to make somewhere between $25-$30 million in its first few days, whereas its predecessor made roughly $24.7 million.

Eisenberg told Inverse that there's much to look forward to in the new movie. "I think what [Double Tap] does well is they don’t compromise how emotional and sweet the characters can be, and how highbrow and obscure the humor can be. It’s a great mixture that allows it to be special, not only trying to appeal to all people."

It's been a 10-year wait for fans, but their patience may be rewarded.