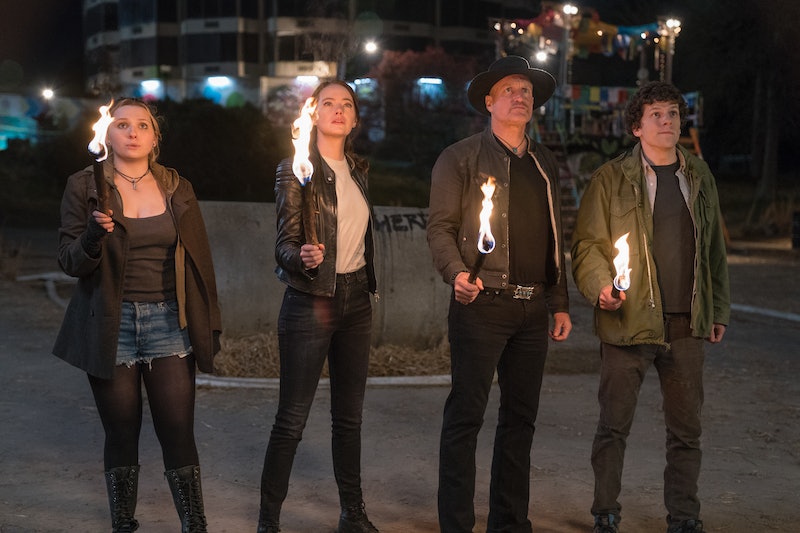 The zombie killing gang's all here in the trailer for Zombieland 2. Yes, Oscar winner Emma Stone, along with Academy Award nominees Abigail Breslin, Jesse Eisenberg, and Woody Harrelson have all returned for the the horror-comedy sequel, officially titled Zombieland Double Tap. In the past, these guys have come a long way. In fact, they've made it all the way to the White House.

The first trailer for Zombieland Double Tap starts with the foursome looking like badass assassins. They've learned some impressive new moves to take out the undead since 2009, and have fought their way to Washington, D.C. "I think I would have made a damn fine president," Harrelson's Tallahassee says as he sits in the Oval Office, which is no longer occupied by Donald Trump. "You would have brought a real dignity to the office," Wichita, played by Stone, jokes.

It seems as if some things really haven't changed. Ten years into the zombie apocalypse, these guys are still as witty as ever. And they're going to need a sense of humor to make it out of this thing alive. At this point, they've decided to live out the end of days as a dysfunctional family. One that plays Twister in the Oval Office and goes out zombie hunting together. But, when they decide to go on the move again, things get a little out of control.

First, they meet Madison, a pretty in pink survivor, played by Set It Up's Zoey Deutsch, who has been living in a Pinkberry freezer. Then Wichita's sister Little Rock (Breslin) disappears with a guy from Berkeley (Victorious' Avan Jogia), a hippie who most definitely is carrying weed. Like, a lot of weed. Basically, now, they're all wondering if the zombies are really their biggest threat. And honestly, it's a really toss up.

In an interview with Entertainment Weekly, Zombieland Double Tap director Ruben Fleischer talked about the foursome's historical new digs. “Tallahassee has a saying, ‘Go big, or go home,'" Fleischer said. "They kind of took it to heart and went for kind of the biggest and best home they could find.”

For the sequel, which was first teased at CinemaCon back in 2016, the digs aren't the only thing that got an upgrade. “In the 10 years since the first movie, zombies have evolved into different types of zombies,” Fleischer told EW. “The one that’s causing the big threat are the T-800 zombies, that are stronger, faster, harder to kill.”

Just like the original, though, this film is about more than zombies. "They have to face the growing pains of their own snarky, makeshift family," the film's official synopsis states. That includes the addition of a few new possible members including one played by Luke Wilson, who may or may not be Harrelson's doppelgänger.

“Actually, I’m going to leave to the audience who goes to the movie," Fleischer told EW. "I don’t want to spoil it too much. I’ll just say it’s perhaps one of my favorite parts of the whole film. You’re gonna have to go see the movie to see what’s going on."