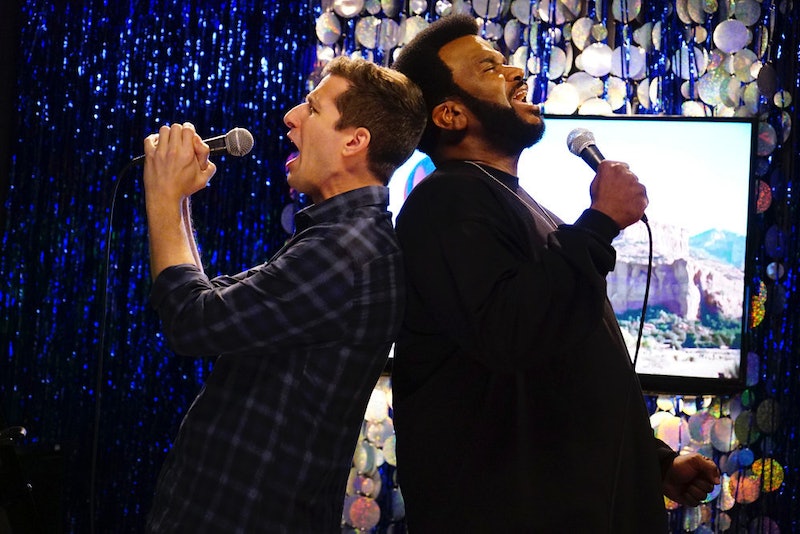 Spoilers ahead for Brooklyn Nine-Nine Season 6, Episode 5. Something incredible happens in this episode of Brooklyn Nine-Nine: Jake reunites with Doug Judy (Craig Robinson), and he doesn't screw the police detective over at the end. While the two have been friends on opposite sides of the law, it's hard to keep Jake and Doug Judy's relationship timeline straight. After all, the Pontiac Bandit only shows up about once a season, then vanishes by the time the credits roll.

This week, the bandit showed up to help Peralta chase down his sister, played wonderfully by Nicole Byer. And it was a great reminder of how well the two work together, much to Terry's chagrin.

Viewers aren't alone if they can't remember what Doug Judy does in which episode. As Jake says, "He returned the diamonds to me eventually. And it turned out that was the only way to get giggle pig off the streets! Wait, I may be confusing our adventures. What year was the cruise?" And it's no wonder the two keep running into each other: their chemistry is palpable and often leads to a song and dance number. They even formulate hard plans to go to Niagara Falls at one point, because neither of them have been. Although Judy comes in and out of Peralta's life like a spring breeze, it's never a dull moment when here's around. Here's a brief timeline of their tumultuous friendship.

Peralta and Judy first cross paths when Jake is trying to track down a car thief called the Pontiac Bandit, who has eluded him for years. However, Rosa's witness, Doug Judy, claims to know his location. And although the thief ends up being Judy (duh), the two still bond over their love of Fievel Goes West.

The Case of the Giggle Pig

PB&J are reunited when Peralta and Rosa arrest Judy. He cuts a deal to help the two detectives bring down Tito Ruiz and his local giggle pig production ring. Of course, Judy gets away, but tells Jake, aka Dante Thunderstone, that he'll never forget him.

Smooshing on the High Seas

Judy looks so happy here as a cruise entertainer named Horatio Velveteen who croons about his favorite thing: smooshing. He lures Jake and Amy onto the cruise because he thinks someone is out to get him: and he's right.

After a security truck full of prisoners crashes in Episode 11, one fugitive manages to escape recapture. It turns out to be George Gessilnick — Doug Judy's foster brother. Jake calls upon the Pontiac Bandit once more, promising to give him a clean record if he helps the NYPD catch Gessilnick. And while Judy ends up double-crossing Jake and Holt in order to gain his brother's trust, he proves himself in the end and even replaces Holt's beloved car, Gertie.

Jake is called in to negotiate a hostage situation, which is one of his dreams. Much to his surprise, the perpetrator turns out to be Doug Judy, who's been tasked with stealing some diamonds for a local kingpin. They send the former car jacker undercover and manage to arrest the bad guy in question. As usual, Judy gets away with the jewels, but feels bad for putting his friend in hot water and returns them to Jake, along with a video of him singing "What's Up?" by the 4 Non Blondes — their favorite karaoke song.

At the beginning of this episode, Judy has faked his own death in order to escape local arms dealer, Stefano Lucas. However, it looks like the Pontiac Bandit has a copycat, as someone else is using his techniques to steal cars. It ends up being his sister, Trudy Judy (Nicole Byer), who's dropped out of nursing school and has turned to a life of crime. So although a member of the Judy family screws Jake over, Doug stays on the straight and narrow this time around.

That said, it's only a matter of time before he pops up again, and who knows if he'll still be on the right path.