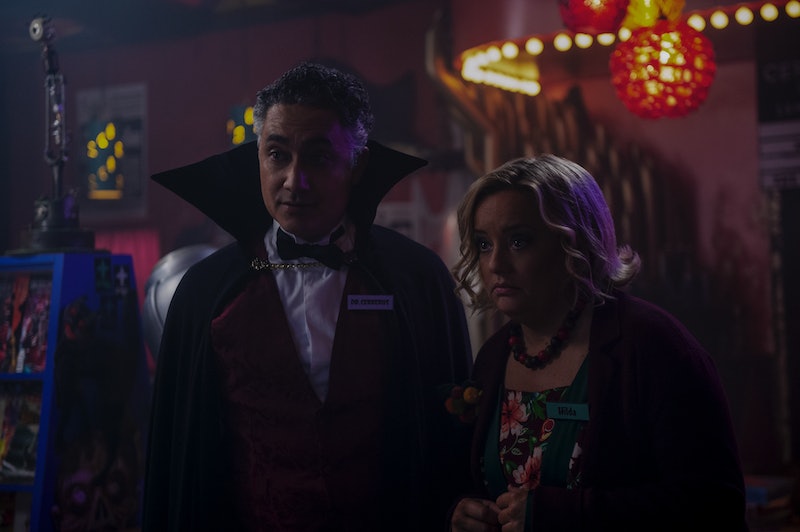 It's time to summon your coven. The Chilling Adventures of Sabrina returns for Part 2 on April 5, and Sabrina's journey is going to get even scarier and darker — especially with a potential new foe on the horizon. The quiet and quirky bookshop owner Dr. Cerberus isn't a comic book character, but he will certainly play a key role in the new episodes. And not just as Hilda's love interest.

According to NPR, the character was originally created by CAOS showrunner Roberto Aguirre-Sacasa for his 2010 play Dr. Cerberus. In the production, Dr. Cerberus, a vampire host of a late-night TV show called Nightmare Theater, was idolized by outcast teenager Franklin Robertson. Aguirre-Sacasa re-imagined Dr. Cereberus for the CAOS universe, and while it's not yet clear how similar he'll be to the original character, there's definitely something suspicious about him.

In case you forgot, Dr. Cerebrus (aka Dr. Cee) wanted to stay by Hilda’s side when she faced the Red Angel of Death, but she made him run away for protection. Thankfully, she made it out alive and the sweet couple walked back toward the Spellman home. Fans let out a collective "aww" when they shared their first kiss, but that quickly turned to a "wait, wait?" when Dr. Cee's eyes glowed red as he turned away from the house. Apparently there's no such thing as a normal love story for a Spellman — or anyone on this show, for that matter.

It was only a split-second moment, but it's not a good omen for the future of Hilda's relationship. Vampires don't typically have red eyes in horror TV shows and films, but there's a strong possibility that Dr. Cerberus is a demon or even a werewolf in disguise.

In Greek mythology, Cerberus is a dog with multiple heads that guards Satan's gates to prevent the dead from leaving the Underworld, per Britannica.com. The creature would also devour any living thing that tried to pass the threshold into Hades. So it wouldn't be surprising if CAOS Part 2 reveals that Dr. Cee is indeed the hound that protects hell, and will wreak havoc on anyone who dares to cross his path.

Bloody Disgusting also revealed that there will be an episode titled "Doctor Cerberus' House of Horror," which means he will definitely get some time to shine, for better or for worse. There's no word on what the episode will be about, but Hilda will likely be involved in some kind of way. Dr. Cee is missing from the Chilling Adventures of Sabrina Part 2 trailer, but perhaps that is by design to avoid any major spoilers about his true identity.

Will Dr. Cerberus pile onto all of the villains and enemies already after the Spellmans? Or will he decide to join their side in the ongoing battle against Madame Satan, Father Blackwood, and, um, the Lord of all Darkness himself? All will be revealed when the Chilling Adventures of Sabrina Part 2 arrives on Netflix April 5.

More like this
Nicola Coughlan Shared A Lady Whistledown Excerpt From ‘Bridgerton’ Season 3
By Grace Wehniainen, Alyssa Lapid and Sam Ramsden
The 'Andor' Timeline, Explained
By Gretchen Smail
Alicent's Green Dress In 'House Of The Dragon' May Be An Act Of War
By Kadin Burnett
Twitter Is Pouring Out Some Zhampagne As ‘Schitt’s Creek’ Leaves Netflix
By Brad Witter
Get Even More From Bustle — Sign Up For The Newsletter