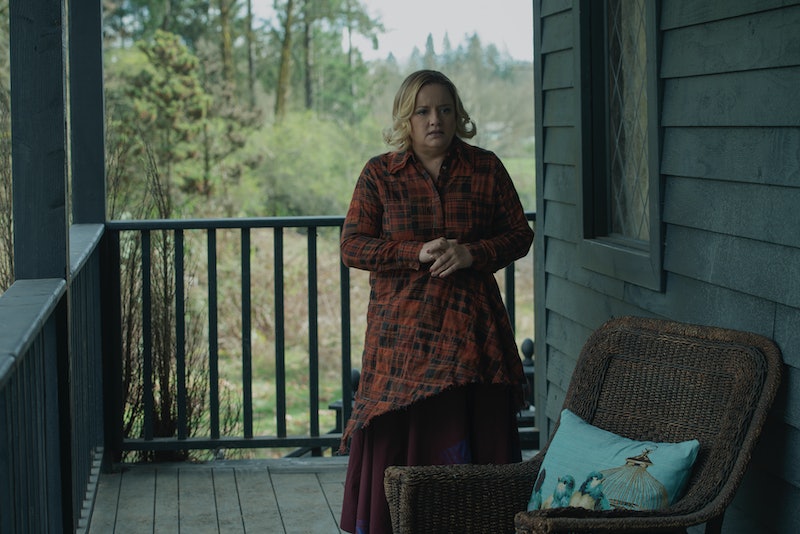 Spoilers ahead for Chilling Adventures of Sabrina Season 1. Apparently, all it takes is a quick flicker of the eyes to flip The Chilling Adventures of Sabrina on its head. Toward the end of Season 1, it seems Sabrina's aunt Hilda may have found happiness with her boss, Dr. Cee on Chilling Adventures Of Sabrina. She kisses him after the Greendale 13 attacks the town, and this interaction inspires her to move out of the room she's been sharing with her sister, Zelda, and into her own space. But after their kiss, Dr. Cerberus' eyes flash to a menacing yellow, setting up trouble for Hilda in Season 2.

Like Pop's Chock'lit Shoppe in Riverdale, Dr. Cerberus' Books and Spirits serves as the meeting place for the residents of Greendale in Chilling Adventures. It's a coffee shop, diner, and bookstore rolled into one. After Hilda is excommunicated from the Church of Night for having been a witness to Sabrina's mom having her baptized in a Catholic church, she decides to get a job at the shop. It gives Hilda a place to go outside the Spellman house and mortuary, and it presents her with a potential love interest in Alessandro Juliani's Dr. Cee.

Zelda calls Dr. Cerberus "the lunatic trash-peddler who dresses up like a vampire." But Hilda learns that he was Greendale's weatherman who parlayed that into a career as a horror host on TV before opening Cerberus Books. He dresses like a vampire and puts Hilda in a Bride Of Frankenstein costume to match the kitschy decor in his establishment. He seems innocent and sweet enough, but his eyes changing to a reptilian yellow is a major red flag that he's concealing his real identity.

NPR noted that Dr. Cerberus is a character Sabrina showrunner Roberto Aguirre-Sacasa originally created for his 2010 play, Dr. Cerberus. According to a Los Angeles Times review of the production, the play focuses on teenager Franklin and his fascination with Dr. Cerberus, "the cheesy vampire host of a local television station's late show, Nightmare Theatre." So the Chilling Adventures Of Sabrina and Riverdale creator reimagined this character for his Netflix show.

In Greek mythology, Cerberus is the three-headed dog that guards the underworld, so perhaps Dr. Cee is that hell dog. Or maybe he is really a vampire. Either way, Hilda needs to be putting her witchcraft to good use by figuring out the truth about Dr. Cee.

In her nightmare induced by sleep demon Batibat, Hilda goes on a date with Principal Hawthorne. Zelda taunts her sister by asking, "Does he know you're a virgin?" It may just be a bad dream, but it highlights how much Hilda wants a relationship with a man and how much she's struggled to find one. So she may have a bit of a blind spot when it comes to Dr. Cee because she's desperate for both a connection and a life beyond her sister's shadow. And while she certainly deserves happiness, Hilda will need to figure out the truth about Dr. Cee's true identity before she falls too hard for this potential demon.