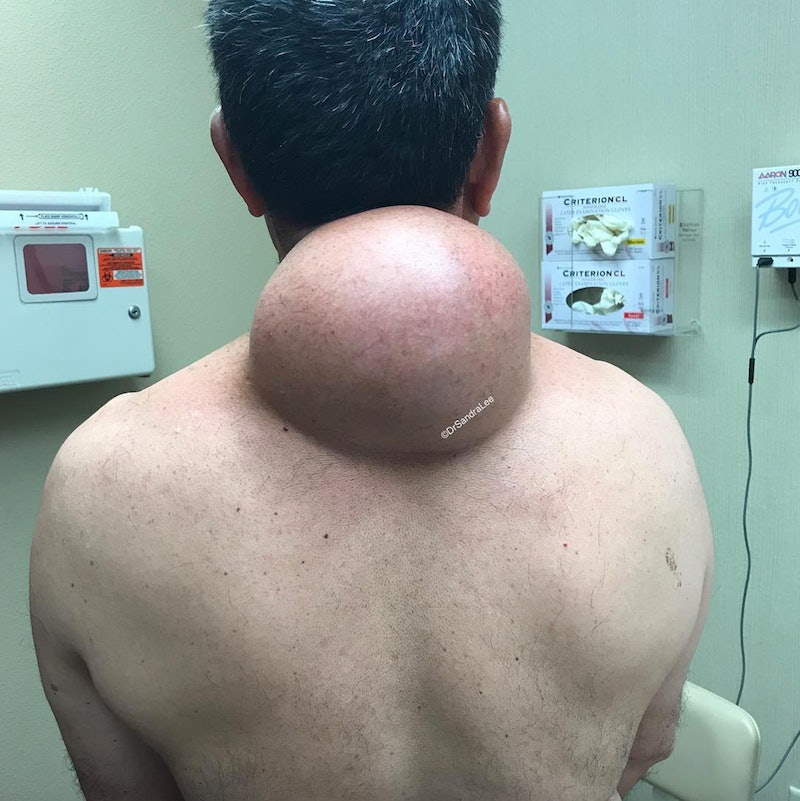 Pimple popping can be impactful. No, really. The infamous Dr. Pimple Popper popped a giant pimple for Hurricane Harvey relief, and the tactic is raising money for survivors.

Usually, Dr. Pimple Popper's videos stream on YouTube for free. But in the case of this grapefruit-sized pimple, she's presenting the clip ad-free and charging $0.99 to watch. A portion of the revenue will then be donated to two charities helping Houston recover, the American Red Cross and the St. Bernard Project.

Now, $0.99 may seem like chump change, but the video will surely rack up to a lot of money. After all, Dr. Pimple Popper has almost 3 million subscribers on her channel. First posted on Sept. 1, the video will be available for purchase until Sept. 8, in case you're interested in watching/donating.

The "pimple" in question is an extremely large growth on the back of an unfortunate man's neck — and when she says it's the size of a grapefruit, that's no exaggeration. Dr. Pimple Popper has actually been teasing this particularly gigantic popping for a while now (having first posted about it around a month ago), so the video has been quite hotly anticipated, making it the perfect video to charge charity money for.

It'll definitely rank right up there with some of her craziest pimple popping cases, that's for certain. And, if possible, it might just be even more impressive than her recent "unicorn" cyst triumph.

As Dr. Pimple Popper herself put it:

One of the many things I have learned from social media is how POWERFUL it can be. What is more amazing to me is how much GOOD it can do. It gives me HOPE and makes me PROUD to see so many people taking action (both big and small) to help those affected by #HurricaneHarvey. Andddd now it is OUR turn, popaholics!!

She also graciously adds links to the aforementioned Red Cross and St. Bernard Project in the video description for people who want to donate, but don't want to watch her extract the uncomfortably large growth — which includes squeamish folks like me.