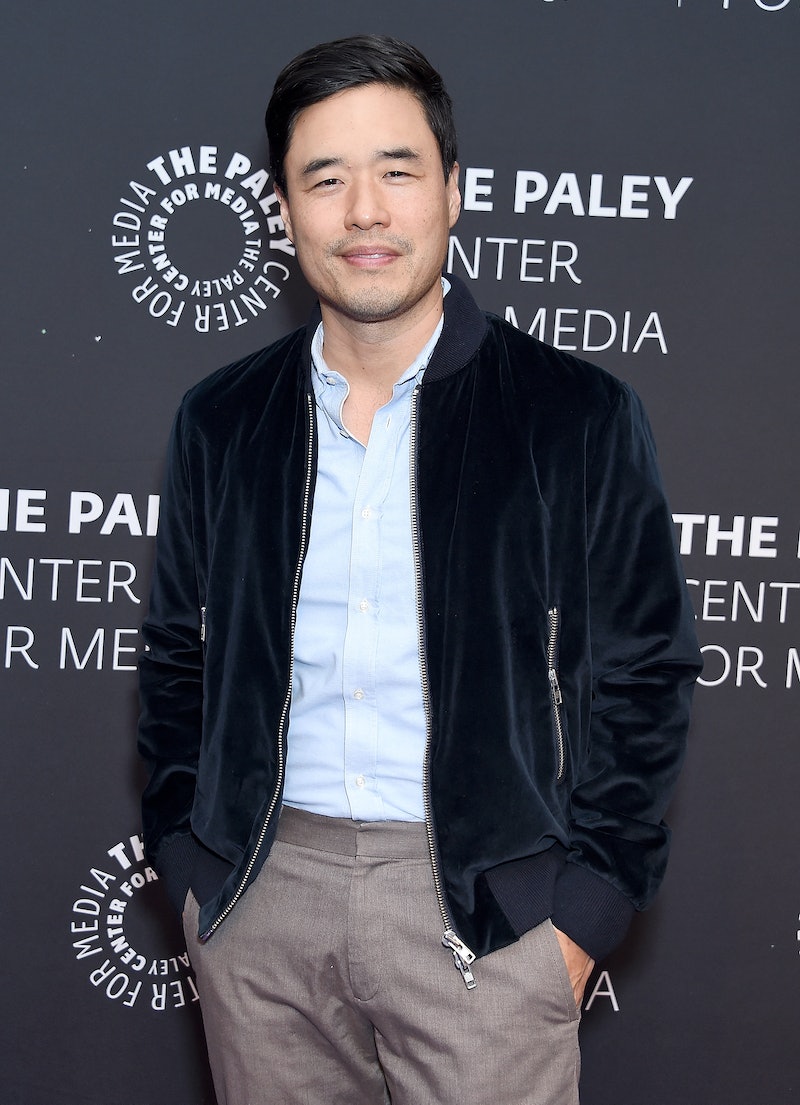 Spoilers ahead. One of the most intriguing characters in the new Aquaman movie (out Dec. 21) is onscreen for less than five minutes. Dr. Stephen Shin, played by Randall Park, is presented as a conspiracy theorist, and while he has very few lines, it's clear that he must be someone from the comics. So, what is Stephen Shin like in the DC Aquaman comics? He doesn't have that long a history, but he has more going on than we see in this first Aquaman movie.

First, the movie: In Aquaman, Shin appears when Arthur Curry (Jason Momoa) and his dad, Tom (Temuera Morrison), are watching the news at a bar. During a segment about Aquaman, Shin is consulted as a conspiracy theorist, who believes that Atlantis is a real place with a connection to Aquaman. (Of course, Shin is right about all of this.) Then, Shin appears again during a mid-credits scene in which he encounters the villain Black Manta (Yahya Abdul-Mateen II), who had been defeated earlier in the movie. Shin takes in an injured Manta, who tells him the truth about Atlantis, including that it's where is armor is from and that he is seeking revenge on Aquaman. If a sequel happens, it seems likely that it'll involve these two teaming up.

That said, there won't be a ton for the movie to go off of from the comics when it comes to Shin. (Manta is another story. There's a lot there.) Shin first appeared in Aquaman Vol. 7 #2 in 2011, which is part of the New 52, the DC series in which characters got new, reimagined #1 issues. According to Comic Vine, he was a friend of Tom and Arthur when Arthur was young, and he helped the kid develop his powers. Shin is a marine biologist, so naturally he can assist with things like superhuman swimming and communicating with ocean life.

While things were fine between the Currys and Shin for a while, eventually he became more and more obsessed with finding out the location of Atlantis and threatened to kill Aquaman for not revealing it. According to Bounding Into Comics, Shin also helped Mera and Aquaman defeat the Trench. While Shin isn't involved in this in the movie, Mera and Aquaman are shown confronting the Trench together.

Clearly, a major difference already exists between the comics and the movie when it comes to Dr. Shin, because the Shin in the movie has not known Arthur his entire life and did not help train him. He also seems to have less concrete information about the existence of Atlantis than the comics version does. (Movie Shin's dwelling basically looks like this.)

Shin was almost not even part of the movie. As reported by ScreenCrush in April, Park joined the cast during reshoots, which director James Wan posted about on social media. This hinted at the fact that Park wouldn't be in the movie very much. At the time ScreenCrush's Emma Stefansky wrote, "Since Park is on set for 'pickups,' could this possibly mean that he’s filming some kind of post-credits or mid-credits scene foreshadowing his future obsession with the lost underwater city?" As we now know, that was pretty much spot-on.

An Aquaman sequel has not yet been confirmed, but when and if it does happen, expect to see more of Park and his version of Dr. Stephen Shin.