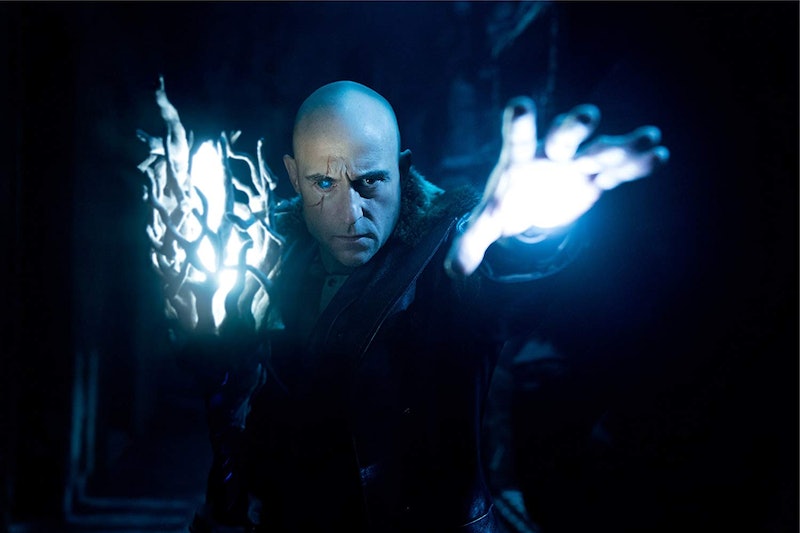 Dr. Thaddeus Sivana (Mark Strong) is the supervillain in the DC Extended Universe's latest origin story movie Shazam!, which hits theaters April 5. It tells the story of 14-year-old foster kid Billy Batson (Asher Angel) who, one day on the subway, gets chosen by a wizard who gives him transformative magical powers that turns him into superhero Shazam (Zachary Levi). But the movie's Dr. Sivana is practically the exact opposite of the one comic book fans know from the original '40s DC storyline. Sure, they have the same bald head, but this Sivana is not so much a small, frail-looking mad scientist in spectacles that he use to be. The movie's take is a jacked, rogue, magic-obsessed relic hunter with a cool, electric blue eyeball.

According to the Shazam! Fandom Database, Sivana in the '40s comics was the arch rival of Captain Marvel — the original name of Shazam before Marvel Comics licensed the name "Captain Marvel" in the '60s. (Note: Shazam exists in the DC Universe, and is totally unrelated to Marvel's Captain Marvel.) Sivana was one of the richest men in Fawcett City and built his own weapons to try and defeat Captain Marvel. This is because the original Sivana, much like Superman's own bald bad guy Lex Luthor, has no physical powers. He's a man of science who thinks his clever tactics, calculated moves, and inventions are superior to Shazam's magic.

As listed in the database, his abilities include: business management (he runs a business, which Captain Marvel/Shazam ultimately ran to the ground), genius-level intellect, political science, science, electrical engineering, mechanical engineering, and robotic engineering. But as you can see in one of the movie's latest teasers, the movie's Sivana has powers to match Shazam's. He has superhuman strength like his enemy, and some blue beams that shoot from his hands.

But this version of the villain isn't baseless. Den of Geek explains that the new Thaddeus Sivana takes after comic book writers Geoff Johns and Gary Frank’s 2012 reimagining of the character.

The DC Fandom Database says that this relaunched version of the villain was a man of science, until it failed him in his attempt to save his family in an unspecified plight. And so he turned to magic, and searched for the legendary Black Adam — a slave from a fictional country called Kahndaq who walked into a cell door and, like young Billy Batson (Shazam's mortal human form), found himself in the Rock of Eternity and gained his powers. And when Sivana found Adam's tomb, his right eye was struck by a bolt of lightning, giving him his capability to see magical auras or energy surrounding him.

“He gets to fly, he can create electric fields in his hands, and fire electricity,” Strong said on set, per Den of Geek. “He’s much more robust and much more powerful.”

In Shazam!, Sivana's goal is to obtain Batson's powers. “[Sivana] can’t understand that the Wizard has chosen this boy as his champion,” Strong continued. “The wizard has chosen a boy, and he realizes that obviously that boy manifests himself into the Zachary [Levi] version of Shazam. To him it’s a source of total incomprehension why this boy should have been chosen over him.”

And while the actor reveals his character's main motivation, not much else has been revealed regarding his purpose and why he wants these magical powers so badly. You'll just have to hit the theaters to find out.