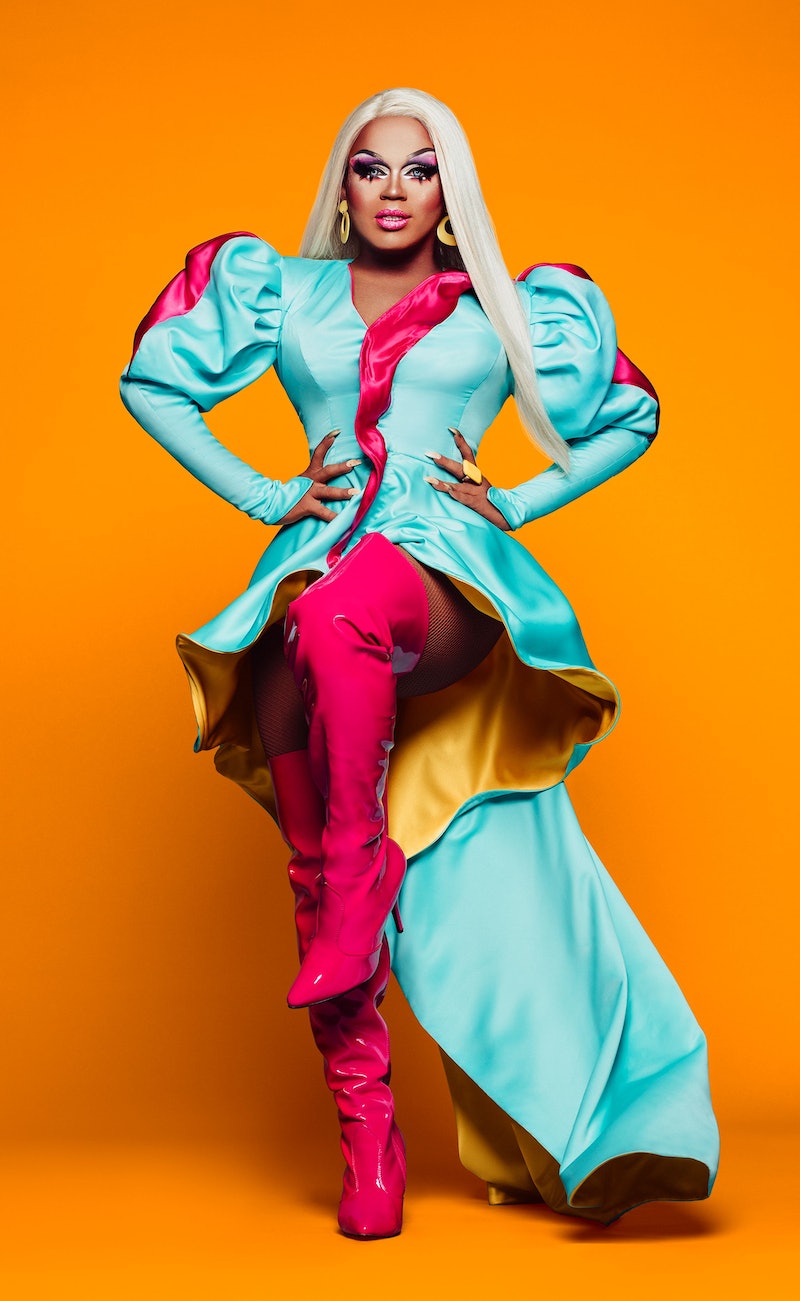 She may have not made it to the final three, but Mercedes Iman Diamond is leaving Drag Race a winner. She tells Bustle that appearing on the show was a dream come true — not only because she applied four times before making the cut, but because it allowed her to accomplish one crucial goal. "One thing that I did on the show that I really wanted to do was help one child that's out there that is Muslim," she says. "And let them know that it's OK to be gay and OK to be Muslim, and follow your heart."

Mercedes had a watershed moment on the show when a few of the other queens inquired about her religion. At first, she brushed it off and changed the subject because she didn't feel comfortable talking about it. "The reason why, is it's really hard, especially in this country where people are like when something happens that involves a Muslim, it's like, 'Oh they're a terrorist' and I don't want people to feel like every Muslim is a terrorist," she said on the show. But after giving it some thought, she had a change of heart. She later apologized to her sisters for walking away from the conversation and proudly discussed her faith.

Afterward, Yvie Oddly thanked her for speaking up. "I just want you to speak up about it because you're the strongest representation we get then," she said. "If you close your mouth and walk away then you're robbing a bunch of children of the experience of knowing about what it means to be Muslim."

Looking back, Mercedes says talking about being Muslim was the best thing she did with her time on the show, and she's received a considerable amount of comments and messages thanking her for the representation.

"I am 100 percent proud of myself about opening up because if I didn't — just imagine — me imagining, if I didn't talk about it, how many Muslim gay boys out there are scared for their life," she says. "It was a weight lifted off my shoulders to know, like getting now all these messages from 13, 14, 15-year-old kids that say, 'Thank you so much for speaking for us. Like, thank you so much. Without you... you help us.' And I'm so grateful for the opportunity, the chance."

She truly believes she was given the amount of time on the show she was meant to receive — no more, no less. And she did with it what she was supposed to do. "Everything happens for a reason," she says. "And when your time's up, your time's up. I don't regret it. The reason why I didn't cry when I got eliminated because my time was up. I made it to RuPaul's book. Out of how many thousand, I am one of the 140 girls that's on the book. And to be the first Muslim queen? Honey. I can't ask for anything better than that."

Sharing her story on national television was just the beginning for Mercedes. Now, she has the platform to continue she-vangelizing it across the globe. She tells Bustle she's going to be touring the entire year, and she'll be doing so as the proud, gay, Muslim queen she is.

More like this
There’s A Brand New Drag Race Spin-Off & It’s Dropping Very Soon
By Sam Ramsden
The 'Bachelor In Paradise' Schedule Shifts To 4 Hours Every Week After The Season 8 Premiere
By Brad Witter
Are Brandon & Serene Still Together After 'Bachelor In Paradise'?
By Kadin Burnett
‘RHOSLC’ Star Jen Shah’s Arrest & Legal Drama, Explained
By Brad Witter and Jake Viswanath
Get Even More From Bustle — Sign Up For The Newsletter