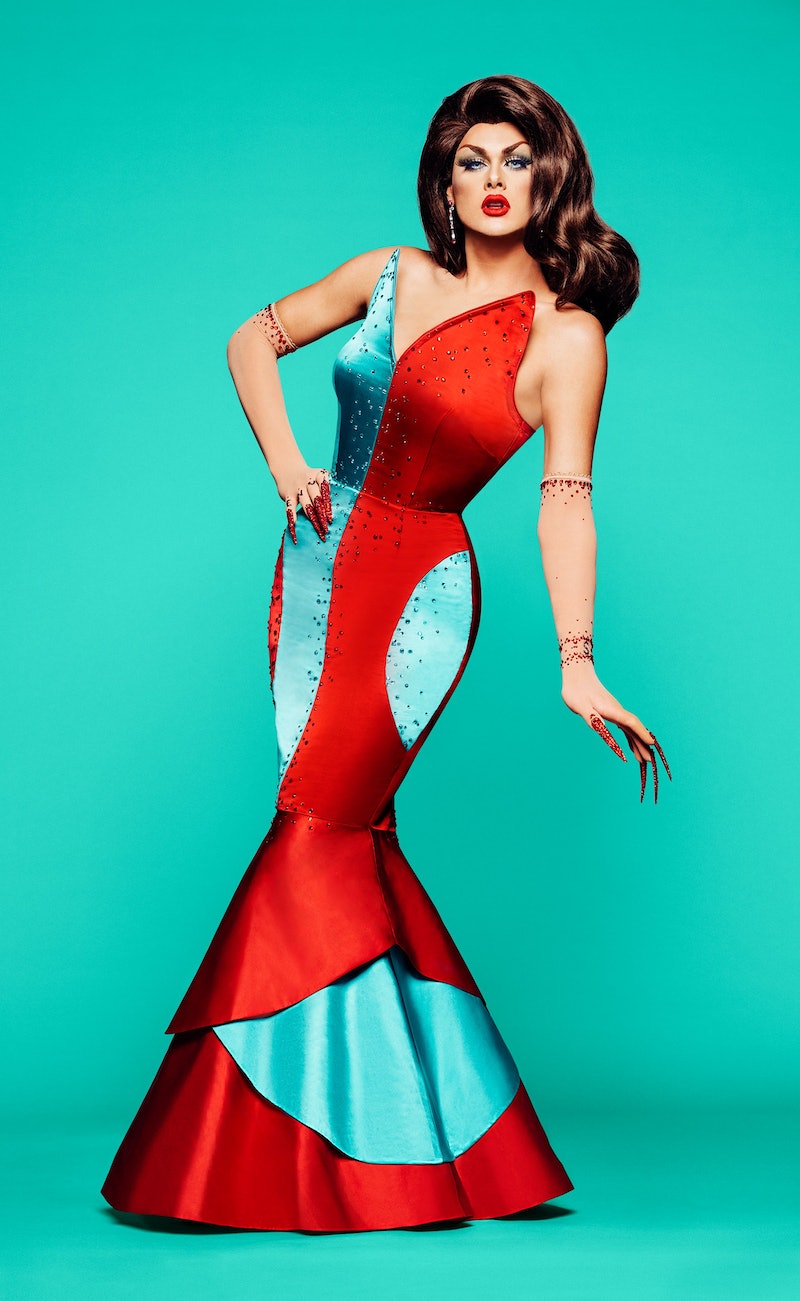 Her attempt at dancing could be likened to a newborn fawn learning to walk for the first time, but Drag Race queen Scarlet Envy doesn't mind. Yes, she got a lot of slack from her Season 11 sisters for not being the most graceful of the bunch — especially when it came to learning new choreography — but she didn't let that get to her. In fact, Scarlet tells Bustle, she was laughing right along with them.

"I just laugh it off, girl," she says. "I mean, like, what else are you gonna do with those personalities in that iconic werkroom? You gotta laugh it off. Maybe it's the New York showing, but you gotta have thick skin to [be] a drag queen — [and especially if you live in] the most difficult city in the world with the best drag in the world."

Scarlet is one of the many queens to enter the werkroom from the New York City drag scene, and she says she can remember exactly where she was when she got the call to be on Season 11. "I was in Brooklyn on a rooftop of a friend's house looking across the East River at the city and it was sunset," she says. "It was so picturesque and so beautiful. And I definitely fell to the ground." In retrospect, that isn't much of a surprise, but Scarlet's tendency to fall is made up for by her acting expertise — a skill many of her sisters are still mastering. Scarlet can thank her drama experience for her one maxi-challenge win.

"The opportunity that Drag Race provides in that world of acting is so incredible and I'm really excited to like, open some of those doors and really pursue acting on stage and on screen," she says. "I might not be a dancer, but I'm certainly a performer. I'll give you a show."

Which is why she was just as shocked as much of the Drag Race fandom was when Ru told her to sashay away, especially against Ra'ja O'Hara, who has been in the bottom three times. "I don’t even like Scarlet Envy," wrote one Drag Race fan on Twitter. "But sending her home over Rajah... was a CHOICE."

"You know we got to respect to the decision," Scarlet says. "I signed up to be judged, I signed up to have my fate in the hands of someone else, and that's what the game is, you know. Just because, you know, I accept it doesn't mean I agree with it."

Besides, Scarlet says, every performer has a weak point, and she's not trying to hide hers. "We're never the finished product. I think that just performers specifically have this need to be polished and finished ... but there's no shame in admitting that maybe that's not the case all the time," she says. "And I hope maybe never to be actually. We are allowed to be a work in progress, and how lucky I am to have an audience watch me going through that with myself?"

So go ahead and laugh at Scarlet's dancing. She'll beat you to the punch — and then steal the show another way.

More like this
'The Great British Sewing Bee' Semi-Final Is Extra Special For This Reason
By El Hunt
12 Crucial Casa Amor Predictions About Who Will – & Won’t – Stay Loyal, Babe
By Victoria Sanusi
Natalia Dyer Opened Up About Steve & Nancy’s “Lovely” ‘Stranger Things’ 4 Dynamic
By Grace Wehniainen
The 'Stranger Things' Writers Revealed 2 Tragic Unscripted Finale Moments
By Grace Wehniainen
Get Even More From Bustle — Sign Up For The Newsletter