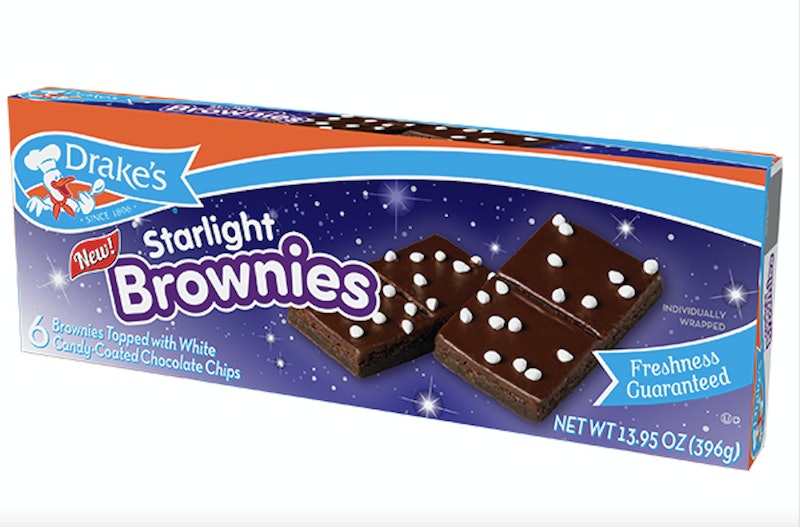 As a pastry and dessert enthusiast, I would categorize most confections as ~out of this world~. Even if we're just talking about a regular ol' donut. However, now there's a brownie that's taking this other-worldly, cosmic compliment literally. Drake's Starlight Brownies brings the solar system down to Earth, and makes it way more delicious.

Think of it this way: Now you don't have to go outside to stargaze. Just stare into the face of a Drake's Starlight Brownie. You don't need a fancy telescope to see clearly that this chocolate confection is full of flavor. This comfort food classic is a perfect, decadent snack or dessert. What makes them other-worldly is the candy-coated white chocolate chips decorating the brownie with constellations. It's clear to see that my whole world will revolve around a box of these brownies.

Earthlings can enjoy Drake's Starlight Brownies by the box. Each brownie comes individually wrapped and each box is packed with six brownies. That should last you to the moon and back, if my calculations are correct. You can purchase a box of your new favorite snack online — a box of six retails for $2.99 on Amazon. But in case you were planning on doing a grocery run anyways, you can find Drake's products "available in supermarkets, supercenters, value retailers and convenience stores throughout the Eastern U.S.," according to an official press release. Find a location that sells these treats near you through a product locator on the Drake's Cake official website.

Now that we're all officially in the mood for travel through time, space and brownies, let's hop in our time machines and visit yesteryear. If you grew up in the Eastern U.S., you're familiar with the the Drake's Cake franchise. Delis and supermarkets were outfitted with a variety of classic Drake's cakes. Perhaps your mom slipped Yodels into your lunch, and tucked Ring Dings next to your peanut butter and jelly sandwich. These are not only classic treats, but also nostalgic. And now we are ~treated~ to a new sure-to-be-future classic, the Starlight Brownie.

Drake's is famous for its packaged Coffee Cakes, Fruit Pies, Devil Dogs, and Yankee Doodles. The Starlight Brownie is a first for Drake's delicious line up. And its existence is all thanks to the fans. "Drake's fans told us they would love to see a brownie from their favorite brand," Chip Stenberg, Drake's associate brand manager, said in an official press release. "We're happy to delight them with new Starlight Brownies and an out-of-this-world flavor experience."

If you don't have Drake's available in your area, can't hop on the next rocket ship to the east coast, and can't wait for overnight shipping, you can attempt a DIY version using a brownie recipe for one. I cannot promise that it will taste the same as a Drake's treat, but it's a brownie, so you can expect it to at least rock your world.

Prepare to thank your lucky stars for the existence of the Starlight Brownie. Their chocolatey arrival to Planet Earth is more than welcomed. And if you need me, I will be candy coated chocolate chip gazing in my kitchen.