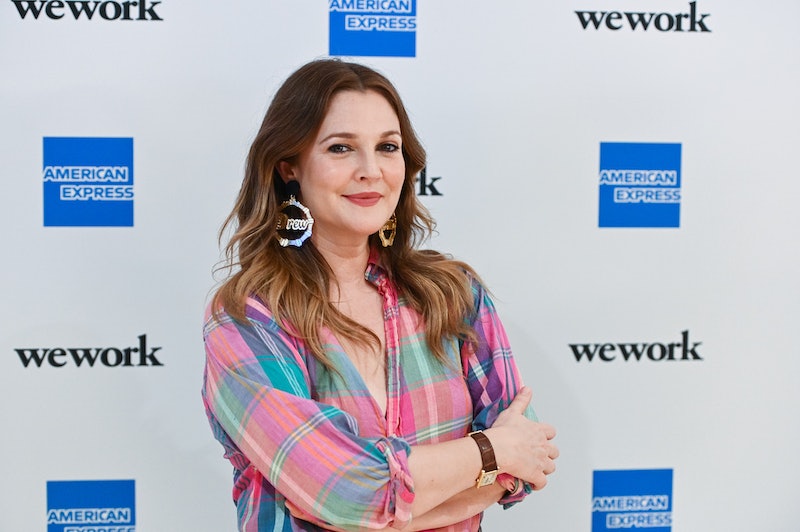 In Bustle’s Q&A series 28, successful women describe exactly what their lives looked like when they were 28 — what they wore, where they worked, what stressed them out most, and what, if anything, they would do differently. Actor, producer, and entrepreneur Drew Barrymore tells Bustle that life can be pretty confusing at 28 — even for superstars.

It's hard not to feel like you know Drew Barrymore. I mean, you definitely don't know Drew Barrymore — you've just spent three decades watching her iconic movies, like E.T., Never Been Kissed, and Grey Gardens; buying items from her beauty, women's fashion, and kid's interior design lines; and following her delightfully intimate Instagram account, where she shares freely on topics from skincare to really stressful days. But Barrymore approaches each of these endeavors with so much positivity and open-hearted honesty that it's tough not to feel like she's an old friend — a feeling so pervasive that it's been parodied on the TV show Billy on the Street, with a game called "Would Drew Barrymore Like That?".

But Barrymore's fans don't just feel close to her because of her long career. We're drawn in because she gets real about the ups and downs of her life — speaking frankly on topics from her unstable family situation during her childhood, to her process as an actor today, pulling no punches while also finding the good in every situation. I mean, who wouldn't want a friend like that?

So it's no surprise that when Bustle asked Barrymore — currently working as an American Express Business Platinum brand ambassador — about her 28th year, she got real. Even though her life at 28 looked pretty frickin' enviable — Charlie's Angels: Full Throttle, a film she starred in and also produced, was about to premiere — she admits that all that success came with a lot of stress, too. "I had no ability to compartmentalize," Barrymore tells Bustle. "The stakes felt very high."

How were you feeling when you turned 28?

It was the best time ever. I was going to music festivals all around the country, driving an RV to anywhere we wanted to go. We were finishing Charlie's Angels: Full Throttle and about to premiere it. We were feeling free and baller, all at the same time. It was a great year!!

Where were you working when you were 28?

I was producing for Flower Films, the first company I founded. We had made Never Been Kissed and we had a legitimate franchise with Charlie's Angels. Shortly thereafter, we were about to figure out how to make 50 First Dates with Adam Sandler and his gang. We wanted to make fun movies and we were learning how to grow this project as a business, getting to do just that.

A private plane to Vegas to see the Rolling Stones, with the two Charlie's Angels [Cameron Diaz and Lucy Liu] and all our friends.

Where did you live?

I was living between Los Angeles and New York, and I was also going wherever the work and the wind would take me.

What do you think your biggest obstacle was when you were 28?

Probably myself. I was extremely passionate about everything, as if I had no ability to compartmentalize what should get 50% or 40% — everything was 100%.

I had a lot of responsibilities at work as a business owner and producer. There were major studios relying on me to come through for them and keep my promise. The stakes felt very high.

Also, finding new writers, and new materials, and screenplays in order to generate more films to be made by our company. It was a very stressful time, but also very prolific.

What would your 28-year-old self say about what you’re doing right now?

You are so much better! Calmer, wiser, making better choices. You take more time for self care and have a better life balance. And you’re a businesswoman — which is unbelievable! A successful, powerful and thriving businesswoman, and I can’t wait to see what her next adventure is.

Describe your favorite outfit and beauty look when from when you were 28.

It was comparable to an Ibiza lifestyle: I’d go out late, come home in the early morning hours. Which is ironic, because my life is the exact opposite of that now. I go to sleep early and wake up early.

What was one moment of your career when you knew you'd made it?

I still don’t feel that way, but that’s OK, because that's what keeps me going and “humble.”

What's your biggest goal now? And how has that changed since you were 28?

To be a good mother. And when I was 28, I never knew I would have such a privilege.

More like this
At 28, Sharon Horgan Was Hoping To See Damon Albarn At The Pub
By Samantha Rollins
10 Ways To Be More Empathetic To Your Partner
By Raven Ishak and Lexi Inks
Think Your Partner Is Cheating? These Tarot Cards May Confirm Your Suspicions
By Kristine Fellizar
The 19 Best Tweets & Memes About Bisexual Awareness Week
By Lexi Inks
Get Even More From Bustle — Sign Up For The Newsletter