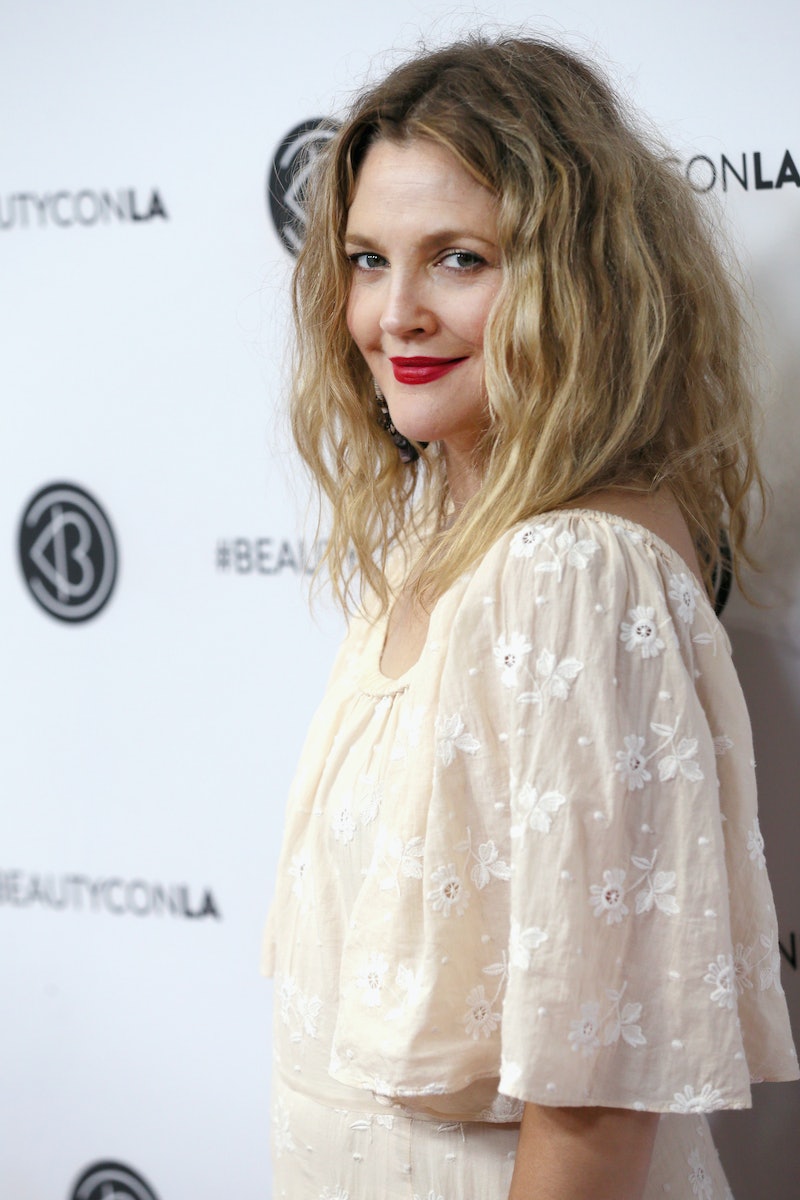 Fair warning: This whole thing is probably going to make your brain hurt a little bit. It's wild, winding, and down-right bizarre. One week after the story first surfaced, EgyptAir finally explained that viral Drew Barrymore interview, AP News reported on Tuesday. OK, well, they kind of explained the interview by essentially pointing a finger elsewhere. (Bustle reached out to EgyptAir for comment, but did not receive an immediate response.)

According to AP News, the EgyptAir airline released a statement, claiming that the Al-Ahram advertising agency was, and is, "totally responsible" for editing the content of the airline's in-flight magazine, Horus. (Previously, the airline tweeted that they stood by the story, writing on Oct. 2 that the article was "a professional magazine interview conducted by Dr. Aida Tekla Former president of the HFPA.")

Al-Ahram's latest statement tells it a little differently, though. AP News reported that the ad agency claims the viral Drew Barrymore interview "is a product of the editor’s creativity." Who is the editor, exactly? It's unclear. Regardless, the agency said, "We apologize for any misunderstanding that might be interpreted as an offence to the great artist (Barrymore)."

"As is generally accepted, the lead is not part of the text of the article. It is a product of the editor’s creativity produced on the condition that it contains no information that is contrary to the truth."

While the exact editor may remain unknown, the person who supposedly conducted the Barrymore interview — Dr. Aida Takla-O’Reilly — has been known since day one. At first, it kind of seemed as if the entire thing was completely fabricated. The quotes didn't seem real, nor did they really even make much sense.

However, Takla-O'Reilly has maintained that the interview with Barrymore did, in fact, occur "in New York [and] is genuine &far from fake," according to one of several tweets, seemingly written by her. "As far as Drew we interviewed her several times I saw her grow up before my eyes she is charming and talented," she continued.

Takla-O'Reilly then insinuated that Horus was ultimately responsible for what ended up in print, as the publication was "authorized to edit the final version of the interviews, according to adjustments required by the magazines in regards to size of the article without altering the core of the content," she tweeted on Oct. 3.

Al-Ahram's statement confirmed that Takla-O'Reilly wasn't at fault for the particularly defamatory opening paragraph of the piece, as per ABC News, but essentially chalks everything up to a major translation error. Apparently, the original text was translated from English to Arabic, then back to English again. "The translator is responsible solely for the accuracy of the translation to English," the agency's statement said.

The "fake Drew Barrymore interview" debacle first went down on Oct. 2, when writer and political analyst Adam Baron shared photos of Horus' copy on Twitter. "This interview with Drew Barrymore in the Egypt Air in flight magazine is, umm, surreal," he wrote of the non-sensical write-up.

A spokesperson for Barrymore said she "did not participate" in the Horus piece, when asked by HuffPost, and that her team was actively "working with the airline PR team" on the matter. (Bustle previously reached out to Barrymore's team, but did not hear back.)

Later, Chris Miller, the president of Flower Films and Barrymore Brands, spoke out on the interview as well, explaining in an email to BuzzFeed,

"The writer did write the Q&A portion of the interview based on what she says she heard Drew say at one of these [HFPA] press conferences but she says she did not write the intro. The writer is saying someone at the magazine write that intro which comes after the journalists name so it obviously seems it was written by her but in fact wasn’t. So technically Drew did not sit down with EgyptAir for an interview but a journalist who is a member of the HPFA sometimes supplies articles to EgyptAir and that’s what happened."

Barrymore has yet to publicly comment on the interview herself, but at this point, she might as well let sleeping dogs lie. There's already way too much to untangle, honestly. Were the oddball Horus quotes due to poor translation, misheard statements at a press conference, the still-mysterious "editor," or all of the above? The world may never know.

More like this
Watch The Emotional Trailer For Dolly Alderton’s 'Everything I Know About Love'
By Bustle UK
Everything We Know About 'Love Island' 2022 So Far
By Sam Ramsden
At 28, Minnie Driver’s Personal Life Was “Falling Apart”
By Kate Dwyer
Rebekah Vardy & Coleen Rooney’s Trial Has Officially Begun
By Bustle UK
Get Even More From Bustle — Sign Up For The Newsletter