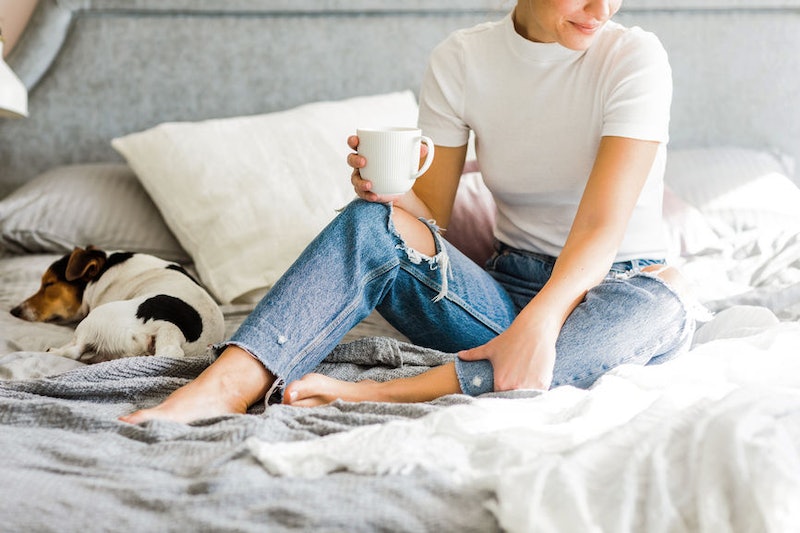 Napping is one of life's luxuries. Being able to take a little time to yourself to get some shut eye is like self care 101. Thing is though, not only is it hard to get that time to yourself but sometimes you might just be too juiced up on coffee to get 40 winks. Or I should say 10 winks, as it's a nap. However, recent research has shown that having a coffee before a nap might actually improve it. Ok, I know this sounds counterintuitive but guys, science said it's legit.

A 2003 study from Hiroshima University suggests that having a coffee before a nap makes the nap more effective, in that you don't sleep too deeply and you wake up more alert. The study tested how different variants including light, washing their faces, caffeine, and naps affected the alertness of 10 adult. Of all the different variants, caffeine and a nap were the most effective for reducing sleepiness and increasing performance levels.

As Vox reports having a coffee 15-30 minutes before you take your nap makes you less likely to fall into an overly deep sleep. Apparently, the caffeine is likely to kick in about 30 minutes after drinking which can help wake you up and minimise any post-nap grogginess, that "oh no, I napped too long" feeling that totally can mess up your day.

According to the National Sleep Foundation, napping is super good for souping up your alertness. Like seriously good. They say the perfect kind of nap is 20-30 minutes long and will improve your alertness without messing up your night sleep. This next bit is when things get a little sciencey so bare with.

According to Sleep Advisor, adenosine is the chemical in our brains that causes drowsiness. Every time you have a cup of Joe, the caffeine binds to your brain's adenosine receptors, which blocks them from causing that gnarly AF drowsiness. It doesn't however, get rid of the adenosine — only sleep can do that. So if you combine the power of the caffeine with actually sleeping and getting rid of the adenosine: you're sweet as a nut. You'll become one of those power nappers that you dream of being.

And as pro coffee research is on the rise, so is pro nap research. Proving that the two go together like bread and butter.

Coffee is of course well known and loved for not only its delicious taste but its ability to help put a little extra pep in your step. Some recent research has even pointed to positive benefits for your health. Yep, reports suggest that drinking seven cups a day can greatly decrease the risk of premature death.

A study from the International Agency For Research On Cancer and Imperial College London suggests that drinking more cups of coffee is linked to reduced risk of heart diseases and diseases of the gut. They analysed data from 521,330 healthy people over aged 35 and older from 10 EU countries, over a 16 year period.

So maybe you need to start trying to do a coffee nap every day? Or find a job that will allow you to take 30 minutes off and go for a coffee and a snooze? Sounds like the actual dream.