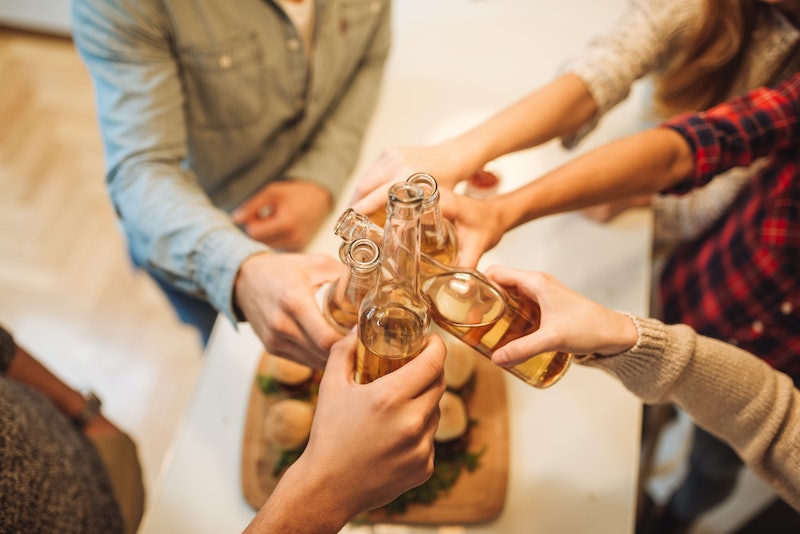 Peer pressure is a tricky thing. On one hand, as every ‘80s and ‘90s anti-drinking and drugs PSA memorably pointed out, it can propel people to do things they normally wouldn’t do. But on the other hand, it can feel like an unavoidable part of growing up and wanting to fit in. A recent study further unravelled the relationship between how our peers' behaviors, whether real or imagined, can actually affect our own habits. Researchers at Virginia Commonwealth University have discovered that how much college students think their peers are drinking is one of the key predictors of whether the student’s alcohol consumption will increase. Even if you're long past college, you probably recognize some of this self-peer pressure behavior today, too.

The study, published in the journal Alcoholism: Clinical and Experimental Research, looked at a sample of 755 college roommates with the goal of uncovering what variables played a part in predicting if a student would be more prone to drinking more in college. The students self-reported their drinking habits during the fall and spring semesters, as well as their perceptions of their peers’ alcohol use in the spring. The researchers also grouped people based on their residence hall and roommates to study other possible factors.

Factors outside the students’ control, like genetic predisposition to alcohol use, were linked to whether the students were prone to drinking more. Other variables included if the subject’s roommate drank heavily, and whether they thought their peers were drinking a lot. The students' perception of their peers' drinking habits turning out to be the most influential factor when it came to a person being likely to drink more.

The researchers also calculated average scores of how much each residence hall was drinking, comparing that to people who lived in those halls (and their habits). But surprisingly, there wasn't a big link between how much the dorm as a whole drank and whether or not the student would drink more as a result.

The study raises some thoughtful questions for colleges concerned about dealing with their students' drinking on campus, especially since these group behaviors appear to influence individuals in the group. But that tide already seems to be turning.

Abstaining from alcohol appears to be getting more and more trendy among the younger crowd. According to the 2018 Monitoring the Future survey, which focuses on American adolescents and young adults, the prevalence of heavy alcohol use has been on the decline since the late 1990s. Nonalcoholic bars are popping up across big cities, serving Instagrammable mocktails to hip audiences who aren't looking to drink. A recent Atlantic article proposed that while millennials may be drinking less, though, it appears that they're swapping alcohol for other substances like weed as it's become more accessible. While more data is needed on the topic, it's worth investigating how drinking and drug habits have changed in recent years, especially in influential social settings like college.