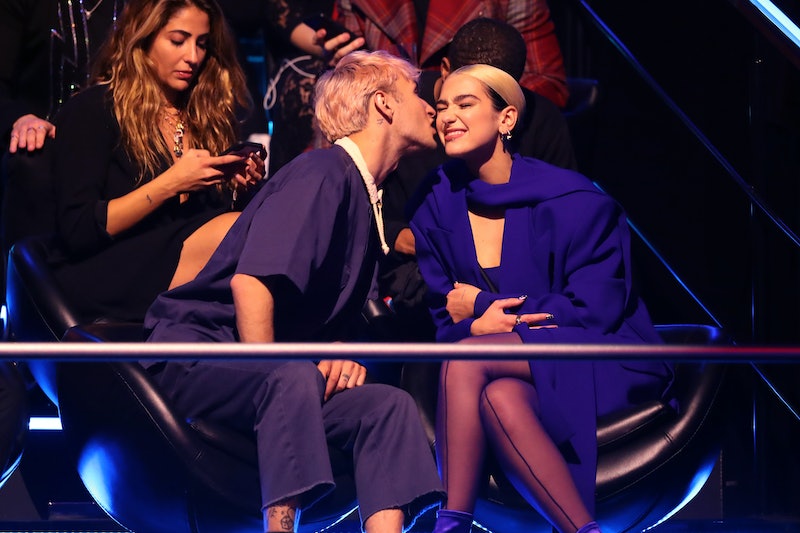 Dua Lipa is performing at the American Music Awards on Sunday night, which means it's possible her boyfriend Anwar Hadid will be in the audience to support her — and to walk the carpet with her before the show. The two haven't said much publicly about their relationship, but they have been photographed together, and there's still a fair amount of info floating around about how they wound up dating.

Lipa and Hadid reportedly first met in June, and it couldn't have come at a better time for either of them. Hadid was previously dating actress Nicola Peltz (Bates Motel), but her rep confirmed to Page Six that they split amicably in May 2018. Lipa, meanwhile, broke up with her longtime boyfriend Isaac Carew in early June after dating on and off for five years, per Elle. The same month, TMZ reported that Hadid reached out to Lipa — a friend of his sister Gigi's — for a date after learning she was newly single. The two had previously bonded over music, and things reportedly "snowballed" from there.

It wasn't long before they started being spotted out together, going on intimate dates in Malibu and even attending the Summer Time Hyde Park music festival in London and the Amazon Prime Day concert in New York soon after.

Earlier this month, they attended the MTV EMAs together. Viewers were quick to remark on the "awkward" body language between the pair, who at times seemed to be sitting strangely far apart, but other photos taken at the event tell a different story. At one point, Hadid even gave Lipa a loving kiss on the cheek.

Given how private the two been about their relationship, fans have had to rely on their public appearances together to get the slightest glimpse into the couple's personal lives. If Hadid attends the AMAs with Lipa, it's unlikely they'll be doing any interviews together, but it does mean that there will probably be some new photos of the couple. They originally bonded over their love of music, so what better place to celebrate that connection than a music awards show?