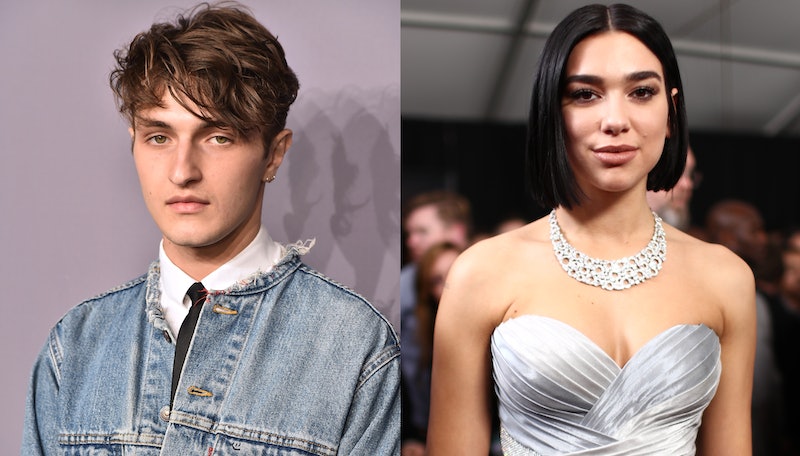 Pop superstar Dua Lipa has dominated the UK charts ever since the release of her debut hit, "New Rules." The young Brit enjoyed further success after follow-up track "One Kiss" went on to become last year's song of summer. More recently the singer has hit the headlines and for her budding relationship with a certain member of a famous modelling family. But how did Dua Lipa and Anwar Hadid meet? Here's everything we know about the A-List couple.

According to TMZ, Hadid and Lipa's relationship first began in early June 2019, after the American model — who also happens to make music — showed off some of his work to the Grammy Award-winner. A source told the website that things between the pair "started to snowball around early June," and after discovering that Lipa had split from her long-term boyfriend, Hadid "reached out to her for a date." Speaking to TMZ, sources went on to claim that the couple "went out, had a good time and liked each other enough to run it back."

So, the exact details surrounding how the young couple first met are somewhat hazy, therefore I have reached out to both parties for comment, and will update with any new information once it becomes available.

As reported by The Sun, Hadid and Lipa grew ever-closer throughout the month of June, and were even spotted enjoying an intimate date in Malibu. The relationship began to form a few weeks after splitting from ex-boyfriend Issac Carew, and when speaking about Lipa's recent split, a source told the newspaper, "Dua and Isaac have a lot of history and he holds a special place in her heart. But she has been in Los Angeles almost ever since they split again and she has been able to spend time with Anwar, who she really gets on with. They are a lot closer in age and it’s just been fun. It’s a confusing time for both Dua and Isaac but she is just going with the flow and doing what feels right."

According to Vogue, Hadid split from actor Nicola Peltz back in 2018, and has previously been romantically linked to the likes of Sofia Richie and Kendall Jenner — and although some reports suggest Hadid and Lipa first bonded over their love of music, you couldn't be blamed for assuming that Anwar's superstar sibling Gigi Hadid, who just so happens to be very friendly with the "New Rules" singer, could have played the role of matchmaker.

According to Harpers Bazaar, the pair were recently seen getting cosy at the British Summer Time Hyde Park music festival earlier in July — and as reported by People, showbiz's newest couple were spotted together just a few days later at the Amazon Prime Day concert in New York City.

However, despite being fairly open so far, neither party has publicly commented on the current status of their relationship. So perhaps this celeb couple are trying to keep things out of the limelight, and if thats the case, good for them.