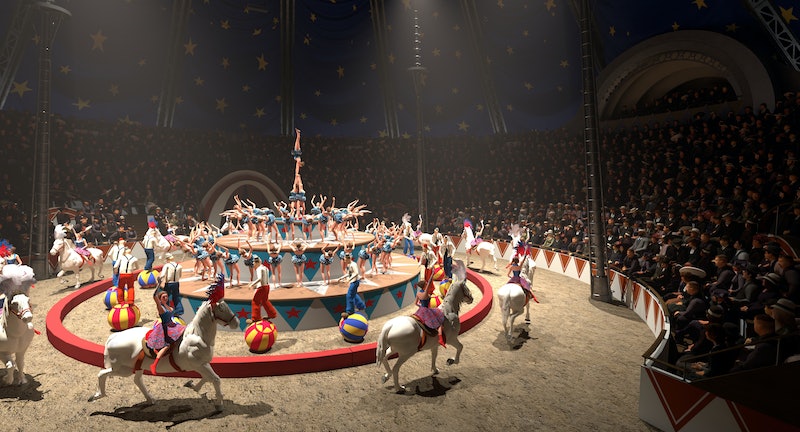 Disney's live-action Dumbo remake, in theaters on Mar. 29, draws on the original film, but it's not trying to copy an animated classic. Tim Burton's adaptation sets itself apart not only with new characters and a tweaked storyline, but also by populating its whimsical world with some incredible eccentric talents. The circus performers you'll see in Burton's Dumbo hail from circuses all around the world. Their authentic talents ground the film in reality, even though the baby elephant is, you know, up in the air.

"If you’re going to have circus performers it’s nice to go out and get people who embody who they are," says producer Justin Springer, talking to a group of reporters visiting the Dumbo set at Pinewood Studios in 2017. "It gives you this kind of amazing diversity when you cast people from around the globe." Prominently featured in the display of costumes, props, and concept art from the film that had been set up for us is a wall of photographs depicting each international circus performer. And each one conjures a different, fascinating live story.

In order to create the troupes in the circuses run by Danny DeVito's character Max Medici and Michael Keaton's character V.A. Vandevere, acrobats, fire breathers, and all sorts of circus artists were brought in to do their acts for Burton and the creative team. "Tim was able to kind of look and see and get to know different performers," says Springer, "and we cast out of that group. It just gives you these really great faces and performers who had these actual talents and then you start to figure out ways to integrate that into the story and hopefully gives that greater sense of reality."

"When you see them actually breathing fire and doing clown acts..." adds producer Derek Frey. "You can’t fake that." As Springer explains, the use of real performers makes blocking the circus scenes really "organic" for Burton and his talent. When you have people who bring their own skills to the table, and there's no circus training required, it gives everyone the freedom to collaborate and create something that looks really cool. "It becomes this really symbiotic kind of thing," Springer says.

There was a circus choreographer brought in as well, a Hungarian man named Kristian Kristof known as the "Gentlemen Juggler" with three decades of circus experience and multiple Guinness World Records.

There are professional actors playing circus performers in Dumbo too, of course. Eva Green plays a trapeze artist. Sharon Rooney, who you may know as the star of My Mad Fat Diary, plays a character named "Miss Atlantis" who does a mermaid act. Game of Thrones alum Deobia Oparei is also part of the troupe. Colin Farrell's character Holt, arguably the film's human protagonist, is more of a rodeo performer himself. "He sort of rocks the handsome cowboy really well," says costume designer Colleen Atwood. Then there's Keaton's character, V.A. Vandervere, who is their movie's take on entertainment magnates and showmen like P. T. Barnum.

Keep an eye on all that background talent while you're watching the film, because it's not a special effect. Dumbo himself may be a CGI elephant in a fantastical Disney world, but those circus tricks you'll see are 100 percent real. Advanced tickets are on sale now.

More like this
Before 'Bullet Train,' Revisit These Brad Pitt 'Fight Club' Premiere Photos From 1999
By Grace Wehniainen
Jennifer Coolidge Needs 'Legally Blonde 3' To Happen So She Stops Getting Hot Dog Jokes
By Jake Viswanath
Reese Witherspoon Gave Fans Hope For 'Legally Blonde 3' After This Surprising Movie Inspired Her
By Jake Viswanath
22 Movies On Netflix That Are Perfect For The Whole Family
By Bustle Editors
Get Even More From Bustle — Sign Up For The Newsletter