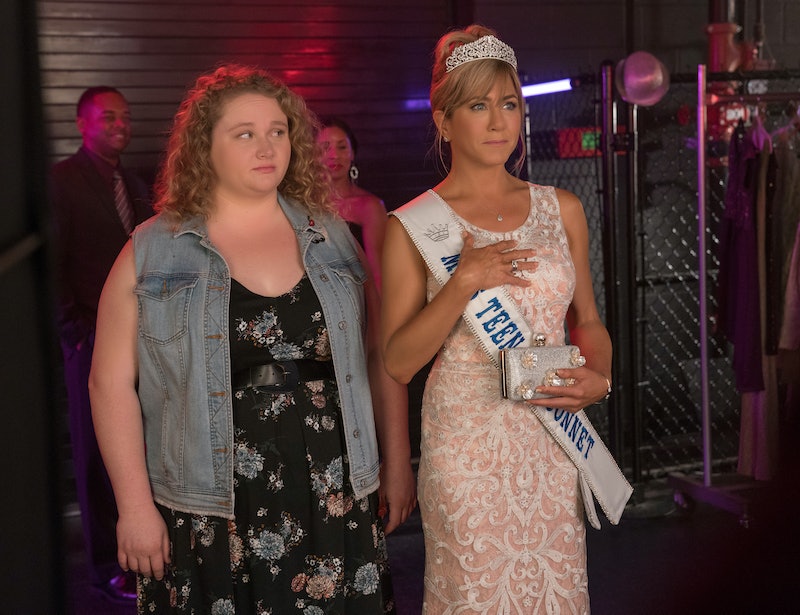 It took a mere three minutes — perhaps even less — for me to fall in love with Dumplin’. Before knowing where the storyline would lead, before knowing how Netflix would tackle a “fat girl joins the pageant” plot in a body-positive manner, my heart was invested. Because in the film’s very first scene, we see Dumplin’ herself, Willowdean Dickson (Danielle Macdonald), driving fast with the windows down, immersed in the music of Dolly Parton, living and thriving within her fatness.

For me, navigating childhood as an overweight boy was far from simple. There was never a time I felt that I could disconnect from my weight; There was a never time I could look in the mirror and not see the label “fat” spread across my forehead, or a day I could walk through the halls without someone throwing that word at me. But towards the start of my high school career, I discovered what was direly missing from my life: music. What started as a love of Broadway turned into a passion for song. In 2017, I discovered Dua Lipa, an artist who’d show me to be comfortable in my own skin for the first time.

In those moments, I'm able to completely forget about my weight and, for a rare few minutes, be a size-less human.

Dua Lipa is my version of Willowdean’s Dolly Parton. She’s an artist whose music allows me to escape the negativity and feel as sexy, confident, proud and happy as I wish. High school can suck, and so can every other aspect of your life. But those car rides where I'm able to escape it all, breathe the music, and live my best life with my closest friends in the backseat are the moments that showed me that fatness is not a limitation. In those moments, I'm able to completely forget about my weight and, for a rare few minutes, be a size-less human. And to see Willowdean screaming that message directly at me made me feel seen for the first time.

After that first scene, the film only gets better. Dumplin’ is so good, in fact, that I found it even more difficult to understand how Netflix failed so bad representing plus-size teens in Insatiable, the highly controversial series that came out earlier this year and which has a very similar plot: Both Insatiable and Dumplin' focus on a plus-size teenage girl, both include pageant storylines, and both protagonists have issues with their single mothers. But in every aspect that Insatiable fails, Dumplin’ thrives. All because of one reason: Willowdean does not hate her size.

In fact, for the most part, she’s completely fine with it. Sure, the skinny kids at school make comments and jabs at her size, but unlike charactrs in many other films that try to depict realistic plus-size teens, Willowdean doesn’t care. And that’s because for most of her childhood, she had Lucy Dickson to guide her: her plus-size, exuberant aunt who showed her that fatness does not limit you from being successful or happy. Unlike many other fat kids — myself included — Willowdean had a mentor to guide her through adolescence, having a huge impact on her self-confidence once Lucy passed away.

Willowdean’s mom, Rosie (Jennifer Aniston), is the reigning pageant icon of their Texas town. She devotes all of her time and energy to the competition scene, despite the fact that her daughter clearly has no interest. But when Willowdean is clearing out her dearly-departed aunt’s belongings, she comes across a pageant entry form that is half-filled out by Lucy. Wanting to show both her town and her mother that fat girls can shine, as well as to feel closer to Lucy who she can’t stop thinking about, she signs up for the competition. From there, Willowdean’s journey of self-discovery is empowering, eye-opening and, most importantly, accurate.

The film’s writer, Kristin Hahn, as well as Julie Murphy, who wrote original the novel, tackle a topic that I’ve never seen so perfectly explored: a plus-size love story. It’s not the main plot line of Dumplin’, but it’s there and it’s real. When a boy at work, Bo (Luke Benward), starts to express his feelings for Willowdean, she's thrown off guard. And when, under the star-filled sky, he kisses her in the back of his pick-up truck, her head is filled with questions, the main one being why. Why is he kissing her? Why does he find her attractive? Why does he like her?

At that moment, the insecurities she’s fought against come swarming back. Because it’s not accurate to say that once a plus-size person becomes confident, they’ll never be insecure again. No, self-love is a difficult journey, and I’m still learning that to this day.

Body positivity doesn’t mean always being positive; It just means trying to love yourself one pound more each day.

It’s taken me years to break free from the toxic mindset I had towards fatness and this was only achievable through the help of mentors and guides. But even now, often sparked by stress and anxiety, I slip into hours, days, weeks and sometimes months where I find it nearly impossible to view myself without distaste. Because after being conditioned to hate yourself and the way you look for decades, ridding your mind of every negative thought is impossible. There are days when you’re down and wallowing in your insecurities and days when you’re feeling hot and belting “IDGAF” by Dua Lipa. Body positivity doesn’t mean always being positive; It just means trying to love yourself one pound more each day.

With Willowdean’s love story, the Dumplin' writers tap into the age-old notion that most larger kids are fed: Happiness, love and marriage come after you get skinny. Before that, it’s just a constant race to lose the weight. So at that moment, seeing Bo express his true feelings for her, Willowdean can’t help but wonder why he, a skinny, conventionally attractive guy, finds value in her weight. And it takes the process of learning how to be a pageant girl for her to get the much-needed reminder that being fat does not make you unworthy. Fat people deserve all the love and happiness that skinny people do.

I’ll admit: I’m a crier. So it wasn’t shocking when I started bawling halfway through Dumplin’. What was surprising was the reason why: I wasn’t crying because the characters were hilarious or because there was an immensely sad death scene. I cried because, for the first time, I saw myself on screen.

There is one moment, however, when I was left wanting more. At the end of the film, Willowdean is listing off all the labels she chooses to identify herself with. And I was waiting, hoping that she would say, “And I am fat.” But she doesn’t; She chooses to not label herself by her weight. And while I completely understand her reasoning, I wanted to hear her reclaim the word “fat” in a way I’ve tried to do throughout my life. Fatness is not everything; it’s not a limiting factor. But — at least to me — it is a part of my life. Whether or not it has deep meaning behind it, I am a fat person, as is Willowdean.

But in the end, that really bears no significance. Dumplin’ is honest, entertaining, tear-jerking and relevant to its time. It’s the “fat girl pageant story” I never knew I needed. But most of all, Dumplin’ is the first time I’ve seen my own story actually play out on screen, and for that, I’m incredibly grateful.

More like this
I Tried Kendall Jenner's No-Pants Look As A Plus-Size Woman
By Sarah Chiwaya
Instagram & Facebook May Finally Lift Their Notorious Nudity Ban
By Allie Fasanella
Gerard Butler Insisted On Adding This Pivotal Scene To 'Plane'
By Catharina Cheung
Jemima Khan Used Her Own Life As Inspo For 'What’s Love Got To Do With It?'
By Darshita Goyal
Get Even More From Bustle — Sign Up For The Newsletter
From hair trends to relationship advice, our daily newsletter has everything you need to sound like a person who’s on TikTok, even if you aren’t.