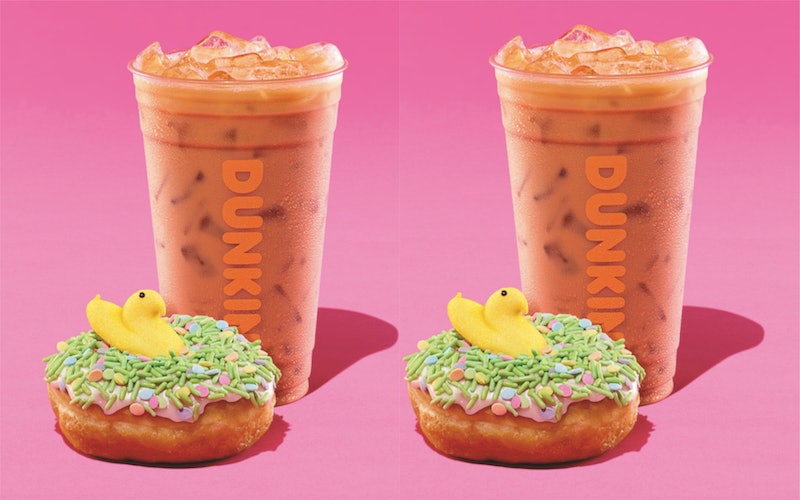 Dunkin' is a beautiful haven, because donuts aren't the only thing that keeps customers coming back to the chain — a variety of delicious coffee beverages are what gets fans out of bed and running to their local stores in the morning. If you were hoping that Dunkin' would release a little something special in celebration of spring, get ready to be amazed. Per a press release, starting April 1, Dunkin' will be launching Peeps Donuts and Peeps Marshmallow-flavored coffee drinks nationwide.

If you head to Dunkin' next month, you can look forward to a wonderful selection of spring-themed offerings. Dunkin’s Peeps Donut is the perfect item to satisfy your sweet tooth: it features white icing, a special green and egg-shaped sprinkle blend and a (simply adorable) mini yellow Peeps Marshmallow Chick on top. Trust me when I say that there will probably be a struggle between immediately taking a bite and wanting a few good shots for Instagram before you dig in.

If you need your caffeine in order to truly get the day started, Dunkin' has your back there too — with a delightful springtime twist. The chain's brand new Peeps Marshmallow-flavored coffee adds the classic, creamy taste of Peeps Marshmallows to Dunkin’s hot and iced coffee, espresso drinks, frozen coffee, hot chocolate, and frozen chocolate. It will very well be hard not go back for a second refill if you try this one.

The Dunkin' and Peeps partnership doesn't stop there, either. Between April 2 and April 4, Dunkin’s Willy Wonka prop-worthy custom coffee car will be driving along with the PEEPSMOBILE (a cute yellow car with a giant PEEPS marshmallow duck donning the top). Their journey will begin in the Bethlehem, Pennsylvania — aka, the hometown of Peeps. From there, the trip down memory lane will continue through the East Coast toward Dunkin's own birthplace in Quincy, Massachusetts. While they're traveling on the route, both of the cars will stop at a total of six Dunkin’ restaurants. When the parade-approved cars arrive at the locations, the lucky first 250 guests will be able to get their hands on a free small Peeps Marshmallow Flavored Iced Coffee, Peeps Donut, as well as other giveaways (while supplies last).

Make sure to keep your eyes peeled for the Dunkin' coffee car and PEEPSMOBILE — you can follow @Dunkin on Instagram for insider clues on where the cars will show up.

If you're still craving Dunkin' after you've tried the chain's seasonal Peeps-themed options, check out the rest of its spring menu. New beverage offerings include the New Cherry Chocolate Cold Brew, where customers will see that Dunkin’s ultra-smooth, delicious cold brew will feature a special combo of chocolate and cherry. Dunkin's will also unveil all-new Iced Tea Lemonade and Frozen Lemonade in time for warmer weather. Fans will find a brand new food option in the Sweet Sriracha Bacon Breakfast Sandwich (featuring egg, American cheese and four strips of sweet Sriracha bacon served on a croissant).

The new menu items will also be available at nationwide locations beginning on April 1 — make sure to get your hands on them quick, because they'll only be around for a limited time.