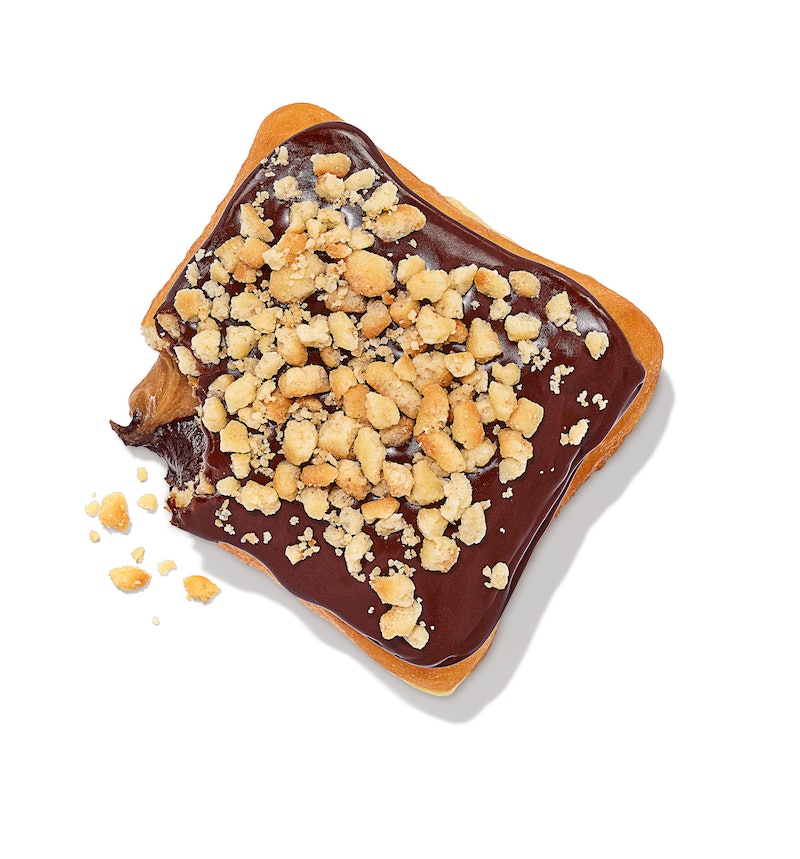 Dunkin's Valentine's Day lineup in here, and it includes a doughnut that is making history for the brand. As reported by Chew Boom, Dunkin' has a new cookie dough and brownie batter filled doughnut that is the chain's first double-filled doughnut. Two fillings at once! You would've thought that would have happened by now, but looks like there's still room for innovation in the world of massive doughnut chains.

First of all, this doughnut looks intense. Second of all, it is inspired by loooove. According to Dunkin' (no Donuts), "In the spirit of celebrating couples coming together, Dunkin’ is putting a pair in a square with its new Cookie Dough & Brownie Batter Double Filled Donut, its first donut featuring two fillings."

The doughnut is square-shaped and doesn't just have two fillings making up the same amount of filling a filled doughnut would normally have, but has double the amount of filling. (Filling, filling. Have I said filling enough? No? OK! Let's go on.) The two fillings are a "brownie batter-flavored buttercreme" and a "cookie dough-flavored filling." The doughnut is topped with chocolate icing and a crumbled pie topping.

But just because this doughnut is inspired by two people coming together to live as one... doughnut, that doesn't mean any singles out there can't enjoy it, too. Hell, get another plain doughnut and use that to eat the extra filling alone in the comfort of your own home. Don't tell me I'm the only one who thought of this when I saw that filling-to-doughnut ratio. It's simply too much filling for one doughnut.

In addition to the Cookie Dough & Brownie Batter Double Filled Donut, Dunkin' has two other Valentine's Day doughnuts this year. There are the new Bling Sprinkles Donuts, which are frosted doughnuts covered with shimmery and heart-shaped sprinkles. These come in flavors including Chocolate Bling Frosted, Strawberry Bling Frosted, and Vanilla Bling Frosted.

The third Valentine's item is a returning one: heart-shaped doughnuts. They come in several different flavors, including jelly-filled and Boston Kreme.

But that's not all! The chain's other Valentine's Day special is an odd one: Dunkin' wants to marry you. According to a press release, "On Saturday, February 9th from 11 AM to 3 PM, Dunkin’ will be taking over Sure Thing, a Wedding Chapel by Flora Pop, in Las Vegas, where the first 100 couples that stop by will be given an exclusive Dunkin' donut bouquet for their ceremony, or just as a unique Valentine’s Day gift." A Dunkin' doughnut bouquet, if it's not clear, is a bouquet made out of doughnuts, not a Dunkin' Donut-themed floral bouquet.

Getting married (or remarried) Dunkin' style also involves a chapel "decked out in Dunkin’ decorations and bling" and an officiant who has "Dunkin' pink hair." This is... a lot. But to each their own, I guess. And, hey, even if you don't want to get married by a Dunkin' branded officiant, if you're nearby the venue during that very specific time period, you can get free doughnuts in the shape of a bouquet. For everyone else, heart-shaped and double-filled doughnuts await you at your local store.