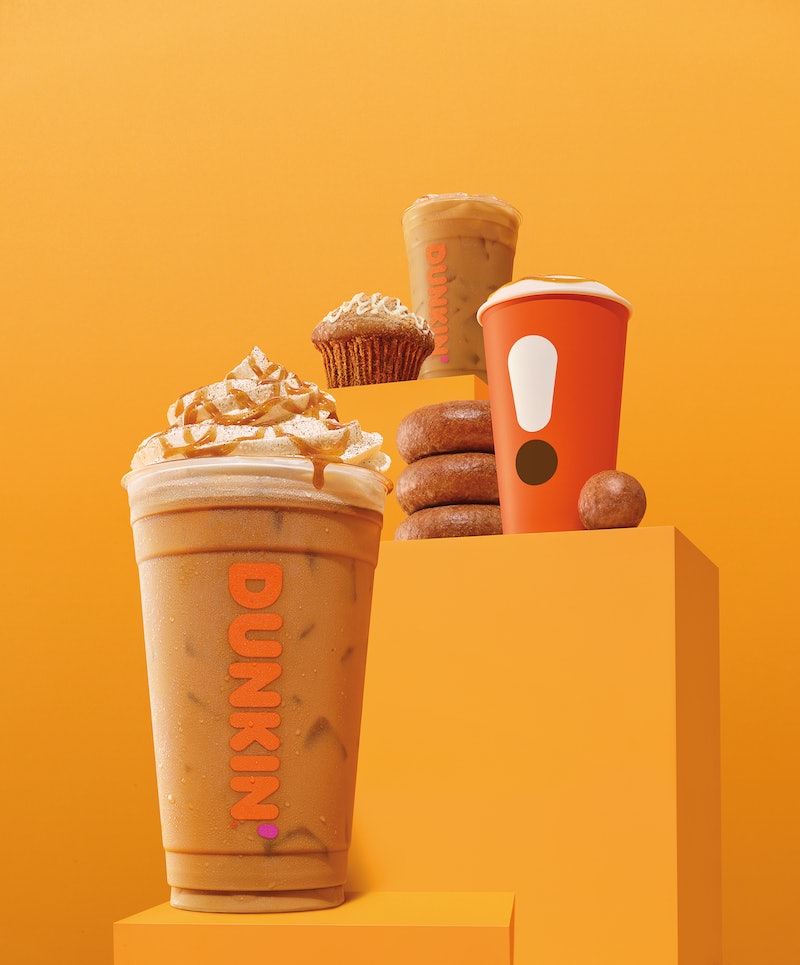 I don't know if you've heard, but fall is here. Yep, it's moved up from September 23 all the way to mid-August — pumpkin flavored coffee just has that much of a draw. One brand that's ready for fall very early is Dunkin', formerly Dunkin' Donuts. Dunkin's new fall and pumpkin menu items were announced on Monday, August 12 and will start hitting stores soon, along with some returning favorites.

The new items are a Cinnamon Sugar Pumpkin Signature Latte, an Apple Cider Donut, and an Apple Cider Munchkins donut hole. It's kind of surprising that Dunkin' hasn't had an Apple Cider Donut before, but that could be because the chain did try Apple Orchard Donuts in the past, which were "apple cider flavored cake donuts with cinnamon sugar topping." Sounds pretty similar. Maybe they reworked the recipe to make it more cider-y. As for the latte, that sounds like a pumpkin spice latte, but with extra cinnamon? PSL fans out there probably won't mind doing a taste test.

In addition to these new recipes, Dunkin' will also be bringing back its Pumpkin Coffees, Pumpkin K-Cup pods, Pumpkin Muffins, and Pumpkin Donuts. The Pumpkin Coffee comes in whatever form you could possibly want: hot, iced, espresso, frozen, and cold brew.

The fall items — new and returning — will be available in Dunkin' locations starting on August 21. But, select cities will get the menu sooner, we just don't know which cities yet, because that's part of a big tease from the brand.

On August 14, Dunkin' will rebrand eight of its locations to Pumpkin'. (Get it? They put an apostrophe on the end of "pumpkin".) This means the stores will say Pumpkin' on the outside instead of Dunkin' and have pumpkin decor. At these locations, the first 250 guests will be able to get a free small iced or hot Pumpkin Coffee. The stores will also have a limited amount of pumpkin-scented lip balm.

Again, the stores that will become Pumpkin' have not yet been announced, but Dunkin' has shared that the cities where they will be located spell out the word "Pumpkin". So, for example, Portland, Utica, Madison, the other Portland, Kansas City, Indianapolis, and New York. To be clear, I totally made those up. The fine people of Madison should not be mad with me if a Pumpkin' store doesn't show up there. (But, if I did get these cities right, I will accept a free lip balm and a giant check, Dunkin'.)

In order to find the real cities, those interested can check Dunkin's Instagram where they'll be leaving clues until the full announcement comes.

For now, Dunkin' still has some summer promotions going. Currently, customers can get a medium hot or iced cappuccino or latte for $2 between 2-6 p.m. at participating locations. And Dunkin's special menu items at the moment are Hershey's candy flavored drinks. The chain has Hershey's Cookies 'n' Creme and Heath coffee and espresso drinks, and Kit Kat Coolatta frozen drinks. If you're more of a chocolate person than a pumpkin person, get 'em while you can.