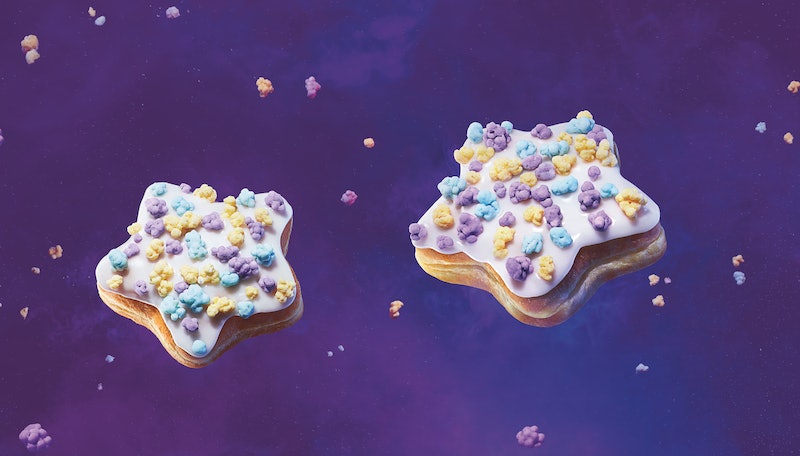 Prepare for lift off, donut lovers. Dunkin' has launched a new Shooting Star Donut and my world is now orbiting around this fluffy confection. If you wished upon a star for winter to be over and for spring to arrive already, congratulations. The cosmic shaped donut is taking over the Dunkin' menu just in time for the seasons first blooms and juicy flavors.

There's nothing like starting the day with a donut and a coffee. I understand this, you understand this, police officers understand this and now apparently astronauts do too. The new menu line up at Dunkin' is space themed and you'll be starry eyed at the offerings. New to the menu, available April 24, will be a cosmic Coolatta, and ice cream-flavored coffee in addition to the Shooting Star Donut.

An official press release described the Shooting Star Donut as featuring "white icing topped with blue raspberry flavored popping candy clusters in blue, purple and yellow for a flavor blast with each bite." If the universe is made of raspberry candy clusters, I'm enrolling in Space Camp right now. Consider the release of this special donut your permission to launch yourself towards your local Dunkin' location for a taste of the stars. Houston, we have a new favorite donut flavor.

The space-themed menu isn't landing in Dunkin' for no reason. This July marks the 50th anniversary of Apollo 11's historic landing on the moon. Celebrate the occassion by slurping down the entire galaxy, or, the new Cosmic Coolattas that combine two Coolatta flavors to make your cup appear galactic. This series of frozen beverages will not only have you ~chilling~ through the summer season but also wondering what else is out there.

Down here on Earth, the coffee is great. Especially when it's getting an ice cream-flavored makeover courtesy of a Baskin Robbins inspired menu. Three new coffee flavors will debut on April 24, including a Banana Split coffee that, according to the press release, will have be a cup full of "banana flavor with hints of chocolate, strawberry and vanilla ice creams." Other coffees include the new Pistachio Almond Fudge and the return of the Butter Pecan coffee. These coffees can be enjoyed hot or iced.

Take me to your leader — I mean, nearest Dunkin' location — quickly. The seasonal menu featuring intergalactic flair will only be available for a limited time. Hop on your hover board, your makeshift space ship or just into your car now for a taste of space.