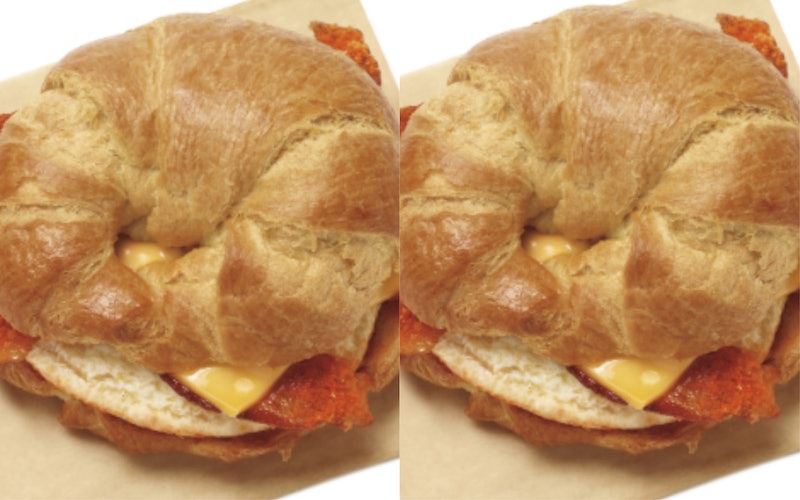 Dunkin' does a lot of things very well. The chain is a go-to for many breakfast fans and coffee lovers. But sometimes even the most devoted bacon, egg, and cheese eaters want to kick it up a notch. Dunkin' has clearly been hip to one way to make that happen that's so simple but so drastically changes the composition of the sandwich, that it deserves all the fanfare it's about to get — Dunkin' launched a Sweet Sriracha Bacon Breakfast Sandwich, along with other delicious menu items to boot.

Per a press release from Dunkin', the Sweet Sriracha Bacon Breakfast Sandwich is comprised of "egg, American cheese and four strips of sweet Sriracha bacon, served on a croissant." It promises to "heat things up even more for breakfast lovers."

According to Chew Boom, Dunkin's Sriracha options don't end there — the website reports that Dunkin' will also serve a Sweet Sriracha Bacon Wake-Up Wrap, serving as somewhat lighter fare if you're on-the-go. Basically, it's a good time to be a fan of Sriracha and be in proximity of a Dunkin', no matter what the time of day.

Chances are you're already familiar with Sriracha, to the point where you may or may not own a Sriracha bottle keychain for sauce emergencies. The now-iconic sauce is made from an assortment of chilis, vinegar, sugar, salt, and garlic. According to the Los Angeles Times, its name stems from the city of Si Racha, in Thailand, where the sauce originates.

Though the condiment with an undeniable kick has been around since the 1930s, it wasn't until the 1980s that it began receiving widespread attention in the U.S. The Huy Fong Foods Factory in Rosemead, Calif. is the leading manufacturer of the stuff. You can thank them for the uniquely shaped bottle with a green cap (they make them in the factory). Now, you can skip the bottle entirely and have Dunkin' go ahead and sauce it for you.

While there is clearly a focus on spicy at Dunkin' right now, that doesn't mean it has abandoned the sweet life. Peeps are arguably the quintessential springtime confection. The florescent-colored marshmallow chicks are iconic to the Easter season, no matter how you feel about them. But even if you don't like them plain, perhaps you will as part of your breakfast.

Beginning April 1, you can snag two Peeps-inspired items at participating Dunkin' locations. The Peeps Donut, per a press release, is a classic donut that features "white icing, a special green and egg-shaped sprinkle blend and a mini yellow Peeps Marshmallow Chick on top." So, what does something so decadent pair with? An equally Peep-ified sip. Per aforementioned press release, Dunkin's Peeps Marshmallow-flavored coffee "brings the delightful, creamy taste of classic Peeps Marshmallow to Dunkin’s hot and iced coffee, espresso drinks, frozen coffee and frozen chocolate."

Head over to Dunkin' now to try the new menu items — just remember to grab yourself some of the Peeps items to cool down if you're going to take the Sriracha options for a spin.