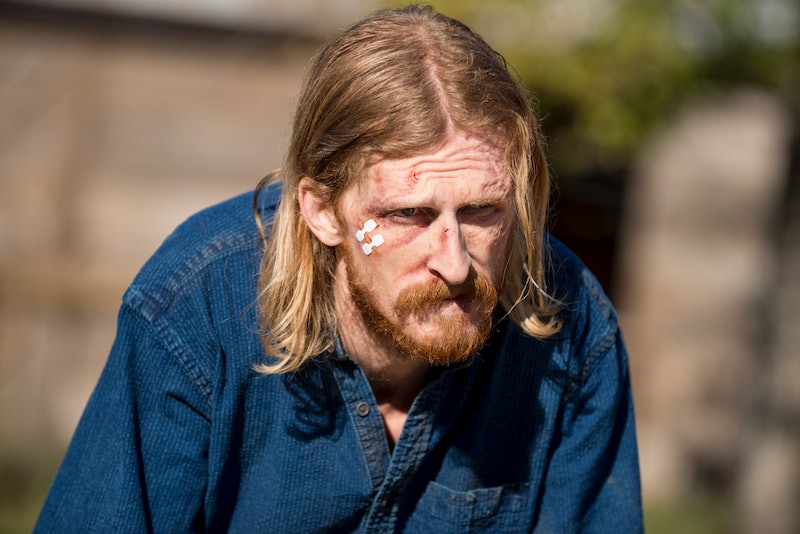 When June and John find him at Humbug's Gulch, Dwight is still looking for his missing wife, following clues from Virginia to Texas by way of Georgia. He says that he has been searching for Sherry for about a year. He and Morgan left The Walking Dead at about the same time, in the aftermath of the war between Rick and Negan at the end of Season 8. Dwight was exiled by Daryl and Morgan left of his own accord a few months later. So this timeline actually kind of makes sense! Even in the zombie apocalypse, that's enough time for them to hike and drive to Texas — especially as each was traveling on his own.

So we officially now know exactly when the spin-off is taking place compared to the original series again, after Fear began as a prequel and subsequent seasons played a quick game of catch-up. Funnily enough, they're a prequel once more. Since The Walking Dead had two major time jumps in Season 9, Fear The Walking Dead is now six years behind. The show is now free to fill in that gap.

This is also a curious revelation for you conspiracy fan theorists out there convinced that Rick Grimes will return on Fear The Walking Dead. First, back in Rick's final TWD episode, fans thought they heard Alicia and Morgan (and maybe even Dwight) on Jadis/Anne's walkie talkie. Then, this season on Fear, Althea found a three-ringed symbol in her research that matched the marking on the helicopter that took Rick away — and she was immediately kidnapped after finding it.

Now come to think of it, in Season 9, when Rick was taken away by said helicopter, "about a year" had passed since the Savior war. Thanks to Dwight's confirmation of the timeline, we know this is all happening around the same time. This theory is getting more and more likely, y'all. Were they at the bridge when it blew up? Did they take Rick, or know the people who did? Did those same people take Al? While we may not actually see Andrew Lincoln on Fear The Walking Dead, the series is definitely connecting itself to that mystery in some way.

Whatever it means for the future of the show, it's nice to see Dwight finally get a chance to start over on Fear The Walking Dead with a new, caring community of survivors. He can finally be more of a Daryl figure, as he wished. Hopefully Dwight and Sherry will be reunited as well. She escaped captivity as one of Negan's many wives, and clearly wants to be found as she embarks on her own journey. After everything Dwight has been through on The Walking Dead, he could use some good news and happy times.