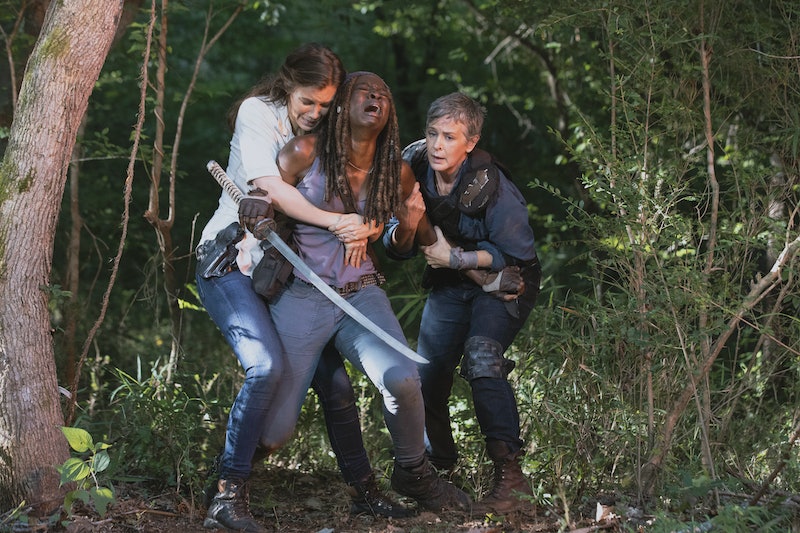 With Rick Grimes gone on The Walking Dead, Sunday's episode felt like a second pilot, or repilot, of the AMC series. For the remainder of Season 9, The Walking Dead jumped forward six years. So much has changed in that time that it's a clean start, with new dynamics and new characters to explore. Again, it can't be stressed how much it feels like a whole new show, for better or worse.

The episode explored the changes that have happened in the intervening years primarily through the lens of a new group of survivors who were brought to Alexandria by Judith Grimes. As they encountered our seasoned group for the first time, fans were able to observe what all is new. Michonne, who is now leading Alexandria in the aftermath of Rick's "death" and the bridge collapse, initially does not want to let the survivors stick around. However, by the end of the episode Judith convinces her to extend to them the sort of hospitality that Rick would have. Well, sort of stay. She offers to escort them to the Hilltop and see if Maggie will take them in.

Are all three main communities run by women now — Maggie, Michonne, and Carol? King Ezekiel is still calling the shots in his community, but let's be real about who is really in charge. Here are the other major changes this time jump has revealed.

Between Carol literally letting her hair down and rocking the hippie aunt look you always knew she had in her, Michonne's side part, and Rosita's triple braid, everyone has been experimenting with their signature looks in the past six years. Post-apocalyptic braids in general seem very in. Even Eugene has added to his usual party in the back, with an even longer braid finishing off his mullet.

Michonne May Be Losing It

Should we be concerned that Michonne has long conversations with Rick's memory? Also, what's going on with that X scar marked on her lower back? At the very least, it's tugging at the heartstrings. It feels like maybe something else very major happened since Rick blew up the bridge.

She also has a son, named RJ — apparently she was pregnant when Rick blew up the bridge and was taken away. Can Andrew Lincoln come back to the show, like, now?

Judith Has A Homework Helper

Does Judith and Negan's scene together mean that Judith is taking Carl's storyline from the comics, becoming disturbingly close to the prisoner? Doesn't seem like it; that little girl has more sassy comebacks in her pinky than we have in our whole bodies. But they are spending time together while Judith does her homework and chat about the state of the world.

Daryl Is Living Off The Grid

Almost more heartbreaking than Michonne's conversations with Rick is how Daryl seems to have completely left and cut himself off from the community. Does he blame himself for Rick's (presumed) death?

Carol Is A Freakin' Queen

Were you worried that Carol's long hair meant she was settling down with no more savage moves? You were wrong! The Saviors thought they could pull one over her and Henry, and she retaliated by literally burning them alive. Yup, she's still got it. She also seems to know what Daryl's been up to judging by the look on her face when she and Henry cross paths with him, which is nice to see.

The Whisperers Are Coming

There is nothing wrong with your television set, do not adjust, it did sound like those walkers were talking at the end of the episode. Who is chasing Eugene and Rosita? Most likely, those are the Whisperers from the Walking Dead comics, an antagonist group that wages war on the survivors and likes to disguise themselves as walkers. They're method about it, too, well beyond the "cover yourself in guts" trick that some of the survivors have used to survive in a hoard before.

The Kingdom is not doing well, and Alexandria isn't so hot either. What's left of the Saviors, before Carol took a match to some of them, also seem to have broken their alliance.

Michonne is taking the group of newbies to the Hilltop in the next episode, so we'll get to see what's up over there. There are definitely more changes to come, and based on what we've seen so far, fans are just going to have to adapt.

More like this
Will 'The Walking Dead' Return For Season 12?
By Grace Wehniainen
'Bridgerton' S3 Teases Exciting Social Season For Penelope Featherington
By Bustle
David Tennant’s Transformation In ITV’s 'Litvinenko' Is Astonishing
By Sophie McEvoy
Another 'Sex Education' Star Has Joined The 'Doctor Who' Franchise
By Darshita Goyal
Get Even More From Bustle — Sign Up For The Newsletter