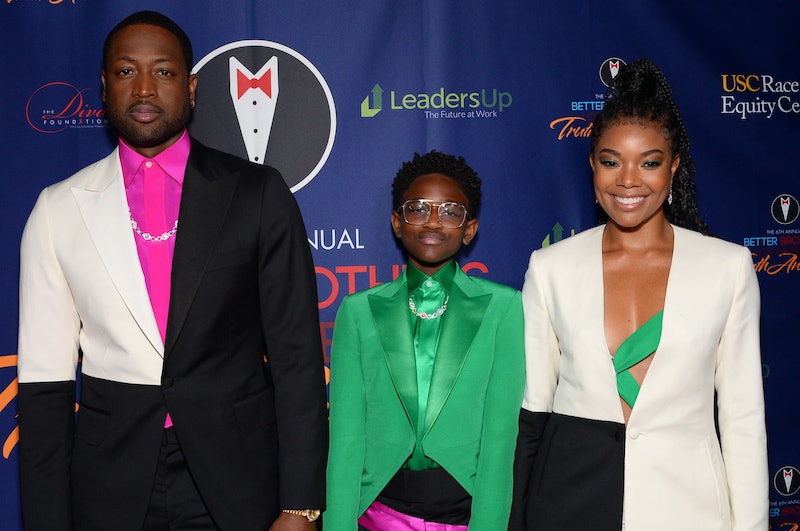 “Everyone allow her to re-introduce herself her name is Zaya Wade! Last night was Zaya’s first red carpet and we couldn’t have been prouder of how she handled the questions that were asked of her,” Dwyane captioned the photo of Zaya. “She has emerged as one of the young faces and voices for the LGBTQ+ community.” In the snapshot, Zaya is donned in a green blazer and button up and black trousers with a touch of magenta from designer Rich Fresh.

Union shared an Instagram snapshot of her own of the trio on Sunday. “It was an EPIC night filled with so much love & a real sense of community,” she wrote. “It was important for Zaya to be a part of such a beautiful night & reminding her of all the love & support she has.” In color-coordinated looks that complimented Zaya's outfit, Dwyane wore a colorblock black and white suit fashioned with a magenta button up, while Union donned a similar suit with a green finish.

In conversation with Good Morning America’s Robin Roberts in February, Dwyane said Zaya has known she was trans since she was 3 and credited his daughter for educating the family about the community. “Zaya knew two things: she knew straight and she knew gay. But Zaya started doing more research,” he said. “She was the one who sat down with us as a family and said, 'Hey, I don't think I'm gay.' And she went down the list and said, 'This is how I identify myself. I identify myself as a young lady.’” He added, “My daughter was my first interaction when it comes to having to deal with this conversation. Hopefully I'm dealing with it the right way.”

In an interview Entertainment Tonight that month, Dwyane explained the decision to share Zaya’s journey publicly. “We're not the only family that's had to deal with gender expression, gender identity, sexuality with their child," he said. “We understand the position we've been put in, especially in our community; even though it's not always a popular thing to speak out on issues that people are uncomfortable with or not as educated on, this is the platform that God gave me and my family.”

More like this
"Lavender Haze" Star Laith Ashley Breaks Down Filming With Taylor Swift
By Jake Viswanath
Janelle Monáe’s Nonbinary "Coming In" Was About "Truth & Authenticity"
By Brad Witter
Ozzie’s Coming Out Scene With Kitty On 'That ’90s Show' Has Twitter Sobbing
By Brad Witter
Adam Lambert Called Out The George Michael Biopic Over Potential Casting
By Sam Ramsden
Get Even More From Bustle — Sign Up For The Newsletter
From hair trends to relationship advice, our daily newsletter has everything you need to sound like a person who’s on TikTok, even if you aren’t.