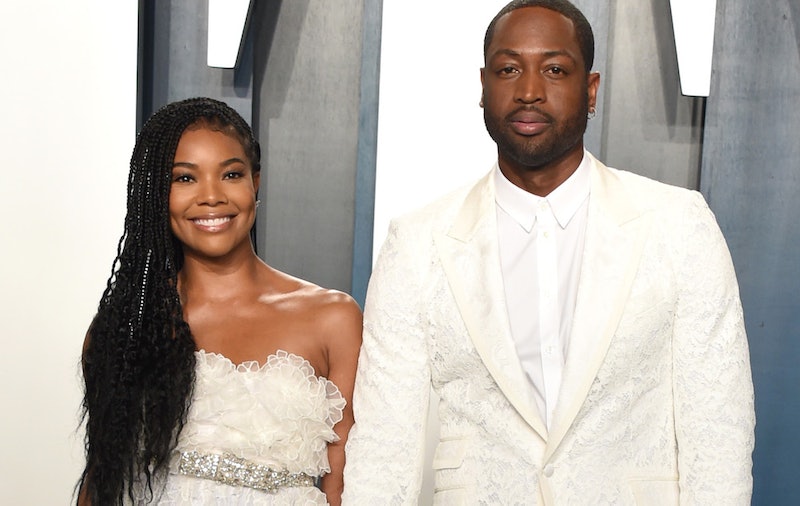 In the wake of Gabrielle Union’s discrimination complaint filed against her former America’s Got Talent employers, Dwyane Wade expressed support for Union and called out NBC in a series of tweets. According to various reports on June 4, Union filed a discrimination complaint against Simon Cowell, NBC, FremantleMedia, and Syco Entertainment. (Bustle previously reached out to representatives for Cowell, NBC, Fremantle, and Union on the matter.) In the complaint, which comes six months after the news broke that Union would not return to AGT, Union accused NBC Entertainment Chairman Paul Telegdy of trying to “silence and intimidate” her after she called out “racist and misogynist” conduct on set.

Well, NBC responded to the allegations in a statement issued on June 4, calling them “categorically untrue.” Soon after, Wade took to Twitter and criticized the company. “Y’all have deemed her a liar after months of trying to inform y’all of the issues in the work place and also make sure other employees of color that comes after her won’t have the same experiences,” he tweeted. Wade then added in another tweet, “So instead of making sure your work environment is a better place for everyone. Y’all have decided that she what? Made it all up because she lost a job? She’s a black woman in Hollywood she has lost out on many jobs.”

Wade also alleged that his family had been watched and followed in the wake of Union’s departure. “My daughter couldn’t even go to swim class without us being trailed by people looking for answers,” he tweeted. “Well y’all have the answers and y’all still don’t wanna listen to them.”

In November 2019, news broke that Union would not return to AGT after one season on the show. A more detailed report soon followed that claimed Union had expressed concern over the series for fostering a toxic workplace culture rooted in racism and misogyny. In December 2019, Union met with the network and they announced plans to launch a deeper investigation into her claims. “We had a lengthy 5-hour, and what I thought to be, productive meeting yesterday,” Union tweeted at the time. “I was able to, again, express my unfiltered truth. I led with transparency and my desire and hope for real change.”

In May, however, NBC announced the results from the investigation and stated that “no one associated with the show made any insensitive or derogatory remarks about Ms. Union’s appearance, and that neither race nor gender was a contributing factor in the advancement or elimination of contestants at any time." The statement continued, claiming, “The investigation has shown that the concerns raised by Ms. Union had no bearing on the decision not to exercise the option on her contract.”

Union’s decision to file a complaint comes after NBC Entertainment issued a statement on May 31 that expressed solidarity with their Black colleagues following the nationwide Black Lives Matter rallies, which have been organized to demand justice for George Floyd, the Black man who died while pinned under a white police officer in Minneapolis.