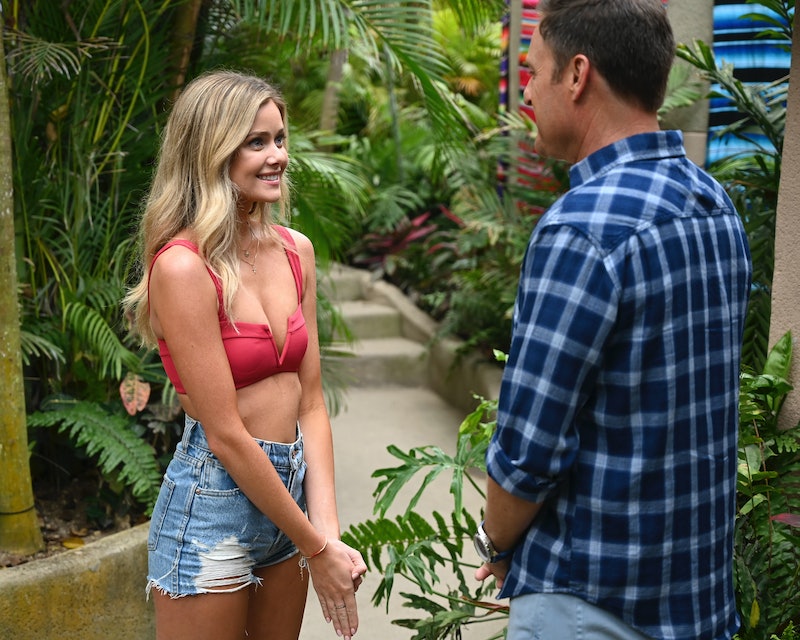 After seeing Hannah G. miss out on her Fantasy Suite date on The Bachelor after Colton Underwood jumped the fence to chase after Cassie, it's good to see that she's getting another shot at love on Bachelor in Paradise. And even though it's only the first week, it seems like she's already having major chemistry with someone. Hannah G. and Dylan hooked up on BIP, and fans love this potential romance so much that they've taken to Twitter to react to this development.

At first, things didn't start off so great for Hannah. She was really hoping to spend some one-on-one time with Blake, so when he ended up giving his date card to Tayshia instead, she admitted that she was bummed. But it truly seems like it worked out for the best, because she and Dylan totally hit it off — and already, they're so adorable together that they have the potential to become one of this season's fan favorite couples (if they last).

At first, Dylan was really nervous, which added to the cute factor in a major way... and their hookup was pretty steamy. It became clear pretty quickly that Hannah is now probably like, "Blake who?" because she and Dylan had such an instant connection.

Most people couldn't get enough of the way Dylan was instantly attracted to Hannah, because TBH, that's exactly what she deserves:

So many fans loved every single second of their conversation and time together, because there were so many adorable moments that it's truly difficult to pick a favorite.

And others wanted what they (already) have for themselves, because to be totally honest, the way that Dylan looked at Hannah was so precious.

Basically, everyone is shipping these two as a couple — even though it's only been one episode, and it seems like this season of BIP is going to be chock full of unpredictable drama, according to the trailers we've seen so far.

So many things could happen between now and the end of the season — especially since promos show that Hannah will definitely be interested in a few of the other men in Paradise besides Dylan. They may not be endgame right away, but this is Paradise, and who is? These things take time (and by time, that means a few weeks until the season is over).

Hannah and Dylan already seem to have so much potential, so it'll be fun to see where things go from here. Hannah was quickly beloved on The Bachelor, so it's easy to root for her and her happiness, and even though fans didn't get to know Dylan quite as well on The Bachelorette, he seems very sweet himself.

Bachelor In Paradise has only just begun, so it's hard to say if Hannah and Dylan will go the distance. But at this point, it's probably safe to say that they're off to a very good start. And who knows? With BIP's track record of creating lasting relationships, it's completely possible that they could end up living happily ever after.

This article was originally published on Aug. 6, 2019