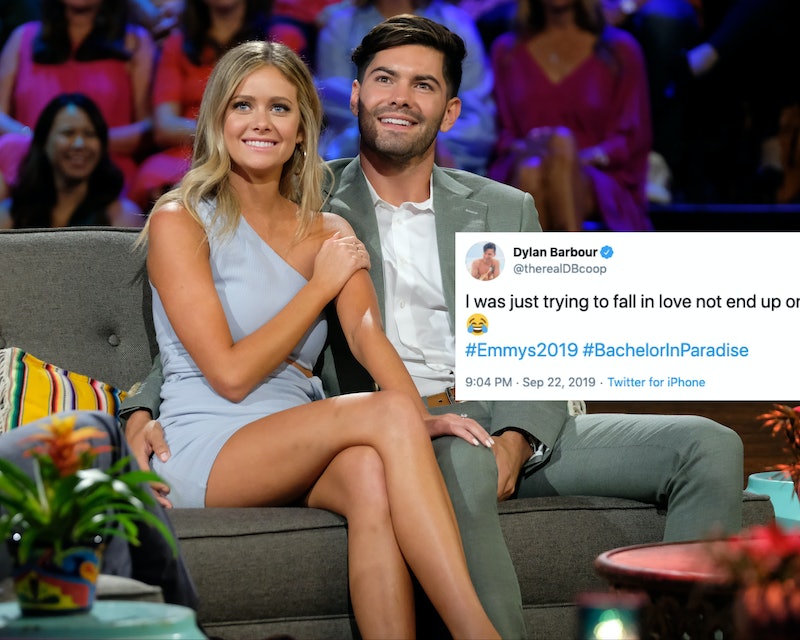 For stars of Bachelor in Paradise, the past week has been a whirlwind after the finale aired, and now, there's another exciting moment to add to the list. At Sunday night's Emmy Awards, a quick clip of the show played, and now, one of the stars is freaking out. In fact, Dylan Barbour's reaction to his BiP Emmys cameo is too funny, and it's exactly what fans would expect from something as cool as being featured on one of the year's biggest award shows.

Fans who watched the Emmys already know that a quick clip of BiP played during Bryan Cranston's speech during the opening — and it just so happened to include a moment from Dylan's proposal to new fiancée Hannah Godwin. Although the reality show wasn't nominated this year, it's still part of the TV landscape, so it's not all that surprising, but of all the clips that the Emmys could have included, it just so happened to involve Dylan, and it seems he's pretty pumped about it.

Dylan's reaction came in the form of two tweets, with one showing off a screenshot of the moment from BiP playing on a screen above the stage, which he simply captioned, "Uhh holy sh*t," hashtagging "#Emmys2019." Yep, that pretty much sums it up.

In a second tweet, Dylan added, "I was just trying to fall in love not end up on the Emmys," along with a crying-laughing emoji.

Hannah was also pretty impressed with the moment, retweeting a couple of posts about it after it happened. When someone alerted her to the fact that she'd been spotted in the opening of the Emmys, she quickly replied, "Well hey whoa!"

She also retweeted Chicks In The Office when they pointed out that Dylan and Hannah were on the Emmys — and Dylan responded to that tweet, too.

Not to be outdone, Hannah and Dylan's BiP castmate, Demi Burnett, also threw in her two cents, writing, "Appalled that you were invited and I wasn't." Demi also quickly realized she made a mistake and Dylan didn't attend the event, he simply appeared in a clip. She then tweeted, "Wait I’m wrong you weren’t there, hahaha loser (projecting bc I’m embarrassed)."

To be fair, Demi's relationship with Kristian Haggerty was pretty groundbreaking for the series, and fans definitely wouldn't have been bummed to see her featured, too. But this time, it was all about Dylan and Hannah, and being that they had such a chill, drama-free season, it's sweet to see them getting a piece of the spotlight, too.

As entertaining as Bachelor in Paradise may be, it doesn't often receive much association with award shows, so it's a big deal that a clip from the show made an appearance at the Emmys, television's biggest night. Hannah and Dylan seem to truly be making the most of their time to shine — maybe this screenshot of the moment should be included in their wedding invite? Just a suggestion. Dylan may never have expected to have ended up on the Emmys, but it's a special, unforgettable moment nevertheless, especially since it features such an important milestone between him and his wife-to-be.