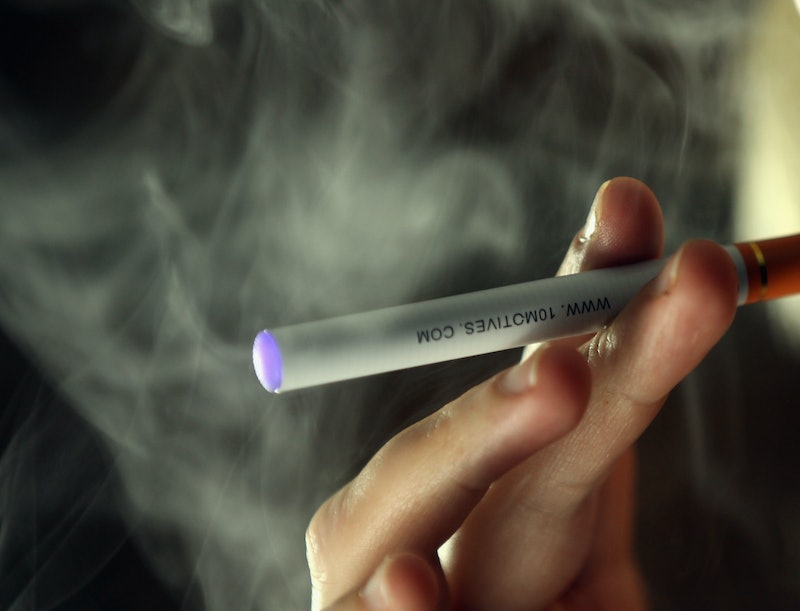 E-cigarettes are often held up as a way to help smokers quit, but a new study has found otherwise. E-cigarette flavors' health effects could include increased risk of heart disease, the study, published in the Journal of the American College of Cardiology, suggests. While advertising campaigns would have you believe that electronic cigarettes are a healthier alternative to regular cigarettes, this team of Stanford University School of Medicine-led researchers came to different conclusions.

Whether it’s cotton candy or gummi bear, the flavored liquid is one of the major incentives for young people to smoke e-cigarettes, despite many warnings and attempts from e-cigarette companies to keep their products out of minors' hands. Yet, the same liquid that many find so appealing in e-cigarettes may contribute to the development of cardiovascular disease. The Stanford researchers came to this conclusion after subjecting laboratory-grown endothelial cells to e-liquid exposure. Endothelial cells line the interior of human blood vessels, and the lab results found that cells exposed to e-liquids were less viable and more vulnerable to DNA damage and cell death.

“This study clearly shows that e-cigarettes are not a safe alternative to traditional cigarettes,” Dr. Joseph Wu, MD, PhD and director of the Stanford Cardiovascular Institute said in a press release about the study. And while the study found that the menthol and cinnamon flavors were particularly damaging, all forms of e-cigarette liquid studied were dangerous, regardless of nicotine level. In addition to endothelial cell damage and death, each e-liquid flavor studied decreased the ability of the cells to help the body heal wounds.

Even varying nicotine levels didn’t impact the negative impacts that the study found. “When we exposed the cells to six different flavors of e-liquid with varying levels of nicotine,” Dr. Wu said, “we saw significant damage. The cells were less viable in culture, and they began to exhibit multiple symptoms of dysfunction.” These symptoms of dysfunction, outside of a lab and inside a human being, can lead to serious declines in cardiovascular health. This is because endothelial cells are crucial to successful blood flow: given that they line the inside of blood vessels, blood can’t flow properly without thriving endothelial cells. Without that proper blood flow, people’s risk of developing heart disease can skyrocket.

While the risks of e-cigarette use have been known for some time, this study is the first to look specifically at flavored e-liquid’s impact on endothelial cells. While lab-grown cells are not the same as human cells, this remains the first study of its kind to study this particular e-cigarette-cell dynamic. And though this study will add to the growing literature about e-cigarette risks, it might not change youth perceptions of e-cigarettes. Indeed, a 2016 study published in the Journal of Adolescent Health suggested that 10% of U.S. students in grades six through 12 believe that e-cigarettes cause no harm. The study also suggested that 62% of students surveyed believe that e-cigarettes only cause a little or some harm.

A rise in e-cigarette advertising has included campaigns to increase the diversity of appealing flavored e-liquids available on the market. (Flavored e-liquids in e-cigarettes were introduced as the result of a loophole in the 2009 Family Smoking Prevention and Tobacco Control Act, which bans the use of non-menthol flavors in cigarettes. Other forms of tobacco, however, can be flavored, which many e-cig companies do.) It’s perhaps not surprising, then, to see this rise in e-cigarette use. But this Stanford study provides more valuable perspective on the dangers of this precise rise in the use of flavored e-cigarettes.