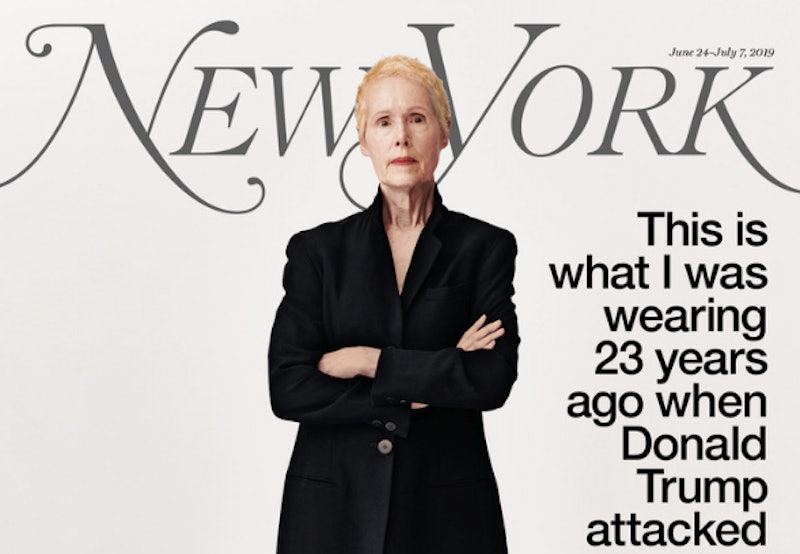 On Friday, a famed advice columnist published a harrowing account of all the "hideous men" she's encountered in her life in New York Magazine, and the president is at the top of the list. In the vivid essay, E. Jean Carroll accuses Donald Trump of sexually assaulting her in a Bergdorf Goodman dressing room decades ago.

During Fall 1995 or Spring 1996, Carroll writes, Trump recognized her as "that advice lady" as she was walking into the department store. She recalls that, at one point, Trump asked her to try on lingerie and she joked that he should try it on instead.

"The moment the dressing-room door is closed, he lunges at me, pushes me against the wall, hitting my head quite badly, and puts his mouth against my lips," she writes, describing what allegedly happened after they entered the dressing room. She claims he then pinned her up against the wall and pulled down her tights.

"The next moment, still wearing correct business attire, shirt, tie, suit jacket, overcoat, he opens the overcoat, unzips his pants, and, forcing his fingers around my private area, thrusts his penis halfway — or completely, I’m not certain — inside me," she alleges. "It turns into a colossal struggle." She writes she was eventually able to push him away and run out of the dressing room.

Bustle has reached out to the White House for comment on Carroll's account. The White House denied the allegations in a statement to New York: “This is a completely false and unrealistic story surfacing 25 years after allegedly taking place and was created simply to make the President look bad.”

Though Carroll does not use any particular term to characterize what allegedly happened in that dressing room, her account fits the definition of rape (the headline on the essay reads "Donald Trump assaulted me in a Bergdorf Goodman dressing room 23 years ago"). Merriam-Webster defines rape, in part, as "unlawful sexual activity and usually sexual intercourse carried out forcibly or under threat of injury against a person's will ... " Carroll writes that after Trump allegedly penetrated her, it was a "struggle" as she tried to stomp on his foot and push him away. The clear implication here is that the alleged penetration was forced.

Carroll also describes how one of her close friends responded to the alleged assault when she shared her story right after it happened. According to Carroll, her friend said, “He raped you," and insisted that they go to the police.

Before describing her own alleged experience with the president, Carroll acknowledges that these allegations against Trump are part of a bigger picture — a trend. She writes, "The man I will be talking about denies it, as he has denied accusations of sexual misconduct made by at least 15 credible women." She then goes on to name each of those women.

Carroll makes it clear that she did not go to the police after the alleged assault happened, and goes on to explain why she didn't come forward earlier. "Receiving death threats, being driven from my home, being dismissed, being dragged through the mud, and joining the 15 women who’ve come forward with credible stories about how the man grabbed, badgered, belittled, mauled, molested, and assaulted them, only to see the man turn it around, deny, threaten, and attack them, never sounded like much fun," she writes, in reference to what other accusers have had to face. The advice columnist calls herself a "coward" for not telling her story sooner. But clearly, the risks that come along with making allegations against powerful men are significant.

In the essay's closing paragraph, Carroll emphasizes, "And that was my last hideous man," referring to Trump. And in the cover photo, she's wearing the same black wool Donna Karan coatdress she did on that day 23 years ago.