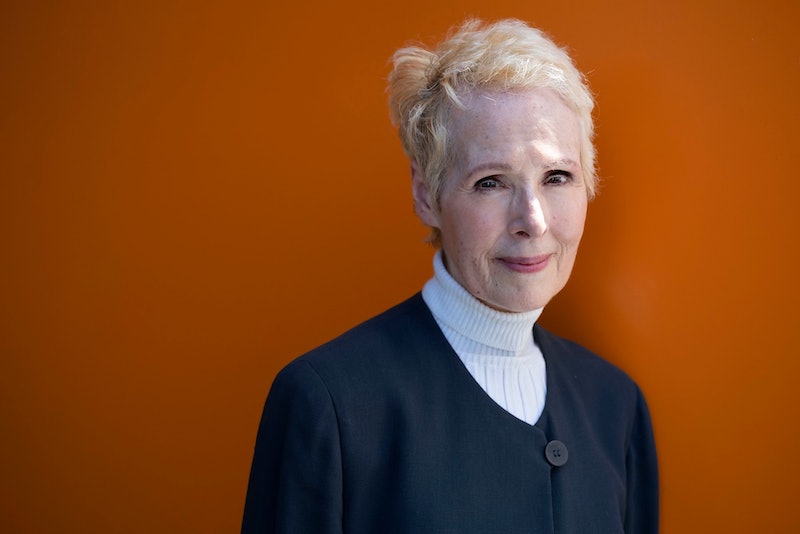 With her new memoir, What Do We Need Men For?, E. Jean Carroll has written one of the definitive books of the #MeToo movement. Deep within the memoir, 11 pages contain Carroll’s now-famous allegation that President Donald Trump sexually assaulted her in 1996. But that story, first published by New York Magazine two weeks prior to the book’s release, is just one hit in a scourge of attacks. A broader cultural message exists in these 270 pages, in which Carroll writes about her 60 years of experience with what she calls "hideous men," including a babysitter’s boyfriend, a camp waterfront director, a mobster, two media moguls, an auto mechanic, random hostile strangers, and a celebrity ex-husband. Carroll herself earns a spot on the list of "hideous" people. The charge? Seducing one of her college professors. "I don greaser shades and a trench coat, and, with nothing on underneath except my yellow bikini, I crash one of his lectures," she writes.

This is a woman aware of her desirability. She is fierce, adventurous, an active player in her life. She refuses the victim role, both in the book and in subsequent interviews, asserting in the epilogue, "…these events are nothing compared to the experiences of many women who have survived much, much more." Carroll contends that her encounter with Trump was a fight. As elegantly scribed by Dahlia Lithwick for Slate, "Having seen the parade of perfect, flawless, pain-wracked, somber victims dismissed for being not, well, not something enough to be taken seriously, E. Jean Carroll opts to reinvent victimhood on her own terms; she doesn’t take herself fully seriously."

"I think it’s been difficult for people to listen to my story because it makes them feel hopeless."

A seasoned journalist and book author, the intimate biographer of Hunter S. Thompson, a Miss Cheerleader USA and Miss Indiana University, an Indie 500 Princess, host of her own TV talk show, and America’s longest-running advice columnist, E. Jean Carroll is accustomed to attention. She is inarguably stylish, vivacious, and at 76, usually the most captivating person in the room. I have been her friend for 18 years, and I know her magic well.

So when her allegation against Trump landed, and a slew of high-profile interviews followed, I was first stunned by the news, then shocked at the lack of public outrage. I had been eagerly awaiting the launch of the book, though I knew nothing of the most high profile disclosure within it. I knew about the road trip E. Jean Carroll had taken with Lewis, her giant blue-haired poodle, in preparation to write a book about whether or not women "need" men. I knew about her ever-expanding list of Hideous Men. The combined project sounded like a fun-fueled feminist response to the current cultural and political climate, and I expected to laugh my way through its pages. I wasn’t wrong about the laughter; there is much humor to be found within the book. But the subdued response to Carroll’s allegations against Trump was baffling.

"I think it’s been difficult for people to listen to my story because it makes them feel hopeless,” Carroll tells me. "They feel bad because they know they can’t do anything. Nothing’s ever been done about this guy. People feel like they want to turn away, but they’re embarrassed to turn away. They can say they love me and they support me, and that’s about all they can do. I’m a member of a strange sorority of 22 women,” she says, referencing the 21 other women who have accused President Trump of sexual misconduct, including reporter and author Natasha Stoynoff, two Miss Teen USA contestants, and several women who knew him socially.

Carroll is the most well-known person on the list, and the first to publicly accuse Trump of an assault that meets the legal definition of rape. According to the Rape, Abuse & Incest National Network (RAINN), just 23% of rapes are reported, only 4.6% lead to arrests, and a shockingly low 0.5% of cases result in a conviction. Yet, people harp on victims who are unwilling to come forward. But when victims do come forward, do people with the power to make a difference actually listen? In the case of Carroll, and with the women before her, the answer is no. As Moira Donegon wrote in The Atlantic, "The accusation landed with a thud in the media, briefly disturbing the public conversation one sunny Friday afternoon the way a spilled glass of wine momentarily disturbs a dinner party."

Carroll isn't a "perfect victim." My own theory leans on the Wild Woman trope: Wild women are disobedient, anti-establishment know-it-alls, and empowered, rule-breaking women are threatening. Particularly women like Carroll, who traversed the misogynist workplace bog of the 1950s, and managed to carve out brilliant careers in male-dominated fields with her sense of humor intact. It's that sense of humor that's given license to some people to not take her seriously.

'What Do We Need Men For? A Modest Proposal' by E. Jean Carroll

At the heart of What Do We Need Men For? is an examination of the historical pattern of violence against women, as well the silence around it. I tell Carroll about my own experiences as a young woman living in Manhattan and the Bronx. I was barraged with unwanted, degrading, and belittling verbal assaults.

"That is a grind," Carroll says. "The whistles and catcalling, remarks about whether they like what you’re wearing, whether you’re smiling or not. 'You look very f*ckable!' It can damage a woman’s soul."

In response to my experiences and her experiences and the experiences of most women, Carroll has devised two modest proposals: One, dissect men down to their chemical elements and sell them for parts, which she jokingly estimates would net $1.09 per guy. Two, cordon all men in a State of Containment, ideally Montana, and retrain them all, with the help of robotrixes, over a five year period. That’s enough time for women to take over, she reasons.

"If we just don’t destroy the world in the next two or three years, the next generation is going to be wonderful."

The narrative of the book switches between travel diary and memoir, with flashbacks triggered by recent encounters. Within the road trip spine of the book, a swath of potent characters, from many walks of life, each dish a signature motto on the omnipotence and the impotence of men. But the real standouts are the quietly strong, shrewd, resilient, "well-behaved" women and gender non-binary individuals whom E. Jean meets in her travels. There’s Carla (not her real name), who stoically admits to hitting men back. There are Hoosier moms in baggie sweatshirts defiantly charting cheating husbands and cancer treatments. A petite Black college student working a Mississippi gun show asserts that as long as you carry a stun gun, you don’t need men for anything. And a Kentucky woman admits she basically needs her man to fix her car.

My personal favorites are a pair of non-binary undergrads at Oberlin College, whose jarring modernity serves to represent a brighter future, as in the future is already here. Carroll’s putting all of her hope eggs in that basket.

"I loved those Oberlin kids," she tells me. "They were super smart. If we just don’t destroy the world in the next two or three years, the next generation is going to be wonderful. We’ve got too many of these old guys doing bad stuff, and we’re just going to have to wait for them to die off."

But Carroll is not the type to sit around and wait. She corrects herself.

"We’re going to Montana! You’ll help me," she says. And I picture us blazing across the Midwest in the ultimate Thelma and Louise revival, primed to dismantle the patriarchy with the teachings of one modest proposal. "I will! Sign me up! Give me a clipboard!" I holler.

Because if Carroll is serious about reprogramming society, her book is the perfect tool.

Carroll tells me she’s happy in her little cocoon of love, a.k.a. her tiny cottage in the Wawayanda Mountains, in the excellent company of Vagina T. Fireball the cat, Guffington Von Fluke the dog (her poodle, Lewis, passed away), and a loaded gun on the nightstand. The bullets are new, a response to the barrage of hateful spew she’s endured since the media frenzy around her Trump disclosure. She tells me that a close friend on Facebook’s Anti-Harassment squad offered to set up protective walls on her accounts, but she prefers to see the enemy and battle on.

As for Trump, she says, "I’m just gonna go on! I’m gonna fight this guy. I’m not gonna take it lying down. Put it that way. Because I don’t like that I’m making people feel embarrassed and helpless."

The section of the book in which she details her accusations against Trump is only 11 pages long. And while those pages are critical to his story, the full saga of What Do We Need Men For? holds the real power for Carroll. In writing a memoir that moves far beyond the theoretical, Carroll has created a personal narrative primed to shift people’s understanding, and ultimately, their behavior. Books like this one shape history. But only if people listen.

More like this
16 Novels That Paint A Realistic Portrait Of Abortion
By K.W. Colyard
How To Fight For Reproductive Rights, Based On How Much Time You Have
By Courtney Young
Lauren Rae Is Bringing Back The Sex And The City Vibes In Her New Memoir
By Shahed Ezaydi
Annie Lord’s Memoir Will Make You Believe In Love Again
By Shahed Ezaydi
Get Even More From Bustle — Sign Up For The Newsletter