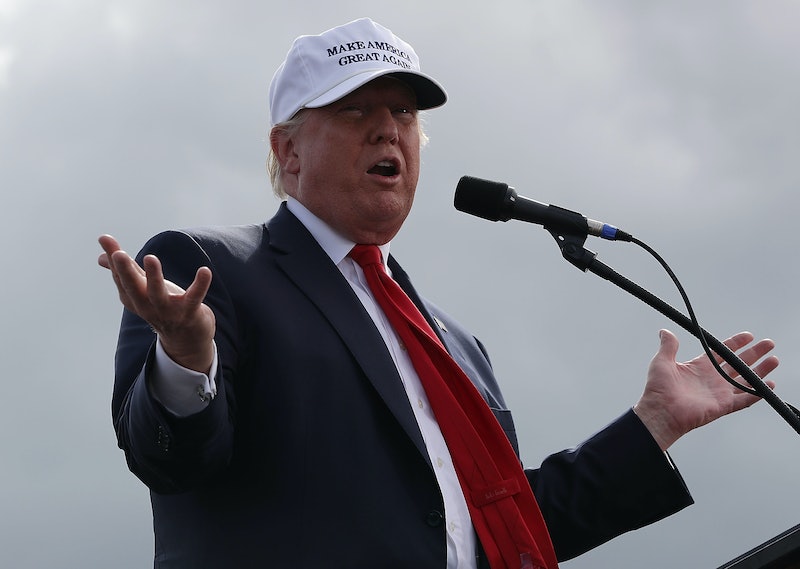 On Wednesday, The New York Times released a report in which two women alleged that Donald Trump had touched them inappropriately. Trump and his lawyer denied the allegations, but he soon faced more: It wasn't even 24 hours later before the first alleged victims were joined by another woman. So, who is Natasha Styonoff? She is a former writer for People magazine who interviewed Trump back in the early 2000s, and just hours after the Times story was released, Styonoff wrote a piece for People.com that also alleged inappropriate sexual conduct by the GOP presidential nominee.

In the article, "Physically Attacked by Donald Trump — a PEOPLE Writer's Own Harrowing Story," Styonoff detailed her own experience with sexual assault. A Trump spokeswoman has denied the facts of this piece: "This never happened. There is no merit or veracity to this fabricated story," she told People. But after the debate Sunday, Styonoff decided she needed to tell her version of the events.

Styonoff was sent to Trump's resort in Mar-a-Lago to interview Trump on the one year anniversary of his marriage, she said. This was the norm for her reporting, as she had covered his wedding, The Apprentice, and all things Trump up until that point. Thus, Styonoff claimed they had a friendly, professional relationship, and the interview was going quite well.

She was there with People photographers who captured Melania's pregnancy. At one point, the mother-to-be went upstairs to change. Trump, she alleges, told her she had to see one "tremendous" room. It's what happened next that's so potentially shocking:

We walked into that room alone, and Trump shut the door behind us. I turned around, and within seconds he was pushing me against the wall and forcing his tongue down my throat.

Styonoff claims Trump leaned over and told her, "'You know we're going to have an affair, don't you?' ... in the same confident tone he uses when he says he's going to make America great again," she explained in her article.

Once again, it's necessary to note that the Trump camp denies this. Trump and Co. released a longer statement to the magazine:

This never happened. There is no merit or veracity to this fictional story. Why wasn't this reported at the time? Mr. Trump was the biggest star on television and surely this would have been a far bigger scoop for People magazine. She alleges this took place in a public space with people around. This is nothing but politically motivated fictional pile-on.

But one of the most interesting parts of her reflection now is what she describes as not to say anything at the time. That might be a critique from the Trump camp, but the experience is also what so many victims of sexual assault go through.

But, like many women, I was ashamed and blamed myself for his transgression. I minimized it ("It's not like he raped me..."); I doubted my recollection and my reaction. I was afraid that a famous, powerful, wealthy man could and would discredit and destroy me, especially if I got his coveted PEOPLE feature killed.

"Now he's running for president of our country. The other day, I listened to him talk about how he treats women on the Access Hollywood tape. I felt a strong mix of emotions, but shock wasn't one of them," Styonoff writes. "I was relieved. I finally understood for sure that I was not to blame for his inappropriate behavior. I had not been singled out. As he explained to Billy Bush, it was his usual modus operandi with women."

Now she wants the world to know that, according to her story, Trump's talk is also action.