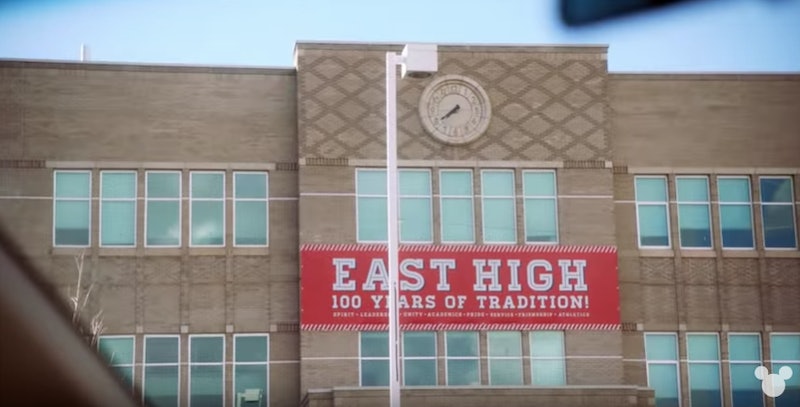 In real life, East High School has become quite the tourist destination. School administrators told The Deseret News that in 2007, a year after the first HSM movie was released, 40 to 50 people were dropping by daily — much to the students' chagrin.

"So many people coming here and taking pictures. It kind of gets annoying after a while," Amber Lee, then a senior and drama club president, told the outlet at the time. The school's principal Paul Sagers, however, saw the bright side. "It's quite the buzz. The traffic has been unbelievable," he said, adding that the school's Parent Teacher Association was taking advantage of the attention by selling East High t-shirts. Later that year, East's own stage production of High School Musical debuted to a sold-out audience.

Today, dozens of fan-led tours through the high school can be found on YouTube, including the iconic cafeteria where multiple dance numbers took place, the gym where Troy got his head in the game, and the classrooms where students counted down to summer. When the High School Musical: The Musical: The Series cast learned that they, too, would film in the building, they were ecstatic.

"It was a dream filming at East High," Sofia Wylie, who plays Gina Porter on the show, told SpoilerTV. "That was actually one of the first days that I filmed and I had never been inside ... right before I walked in I was just so overwhelmed. I was like, 'My life is beginning.' It was the craziest moment."

Wylie's co-star Matt Cornett, who plays E.J., had similar feelings. "My first scene that I filmed was in the cafeteria, very first shot," he told SpoilerTV. "I didn't know it was possible to be starstruck by a building. But I was."

More like this
Rupert Grint Just Shared A *Major* Update About Ron Weasley’s Future
By El Hunt
'Abbott Elementary' Fans Probably Missed This 'Parent Trap' Easter Egg
By Sam Ramsden
At 28, Rosie Perez Risked Her Career To Stop Playing Stereotypes
By Gabrielle Bondi
Here’s Everything Coming To & Leaving Netflix In February
By Jake Viswanath
Get Even More From Bustle — Sign Up For The Newsletter
From hair trends to relationship advice, our daily newsletter has everything you need to sound like a person who’s on TikTok, even if you aren’t.