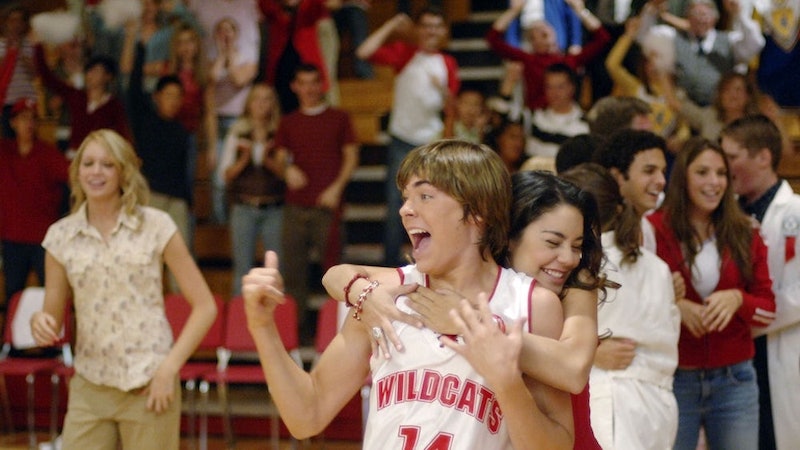 Disney definitely has their head in the game when it comes to the new High School Musical TV show cast. The company's newest follow up to the hit Disney Channel Original Movie just announced their new cast and characters, and let's just say, Troy Bolton should be shaking in his letterman jacket.

High School Musical: The Musical: The Series has officially started production, according to a press release obtained by Bustle. The show, which is being shot in Salt Lake City, Utah, will follow students of East High (yes, it really exists) as they attempt to put on their first High School Musical production. But don't worry, the show won't just be about a bunch of kids trying to nail the high notes in "Breaking Free." The press release teased that "show-mances blossom; friendships are tested while new ones are made; rivalries flare; and lives are changed forever as these young people discover the transformative power that only a high school drama club can provide."

So, to clarify, the show will follow a group of fictional teenagers who are putting on a production based on the the DCOM at a high school in Utah. Disney also promised that the new show would feature both "acoustic 'rehearsal-room reinterpretations" of beloved HSM classics, but also brand new songs. Think Glee, but with a High School Musical spin.

The 10-episode series previously announced the casting of it's lead, Joshua Bassett, but now that more actors have been cast, Disney+ has released the first official photo of the High School Musical: The Musical: The Series main cast.

Now, because High School Musical: The Musical isn't actually based on High School Musical the movie, it will feature an entire new group of characters. But that doesn't mean they won't share some resemblance to the original gang. For example, the first actor cast, Joshua Bassett, is playing Ricky, described by Disney+ as a "sarcastic yet charismatic skate rat" who auditions to star in the musical to impress his ex-girlfriend. It's not exactly basketball-player-turned-musical-star Troy Bolton, but we'll take it.

The ex-girlfriend Ricky is so desperate to impress is Nini, who will be played by Olivia Rodrigo (Bizaardvark). Nini is back from summer camp with a brand new confidence and a brand new boyfriend, but she still suffers from self-doubt, and it could cause her to loose faith in herself and the musical. And, weaving the complicated web even further, is Matt Cornett's E.J. Described as a "supremely confident son of two corporate lawyers," E.J. is Nini's new boyfriend. He's a guy who is used to getting what he wants, including lead roles.

Dara Renee, who recently starred in Disney Channel's Freaky Friday remake, will star as Kourtney, Nini's best friend. Kourtney is described as a feminist "obsessed with makeup tutorials" and does the costumes for the musical. Also working behind-the-scenes will be Carlos, played by Frankie A. Rodriguez. Carlos is the student choreographer who has his eyes on Broadway.

Like Carlos, Sofia Wylie's Gina has her eyes on the prize. She's a new kid at school who loves theater and expects to be the star. She's upset when Miss Jenn (played by Broadway vet Kate Reinders) casts her as the understudy, and, according to Disney+ has "as many skeletons in the closet as she has credits on her résumé."

Rounding out the group will be Larry Saperstein's Big Red, a skater who used to be best friends with Nini and Ricky, and Mr Mazzara, played by Mark St. Cyr, the science teacher.