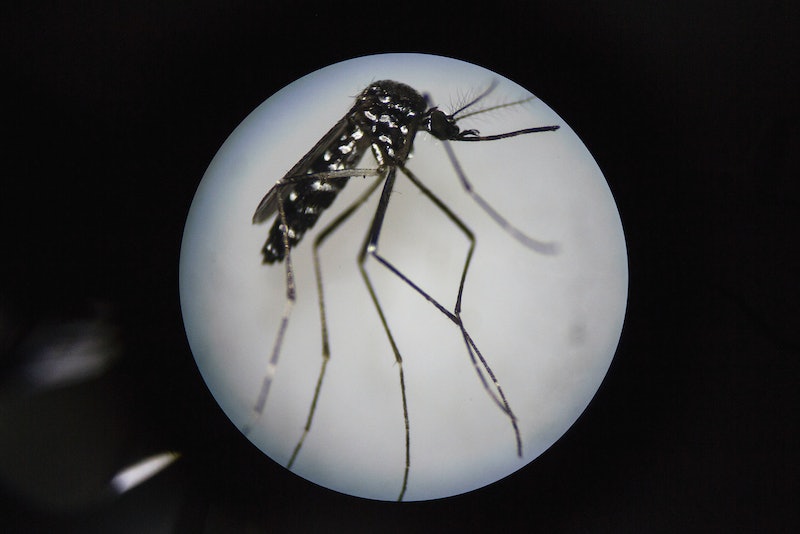 Anyone who's ever been bitten by a mosquito knows the bites can leave your skin full of itchy welts. But you might not know that mosquitos can also transmit a deadly viruses called eastern equine encephalitis, which causes the brain to swell. The Connecticut State Department of Public Health issued a statement on Sept. 20 reporting that two people had been diagnosed with EEE, and one of them has died.

"The identification of two Connecticut residents with EEE, one of whom has passed away, emphasizes the seriousness of this infection," DPH Commissioner Renée Coleman Mitchell said. "Using insect repellent, covering bare skin, and avoiding being outdoors from dusk to dawn are effective ways to help keep you from being bitten by mosquitoes. Mosquitoes continue to be active until the first heavy frost."

In addition to Connecticut, Massachusetts reported 10 confirmed cases of EEE and two deaths, Michigan reported three EEE-related fatalities, and Rhode Island reported one. According to a map from the U.S. Centers for Disease Control and Prevention, people living in eastern, southern, and some midwestern states, as well Montana, are at risk. And while the disease is rare, 2019 has spawned a record number of infections.

According to the CDC, the virus can cause two types of illnesses, systemic and encephalitic, known as EEE. Symptoms of systemic infection include chills, fever, malaise, joint pain, and muscle pain. This illness lasts one to two weeks and has no lasting effects. The encephalitic form of the virus, EEE, includes symptoms like fever, headache, irritability, restlessness, drowsiness, vomiting, diarrhea, bluish skin, convulsions, and coma. According to the CDC, there is no specific treatment, and one-third of people who contract this form of the virus die from the disease within 10 days after the onset of symptoms. Survivors may be left permanently disabled. The CDC reported that the incubation period for eastern equine encephalitis virus (EEE) is four to 10 days. This means if you do contract the virus, you may start to experience symptoms as soon as four days after being bitten by a mosquito.

While this all sounds scary, the disease is very rare — TODAY reported that there were just six cases reported last year — and the CDC noted that some people who are infected with the virus won't develop any symptoms at all.

Joe Conlon, retired U.S. Navy entomologist and spokesman for the American Mosquito Control Association, told TODAY that although climate change is partly to blame for the increase in EEE cases, other factors like pesticide bans and increased international travel also play a role.

The best way to protect yourself from EEE is to avoid places where you're likely to be exposed to mosquitos. The Connecticut Department of Health advised against "unnecessary trips into mosquito breeding grounds and marshes" adding that "the mosquitoes that transmit EEE virus are associated with freshwater swamps and are most active at dusk and dawn."

In addition, avoid letting standing water accumulate around your home, wear insect repellant, and cover bare skin when going outside. If you do experience any of the aforementioned symptoms, seek medical attention as soon as you can.