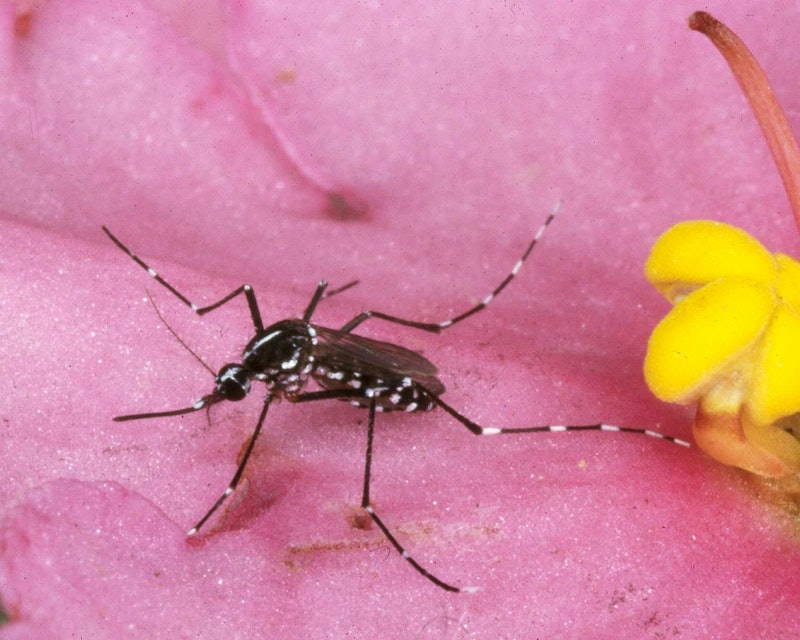 It's always nice to be well-liked — with a few exceptions. Most people are more than happy to be unpopular with serial killers, rodents, and bugs. But, despite emitting stay-away-from-me vibes, some people get bitten by mosquitoes more than others. As it turns out, your body could be giving off cues (without your knowledge) that you're an attractive blood meal, according to research from Professor Leslie Vosshall and her colleagues at the Rockefeller University of New York, Technology Networks reported.

"We attract mosquitoes via multiple sensory cues including emitted body odor from lactic acid, heat and carbon dioxide in our breath, and mosquitoes can sense differences between these cues to determine which animal or human to target for blood-feeding," she explained. This means that if your bestie leaves a backyard barbecue bite-free but you leave covered in itchy red welts, mosquitoes might be attracted to your unique body odor.

NBC News reported that Jonathan Day, professor of medical entomology at the University of Florida in Vero Beach, said that 20 percent of people get more mosquito bites than the general population, and people who produce more carbon dioxide, like pregnant women, are more likely to be attractive to mosquitoes.

"Lactic acid (given off while exercising), acetone (a chemical released in your breath), and estradiol (a breakdown product of estrogen) can all be released at varying concentrations and lure in mosquitoes. Your body temperature, or warmth, can also make a difference. Mosquitoes may flock to pregnant women because of their extra body heat," Cari Neirenberg reported for NBC News in an interview with Day.

Day also told TIME magazine that drinking alcohol can raise your metabolic rate, which in turns increases the amount of carbon dioxide you emit. This combination makes you attractive to mosquitoes. In addition to smell, the color of your clothes also play a role in whether or not mosquitoes will seek you out for their dinner. If you regularly dress in black, red, or navy blue, you're more attractive to mosquitoes because the pests are better able to see your silhouette and zero in on you.

What's more, a study published in the Journal of Medical Entomology found that people with type O blood are more likely to get bitten by mosquitoes than those with type A or B blood. Basically, a lot of things go into a mosquito's decision to bite you, and some of them — like your blood type — are out of your control.

If all this weren't bad enough, research published in Scientific Reports noted that mosquitoes are more likely to bite you when they're dehydrated. So, if you venture out for a hike in a remote area where mosquitoes haven't been able to find enough water to quench their thirst, you're more likely to become their meal no matter what you're wearing or how you smell.

According to the study, mosquitoes that had been deprived of water for just a few hours were much more likely to bite people than those with consistent access to water. While all of this new research increases our understanding of mosquito behavior, scientists are still no closer to knowing how to prevent you from getting bitten by mosquitoes entirely.

Wearing a bug repellant that contains DEET can help, but if you want to go all-natch, a number of essential oils can reduce your chances of becoming an unwilling target for these insect vampires. Healthline reported that essential oils like lavender, tea tree, Greek catnip, thyme, soybean, citronella, eucalyptus, and neem can help keep those pesky bugs off of your body. Dilute the oil of your choice in water and put the mixture into a little spray bottle you can carry in your bag.

You can also opt for light clothing and avoid alcohol and rigorous exercise if you know you're venturing into a mosquito-heavy area. When it comes to battling mosquitos, the old adage an ounce of prevention is worth a pound of cure can save you from a summer of scratching. Because, you've got things to do, and your plans likely don't include staying indoors nursing a body covered in itchy red welts.