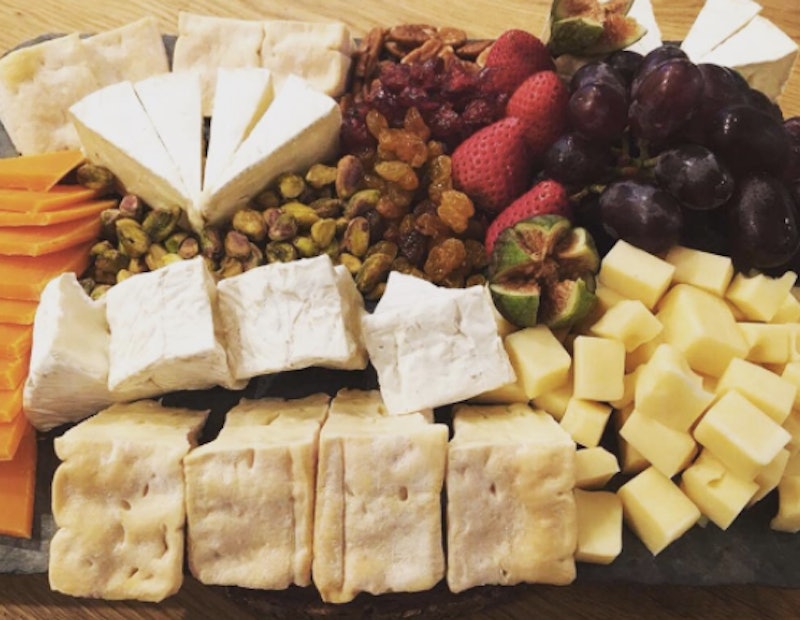 Despite how fancy the term "cheese board" sounds, you don't have to be a cheese scholar or a Martha Stewart disciple to master your own — they're a lot easier than they look! That said, if you're a cheese lover and you haven't been to the French Cheese Board in New York City, you are seriously missing out. Not only does the store sell a variety of highly curated cheeses, but it also serves as an educational space for the cheese curious. They offer classes, lectures, tastings, and serve as both a low-key cheese museum and culinary institution — so, in other words, it offers a wealth of knowledge about how to being a cheese board master in no time.

But, if you don't have access to their New York space, you can still reap the benefits of their cheesy intel! Charles Duque, the managing director of French Cheese Board and member of the French Dairy Board, was kind enough to share some crucial cheese board tips and tricks with Bustle readers, in honor, of course, of National Cheese Day on June 4. Because cheese consumption is such a historic tradition among lactose-tolerant humans, there's an art to doing it the right way.

Thanks to Mr. Duque, here are some suggestions and tips for how to put together the perfect cheese board that's balanced, tasty, and very aesthetically appealing:

According to Duque, there's a right way and a wrong way to cut cheese and it's not what you'd expect.

There are lots of different kinds of knives meant for cutting cheese. If you're in the market to stock up on a few knives, you'll need:

Often, you can find these sold in sets — like the set you see above from Made In Design!

Why? Because while it might not even be visible, residue from the cheese will stick to the knife — and when you use that same knife to cut into another cheese, you will add one cheese's flavor to the other. While that might sound harmless, it has the potential to overwhelm any one cheese's entirely, and that can mess up flavoring if you're jumping from a mild cheese like a Camembert to a pungent one like a Roquefort. So your best best is to use a different or clean knife between each cheese.

Present Your Cheeses In Order From Mild To Stinky

While you should feel free to get creative here, there are a few basic rules that will guarantee excellence, according to Duque:

If need be, you can add some honey to your stinkiest cheeses to lighten the flavor. If your blue cheese is too pungent for you or your guests, put a few drops of honey on it. That will cut the stench and make anyone who's anti-blue cheese a fan. According to Duque, it completely changes the flavor of the cheese!

According to Duque, adding dried fruits like figs, apricots, raisins and blackberries will also add a hint of sweetness and beauty to the board. Sprinkle in some nuts for texture and broken bits of crackers to help break up the flavors. Add in meats and vegetables, whatever your heart desires!