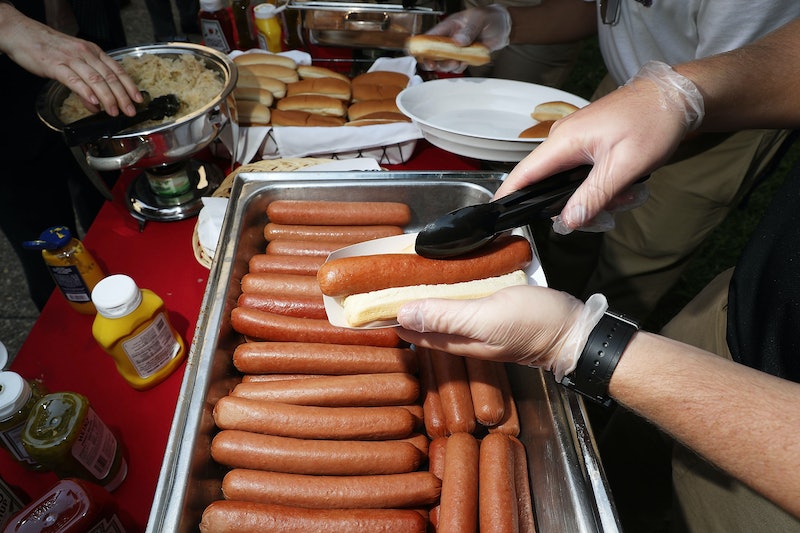 A new study in the International Journal of Cancer has found eating processed meat was linked to an increased risk of breast cancer, The New York Times reports. This means foods like hot dogs, bacon, sausages, or salami — foods that have been modified so they don’t go bad as fast or so they taste different because they’ve been smoked, cured, salted or had preservatives added to them, BBC News says. But before you give up Chicago style ‘dogs for good, there are a few important caveats to the study that you should know first.

But the researchers also acknowledge that these are simply observational studies, says BBC News, so they don’t control for any other risk factors, such as the participants’ activity levels, other foods they may have eaten, or other substances they might have consumed. And 15 of the 16 studies used different definitions for what the “highest” consumption of processed meats was, according to BBC News. In other words, says BBC News, the researchers aren’t completely certain if it was the processed meats that caused the participants to develop breast cancer.

Kevin McConway, emeritus professor of applied statistics at the UK’s Open University, told CNN that the study doesn’t actually show that eating more processed meat leads directly to breast cancer. “I just can’t tell you how many more cases of breast cancer there would be if everyone ate an extra bacon sandwich a day — this research just can’t give that information,” McConway told CNN.

So are processed meats out? Not necessarily. Dr. Farvid told BBC News that she recommends simply cutting down on processed meats rather than eliminating them completely. But Dr. Gunter Kuhnle, associate professor of nutrition and health at the University of Reading, who was not involved in the study, told BBC News he wasn’t convinced people should make any changes based on the results of this study. Dr. Kuhnle told BBC News that, based on this study’s findings, the actual risk of developing breast cancer is too small on the individual level to warrant cutting back on processed meats. But, Dr. Kuhnle said, the study's findings were revealing enough to warrant further investigation into whether there really is a link between processed meat and breast cancer.

In other words, the study showed there might be a link between breast cancer and processed meat, but researchers have more work to do to really show that link exists. Until then, it's up to you whether foods like hotdogs and chorizo are a part of your life.