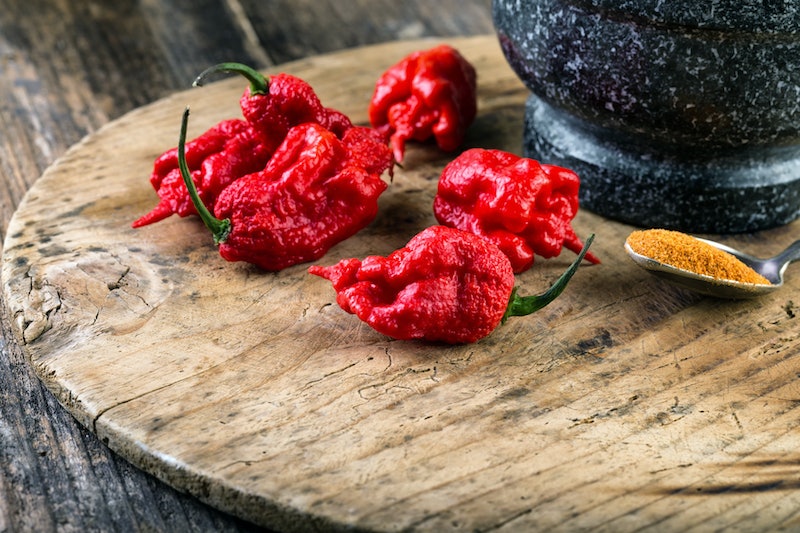 Challenges naturally pose obstacles, but they're ultimately supposed to be fun. Right? Not always. At least when it comes to hot pepper eating challenges. According to a recent case report, eating the world's hottest pepper gave a man "thunderclap" headaches, The New York Times reported. If the word migraine haunts you, a thunderclap headache sounds like the fiery wrath of a Greek God. Though rare, the severe headache does exist. And one man was unfortunate enough to experience it at the hand of the world's hottest pepper, the Chelsea Reaper.

Hot peppers electrify dishes. They perch atop tacos to elevate each bite, sparking controlled fires in all the corners of your mouth. It's an enjoyable pain when exercised in doses. When done right, a little bit of spice typically doesn't lead to the emergency room. But each person is unique. And so each person has their own level of tolerance when it comes to the kind of hot peppers that fall somewhere high on the Scoville scale.

For those who aren't into hot peppers, the Scoville scale measures how much heat a pepper produces in your mouth. This can range from "shoulder shrug" to "is there such thing as a fire extinguisher for your mouth" numerical units. The heat of a pepper can be attributed to a compound called capsaicin. You won't be tested on this later, but it's good to know. It's also maybe even the reason why this hot pepper eating man suffered a headache so bad they call it a thunderclap.

According to Pepper Scale, the Carolina Reaper has been the hottest pepper in the world since the Guinness Book of World Records bestowed the title upon the pepper in 2013. The naturally shriveled pepper looks no bigger than a crab apple, but it packs a heat underestimated by its coy, red appearance — no more vibrant than a casual red bell pepper. Yet, the pepper packs 1,400,000 to 2,200,000 heat units on the Scoville scale. The numbers alone awake a tingly sensation on my tongue. But that didn't stop a 34-year-old man from putting one in his mouth. And then chewing on it.

The New York Times reports, "He immediately started experiencing dry heaves — not unknown in the hot-pepper-eating world. But then a pain in his neck and head came on." Once the pain persisted he decided it would be a good idea to go to the doctor. Milk, it turns out, will not band aid the pain of a very, extremely hot pepper.

There are headaches and then there are migraines. Then there are thunderclap headaches. The American Migraine Foundation says, "Thunderclap headaches are severe headaches coming on full force in less than a minute, lasting at least 5 minutes, and often appearing without any trigger." And now my head will throb with the fear of being cursed with such a venomous headache. But besides being terrifying, this severe headache is indicative of something more serious — it could be caused by a stroke or blood vessel tear.

BMJ Case Reports published the medical report of the man who swallowed the hottest pepper. But in the case of the pepper eater, "CT angiography revealed no aneurysm but demonstrated unexpected multifocal luminal narrowing in the left supraclinoid internal carotid artery, M1 segment of bilateral middle cerebral arteries, and P1 segments of bilateral posterior cerebral arteries consistent with vasospasm." The doctors concluded that this thunderclap headache was most likely caused by reversible cerebral vasoconstriction syndrome (RCVS).

In I-didn't-go-to-medical-school words, this means that a blood vessel around the brain had a spasm. It's typically caused by medications or drugs and is not so easy to diagnose. But in this case, the pepper is what might have "offended" the man's blood vessels leading to the harrowing headache. Just in case you have a sensitivity to capsaicin, it might be wise to avoid body scorching peppers. You wouldn't want to learn this the hard way. I'll stick to jalapeño peppers for now, thank you.