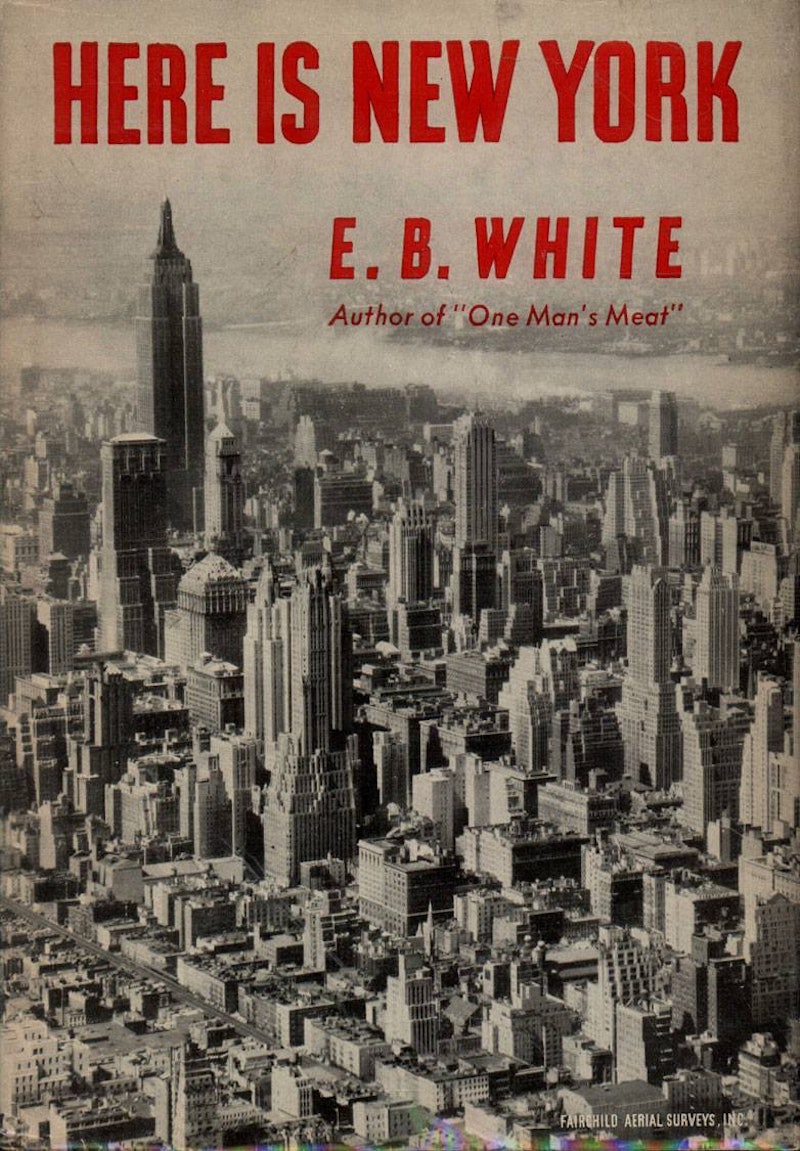 Much has been written on the city of New York. It's the eternal backdrop for rom-coms and financial thrillers, the source of Harlem Renaissance poetry and meandering web-series set in Brooklyn. An endless sea of books, films, and blogs have put forth their opinions on the city, each as contradictory and final as the next (it's overrated, lonely, overcrowded, beautiful, dirty, loud, magnificent, and the damned trains don't work). But if there is an apotheosis of writing on the apotheosis of cities, it has to be E.B. White's aptly titled essay-turned-book Here Is New York.

E.B. White is best known today for his children's books, Charlotte's Web, Stuart Little, and The Trumpet of the Swan, or for his writing style guide, The Elements of Style (he's the "White" in "Strunk & White"). He was also an essayist for The New Yorker and other publications for over fifty years, and "Here Is New York" might be his most celebrated essay. It's a straightforward stroll through the streets of Manhattan, the quintessential love letter to New York and New Yorkers. And, despite being published in 1948, it might be one of the most haunting pieces of post 9/11 literature ever written.

New York has changed since 1949, of course. America has changed. But to read "Here Is New York" today, it's impossible to shake the vague feeling that E.B. White was some kind of oracle, that he knew precisely which parts of the city would flourish, which would disappear, and how it might feel to live in New York in 2018, under the existential threat of war.

White's essay begins by getting straight to the heart of New York's character:

On any person who desires such queer prizes, New York will bestow the gift of loneliness and the gift of privacy.

It's not quite that simple, of course. White understands that New York is made up of a latticework of neighborhoods, interwoven pockets of community, and that New Yorkers are not really the cold-hearted creatures that slow walking tourists might see them as.

At the same time, though, White revels in New York's ability to cram in several million people and maintain an air of perfect solitude. There is spectacle and excitement if one wants spectacle and excitement, but every event is optional (with the exception, according to White, of the St. Patrick's Day parade, which "hits every New Yorker on the head").

He also understands that there is no single New York, but rather a number of different, overlapping cities, depending on who's looking:

All of these conflicting New Yorks manage to meld and coexist, however, in a city that "has been compelled to expand skyward because of the absence of any other direction in which to grow." This cramped profusion of different lives and cultures only adds to the city, in White's opinion:

A poem compresses much in a small space and adds music, thus heightening its meaning. The city is like poetry: it compresses all life, all races and breeds, into a small island and adds music and the accompaniment of internal engines. The island of Manhattan is without any doubt the greatest human concentrate on earth, the poem whose magic is comprehensible to millions of permanent residents but whose full meaning will always remain elusive.

For all his rhapsodizing on the poetry of New York, though, White admits that the city can impart "a feeling of great forlornness or forsakenness," that it can often be "uncomfortable and inconvenient." But, as he puts it, "New Yorkers temperamentally do not crave comfort and convenience — if they did they would live elsewhere.”

After all, "the city makes up for its hazards and deficiencies by supplying its citizens with massive doses of a supplementary vitamin: the sense of belonging to something unique, cosmopolitan, mighty, and unparalleled."

And then there are the last two pages of the essay.

The subtlest change in New York is something people don’t speak much about but that is in everyone’s mind. The city, for the first time in its long history, is destructible. A single flight of planes no bigger than a wedge of geese can quickly end this island fantasy, burn the towers, crumble the bridges, turn the underground passages into lethal chambers, cremate the millions. The intimation of mortality is part of New York now: in the sound of jets overhead, in the black headlines of the latest edition.

White was writing about New York in the aftermath of World War II, after the introduction of the atomic bomb. But his words land squarely in the gut of any New Yorker who lived through 9/11, and of any American who currently lives under a president willing to make nuclear war the subject of angry tweets.

All dwellers in cities must live with the stubborn fact of annihilation; in New York the fact is somewhat more concentrated because of the concentration of the city itself, and because, of all targets, new York has a certain clear priority. In the mind of whatever perverted dreamer might loose the lightning, New York must hold a steady, irresistible charm.

White does not want to comfort his reader or assure the eternal safety of New York. He's not interested in hand-wringing or fear-mongering. He only tries to make sense of the fear. He's here to remind us of the things that must be protected in a time of political turbulence. Turning against each other is not an option for a city build on coexistence.

The city at last perfectly illustrates both the universal dilemma and the general solution, this riddle in steel and stone is at once the perfect target and the perfect demonstration of nonviolence, of racial brotherhood, this lofty target scraping the skies and meeting the destroying planes halfway, home of all people and all nations, capital of everything...

Finally, White compresses his own fear, New York's fear, the world's fear, into one last paragraph:

A block or two west of the new City of Man in Turtle Bay there is an old willow tree that presides over an interior garden. It is a battered tree, long-suffering and much climbed, held together by strands of wire but beloved of those who know it. In a way it symbolizes the city: life under difficulties, growth against odds, sap-rise in the midst of concrete, and the steady reaching for the sun. Whenever I look at it nowadays, and feel the cold shadow of the planes, I think: "This must be saved, this particular thing, this very tree." If it were to go, all would go—this city, this mischievous and marvelous monument which not to look upon would be like death.

From across the gulf of history, writing in New York of the 1940's, he manages to capture the mingled hope and terror that comes with life in any city today.