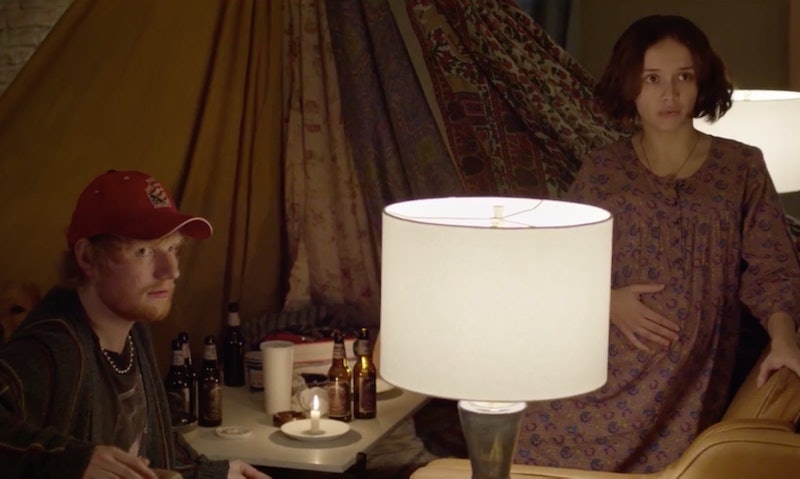 Spoilers ahead for Modern Love Episode 7, "Hers Was a World of One." Because he apparently can't resist inserting himself into any and every large gathering of celebrities, of course Ed Sheeran has a cameo in Modern Love, perhaps the most star-studded show to be released this year. He appears in the Amazon anthology series — based on the long-running New York Times column of the same name — in Episode 7, which was adapted from Dan Savage's 2005 essay "DJ's Homeless Mommy."

The episode follows a couple, Tobin (Andrew Scott, aka the Hot Priest himself) and Andy (Brandon Kyle Goodman), who are having trouble adopting. Enter Karla (Olivia Cooke), a pregnant woman experiencing homelessness who agrees to give them her baby. Much to Tobin's chagrin, Andy invites her to crash at their small, New York apartment as her due date draws closer, and the atmosphere goes from tense to uncomfortable when Karla brings a strange man home for dinner. Mick (Sheeran) is another person experiencing homelessness, and the mother-to-be explains to the annoyed couple that she's paying it forward by taking him in for the night.

It's a nice gesture, but Tobin and Andy are upset that she didn't ask for permission first. Nevertheless, Mick doesn't get the message and proceeds to hang around, creating an awkward dynamic in the room much in the way that Sheeran's abrupt presence interrupts an otherwise tender episode. Suffice it to say, we have a lot of questions, beginning with...

1. Why Does Sheeran Keep Doing These Weird Cameos?

Sheeran has made appearances in several TV shows and movies recently — most notably in Game of Thrones Season 7, in which he played a Lannister soldier named "ED." "Ed Sheeran's got a beautiful voice, and we knew he was a fan of the show, and we knew that Maisie [Williams] was obsessed with him," co-creator David Benioff said in a behind-the-scenes video. "So we always thought it'd be fun to try to get him into a Maisie scene at some point."

However, his cameo proved distasteful to many GoT fans. "I know what Game of Thrones fans hoped happened to my character," Sheeran told Buzzfeed in September 2018. "I'm sure they think my character got brutally, brutally murdered, but I think my character is still out there. I think he's chillin'. It was fun being in Game of Thrones, but I definitely think they should've killed me off in the episode. I reckon that probably would've been the redemption for people that didn't like it."

And in the Season 8 premiere, VF pointed out that Sheeran's character met a fiery end — or was badly burnt, at the very least. "That boy Eddie," a woman said. "Came back with his face burned right off. He's got no eyelids now."

The "Thinking out Loud" singer also appeared as himself in the 2019 rom-com Yesterday, as well as 2016 Bridget Jones's Baby, and voiced a character named Brendan in a 2018 episode of The Simpsons. Is he actually trying to get into acting? If so, he may want to hire a coach. Seeing him onscreen is just distracting.

3. What Story Was Karla Telling Mick?

When viewers first see Sheeran's character, he's sitting on the couch with Karla while she tells him the tail-end of a what sounds like a pretty wild story. "—smeared across my skin with his ugly face," she says.

"I like Sigourney Weaver," he says, even more eagerly. "Have you seen Avatar?"

What did the man with an ugly face smear across her skin? THESE are the important questions!!

4. Why Is He Doing That Accent?

Sheeran normally has a pretty nondescript British accent, but the one Mick has in Modern Love is much more regional — which Andrew Scott said in an interview with MR PORTER is a West Country accent. But...why? There's no mention of any Mick in Savage's original story, so it doesn't seem like Sheeran's character is based on anyone who he might be imitating.

After Tobin and Andy go back to bed, Karla rushes in, clutching her belly. "I think sex with Mick might have induced me." Hopefully she at least got her rocks off first, because child birth is not the most fun way to spend a post-coital moment.

Sheeran's appearance as Mick may be brief, but it's also bound to be memorable. We'll have to wait until we're surprised by another character with a terrible accent to see if he continues his random cameos, but his Modern Love role was certainly...something.