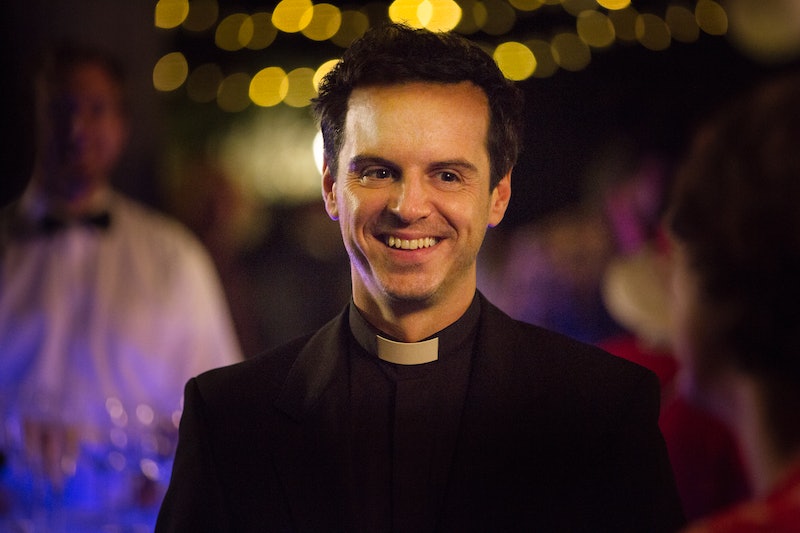 Phoebe Waller-Bridge's Fleabag is nothing if not irreverent, so naturally, there's a character in its second season called the "hot priest." He and the series protagonist appear to have a good rapport — flirtatious, even — as he's shown in the trailer saying he thought she'd "be in prison by now." "Ah well, I keep trying, but they just won't have me," she retorts. It's unclear if this new character has a real, actual name, but the actor certainly does: Fleabag's Hot Priest is played by Andrew Scott, and you've definitely seem him before.

As far as being cast as the show's sex symbol, Scott seems humbled. "This is uncharted territory for me, and that's what I'm always looking for," he told The Guardian. "It's a character I've never got to play, and it's such a big part of my life. Sex..." Here, the actor trailed off. However, it's clear he's ecstatic about the role, saying, "I feel so grateful to [Waller-Bridge] that she thought of me. The part develops in a really beautiful, brilliant way."

Indeed, Waller-Bridge told Bustle that the "hot priest" is a lot more than good looks. "I really wanted somebody who would be a match for Fleabag and yet, would be a challenge for her at the same time," she said. "And so he's a kind of complicated character and matches her in her complexity. But at the same time, he lives a totally different life from her."

So, just like every other Fleabag character, the "hot priest" is multi-faceted — and despite being a man of the cloth, able to match the protagonist's irreverent sense of humor. It's a role that only someone with Scott's pedigree could pull off, which he does with panache. Here's where you may have seen the prolific Fleabag actor before.

While Black Mirror Season 5 doesn't premiere until June 5, Scott is featured prominently in the trailer. He'll be in an upcoming episode called "Smithereens," per IMDb, although there's not much information about his character.

In 2018, Scott played Edgar in a modern reinterpretation of King Lear. The Fleabag actor loved working with Anthony Hopkins — who played the titular role — telling the Guardian, "I think [Hopkins is] the most engaging actor I've ever worked with. I find something very moving about the fact that he's 81 and at the top of his game." And anyone who's seen Westworld can certainly attest to that fact.

Scott's most notable role to date was as Sherlock Holmes's arch-nemesis, Moriarty, in the BBC series. And while IGN named his character the 10th best villain of all time — just after Lex Luthor and Hannibal Lecter — it seems that Scott is weary of the role. In fact, he didn't even want to discuss Moriarty during his Guardian interview. "I was a little bit tired of playing the freak," he told the outlet. "What I really look for, and what attracts me in other people, is vulnerability." Indeed, it's clear that Scott doesn't like being "known for playing monstrous people," which is why Fleabag is likely so refreshing for him. However, it's understandable why he keeps getting those parts, since he's so good at them.

Further justifying Scott's desire to break away from the villain stereotype is his part in the 2015 James Bond film, Spectre, in which he also played the bad guy. "I don't think, when I was 20, people said, 'He's going to make a great villain,'" he told the Guardian, adding, "Don't get me wrong, I love those parts."

In 2015, Scott appeared as Inspector Turpin in a retelling of Mary Shelly's Frankenstein alongside James McAvoy and Daniel Radcliffe.

Fortunately, Scott was able to break away from typecasting in 2014, when he played a character named Gethin in Pride. The movie, which is based on a true story, is set in 1984 and centers around a gay and lesbian group defending a Welsh mining community, whose mine is in danger of closing. As a result of their support, the townspeople are forced to confront their own prejudices about the LGBTQIA+ community.

So, after you've devoured Fleabag Season 2 — which you almost certainly will — you can still go back and watch Scott's other notable performances, some of which you may have missed. And though they may pale in comparison to the "hot priest," you can blame that on Phoebe Waller-Bridge and her whip-smart writing.