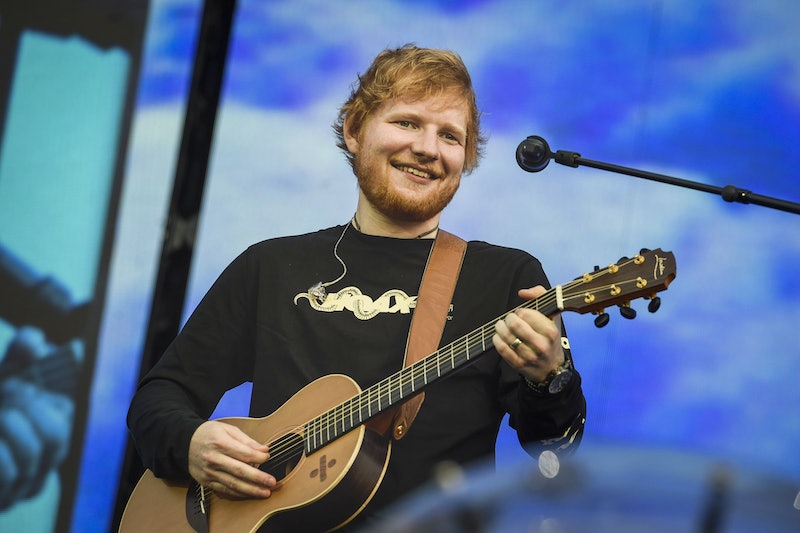 When it comes to Blue Peter, one of the first things that springs to mind is the iconic Blue Peter badge, and one major name from the world of music has teamed up with the BBC in order to create a very special edition of the famous accessory. Yes, singer-songwriter Ed Sheeran has designed a Blue Peter badge to help celebrate BBC Music Day 2019, and once again the "Shape of You" singer has proved himself to be a man of many talents.

As reported by the Radio Times, the Grammy Award-winner designed the music-themed badge for the iconic children's show Blue Peter to mark BBC Music Day 2019, which aims to "inspire" the future generation of musicians. Blue Peter presenter Lindsey Russell revealed the exciting news on social media, and later spoke to BBC Radio 2 presenter Zoe Ball about the badge in question.

Sheeran's multi-coloured design boasts illustrated musical notes, a microphone, a keyboard, as well as the iconic Blue Peter logo — and although the badge has already been unveiled, the official launch will take place during a special live episode of Blue Peter on Thursday, September 26 — which will also feature the legendary Sir Paul McCartney.

As reported by the Radio Times, the "Thinking Out Loud" singer earned himself a gold Blue Peter badge just last year, and according to the BBC, Sheeran said he was "made up" to be asked to design the show's latest badge. In a statement, the singer said, "I’ve always loved Blue Peter and even got the chance to present the show a while back, so I’m made up that I got to design their first-ever badge for BBC Music Day. Music was really important to me growing up and I hope this badge will inspire more kids to get into it."

And it appears Sheeran isn't the only one excited about the Music Day-inspired design, because when speaking to the BBC, Blue Peter presenter Russell revealed, "I am so excited that Blue Peter is launching a brand new Music badge on BBC Music Day. We want children all over the UK to try a new musical experience and earn their badge."

According to the event's official website, BBC Music Day is an annual celebration of the power of music, which intends to change peoples lives in the UK and beyond. Music Day 2019 will see 2,000 events take place across the country, including more than 100 TV, radio, and digital broadcasts. This year's theme is music and wellbeing, and the event will aim to put a spotlight on the power of music, and set out to bring people together and make a positive impact. In addition to the many exciting events taking place on Music Day 2019, the BBC initiative will also work alongside over 100 organisations, including the Get Singing campaign — which is expected to reach 270,00 children, and encourage school pupils across the UK to belt out their favourite tunes.