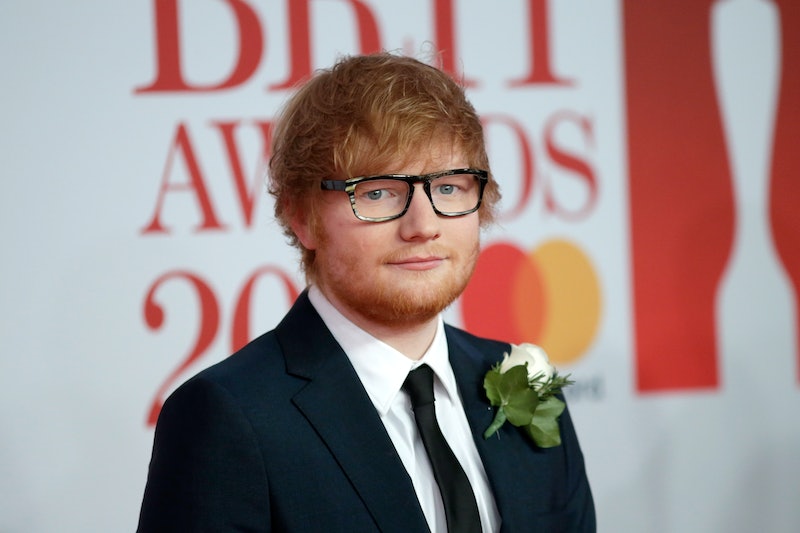 After much speculation, fans can rest easy in knowing Ed Sheeran isn't wearing a wedding ring. At the 2018 BRIT Awards red carpet on Wednesday, the Divide singer briefly commented on the band around his left ring finger. "It’s an engagement ring, 'cause I feel like — I dunno, I feel like it’s good to both do things," he informed Sky News. The outlet also asked him when he's getting married to Cherry Seaborn, to which he simply replied, "It will be a situation like this where no one knows."

First of all, it's no surprise that Sheeran isn't discussing his impending nuptials in detail. He's always been one to keep his personal life pretty close to his chest. Basically, he could get married tomorrow and no one would know. That's just who the 27-year-old musician is and who can blame him for wanting to keep his relationship with Seaborn as private as possible?

Secondly, let's talk about Sheeran's gesture of wearing an engagement ring. It's untraditional for a man in a relationship with a woman to wear one. One fan reacted to the news, "Wait what? Guys wear engagement rings too!?"

Yes, typically, it's the woman who is given a diamond ring after being proposed to by a man, but the "Perfect" singer is OK with steering away from tradition. It's sweet that he wants to wear an engagement ring to demonstrate his love and that he will soon be married to Seaborn. And by choosing to wear one, Sheeran is also defying gender norms and showing that both men and women can wear engagement rings, just like they both wear wedding rings.

On Tuesday, People reported during a Monday concert in London Sheeran was spotted wearing a ring that some thought could be a wedding ring, especially since he and Seaborn got engaged over the holidays. Then, when he showed up at the BRIT Awards Wednesday, fans really started freaking out that maybe the "Castle on the Hill" singer already said "I do".

This isn't the first time Sheeran was seen wearing a ring on that finger, either. In July 2016, he posed with musician Jovel and his daughter in an Instagram photo, where he was also sporting a silver ring on the important finger. At the time, Sheeran was with Seaborn, so the speculation made sense. However, it, obviously, wasn't a wedding ring — just like this time it isn't one.

Sheeran and Seaborn truly have a loving relationship, and their story is like something right out of a movie. In March 2017, the "Shape of You" singer opened up to People about how they started dating, and it's adorable. “I’ve known Cherry since I was 11. She worked on Wall Street in New York, and I had like six shows [around New York in 2015]. It was around then, and we reconnected." He continued, "I went on tour again, and then I went to Taylor's [Swift] Fourth of July party. I was texting [Seaborn], and she was like, 'I’m in Rhode Island at a 4th of July party,' and I was like, 'So am I.' I kinda said to Taylor, 'Can I invite one of my old schoolmates?' The rest is history."

They clearly are meant to be. Here's hoping Sheeran will be somewhat open with his fans when it comes to their wedding, like by sharing at least one picture from their special day. But, he sure likes to play it coy and keep his relationship status on the down low. There's even a good chance that next time Sheeran is seen, he'll already be married. If or when he does tie the knot, he'll definitely announce it on his own terms.